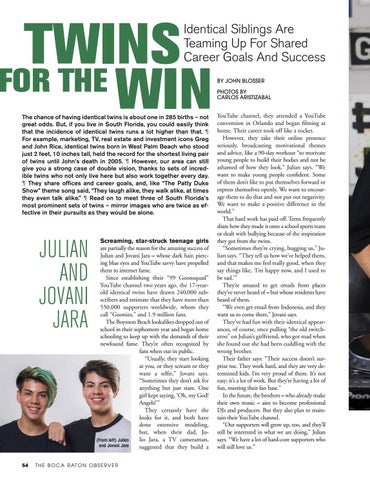 TWINS FOR THE WIN

Identical Siblings Are Teaming Up For Shared Career Goals And Success

The chance of having identical twins is about one in 285 births – not great odds. But, if you live in South Florida, you could easily think that the incidence of identical twins runs a lot higher than that. ¶ For example, marketing, TV, real estate and investment icons Greg and John Rice, identical twins born in West Palm Beach who stood just 2 feet, 10 inches tall, held the record for the shortest living pair of twins until John’s death in 2005. ¶ However, our area can still give you a strong case of double vision, thanks to sets of incredible twins who not only live here but also work together every day. ¶ They share offices and career goals, and, like “The Patty Duke Show” theme song said, “They laugh alike, they walk alike, at times they even talk alike.” ¶ Read on to meet three of South Florida’s most prominent sets of twins – mirror images who are twice as effective in their pursuits as they would be alone.

Screaming, star-struck teenage girls are partially the reason for the amazing success of Julian and Jovani Jara – whose dark hair, piercing blue eyes and YouTube savvy have propelled them to internet fame. Since establishing their “99 Goonsquad” YouTube channel two years ago, the 17-yearold identical twins have drawn 240,000 subscribers and estimate that they have more than 550,000 supporters worldwide, whom they call “Goonies,” and 1.9 million fans. The Boynton Beach lookalikes dropped out of school in their sophomore year and began home schooling to keep up with the demands of their newfound fame. They’re often recognized by fans when out in public. “Usually, they start looking at you, or they scream or they want a selfie,” Jovani says. “Sometimes they don’t ask for anything but just stare. One girl kept saying, ‘Oh, my God! Angels!’” They certainly have the looks for it, and both have done extensive modeling, but, when their dad, Julio Jara, a TV cameraman, (From left) Julian and Jovani Jara suggested that they build a

YouTube channel, they attended a YouTube convention in Orlando and began filming at home. Their career took off like a rocket. However, they take their online presence seriously, broadcasting motivational themes and advice, like a 90-day workout “to motivate young people to build their bodies and not be ashamed of how they look,” Julian says. “We want to make young people confident. Some of them don’t like to put themselves forward or express themselves openly. We want to encourage them to do that and not put out negativity. We want to make a positive difference in the world.” That hard work has paid off. Teens frequently share how they made it onto a school sports team or dealt with bullying because of the inspiration they got from the twins. “Sometimes they’re crying, hugging us,” Julian says. “They tell us how we’ve helped them, and that makes me feel really good, when they say things like, ‘I’m happy now, and I used to be sad.’” They’re amazed to get emails from places they’ve never heard of – but whose residents have heard of them. “We even get email from Indonesia, and they want us to come there,” Jovani says. They’ve had fun with their identical appearances, of course, once pulling “the old switcheroo” on Julian’s girlfriend, who got mad when she found out she had been cuddling with the wrong brother. Their father says: “Their success doesn’t surprise me. They work hard, and they are very determined kids. I’m very proud of them. It’s not easy; it’s a lot of work. But they’re having a lot of fun, meeting their fan base.” In the future, the brothers – who already make their own music – aim to become professional DJs and producers. But they also plan to maintain their YouTube channel. “Our supporters will grow up, too, and they’ll still be interested in what we are doing,” Julian says. “We have a lot of hard-core supporters who will still love us.”