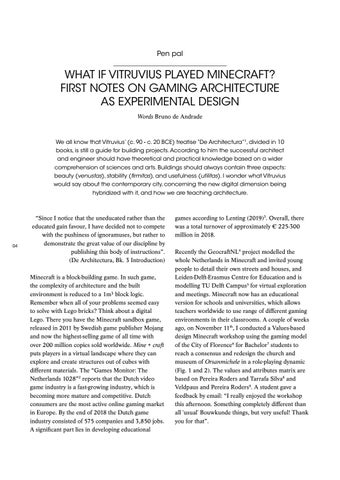 We all know that Vitruvius’ (c. 90 - c. 20 BCE) treatise “De Architectura”1, divided in 10 books, is still a guide for building projects. According to him the successful architect and engineer should have theoretical and practical knowledge based on a wider comprehension of sciences and arts. Buildings should always contain three aspects: beauty (venustas), stability (firmitas), and usefulness (utilitas). I wonder what Vitruvius would say about the contemporary city, concerning the new digital dimension being hybridized with it, and how we are teaching architecture.

“Since I notice that the uneducated rather than the educated gain favour, I have decided not to compete with the pushiness of ignoramuses, but rather to demonstrate the great value of our discipline by publishing this body of instructions”. (De Architectura, Bk. 3 Introduction) Minecraft is a block-building game. In such game, the complexity of architecture and the built environment is reduced to a 1m³ block logic. Remember when all of your problems seemed easy to solve with Lego bricks? Think about a digital Lego. There you have the Minecraft sandbox game, released in 2011 by Swedish game publisher Mojang and now the highest-selling game of all time with over 200 million copies sold worldwide. Mine + craft puts players in a virtual landscape where they can explore and create structures out of cubes with different materials. The “Games Monitor: The Netherlands 1028”2 reports that the Dutch video game industry is a fast-growing industry, which is becoming more mature and competitive. Dutch consumers are the most active online gaming market in Europe. By the end of 2018 the Dutch game industry consisted of 575 companies and 3,850 jobs. A significant part lies in developing educational

games according to Lenting (2019)3. Overall, there was a total turnover of approximately € 225-300 million in 2018. Recently the GeocraftNL4 project modelled the whole Netherlands in Minecraft and invited young people to detail their own streets and houses, and Leiden-Delft-Erasmus Centre for Education and is modelling TU Delft Campus5 for virtual exploration and meetings. Minecraft now has an educational version for schools and universities, which allows teachers worldwide to use range of different gaming environments in their classrooms. A couple of weeks ago, on November 11th, I conducted a Values-based design Minecraft workshop using the gaming model of the City of Florence6 for Bachelor7 students to reach a consensus and redesign the church and museum of Orsanmichele in a role-playing dynamic (Fig. 1 and 2). The values and attributes matrix are based on Pereira Roders and Tarrafa Silva8 and Veldpaus and Pereira Roders9. A student gave a feedback by email: “I really enjoyed the workshop this afternoon. Something completely different than all 'usual' Bouwkunde things, but very useful! Thank you for that”. 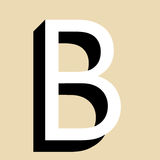