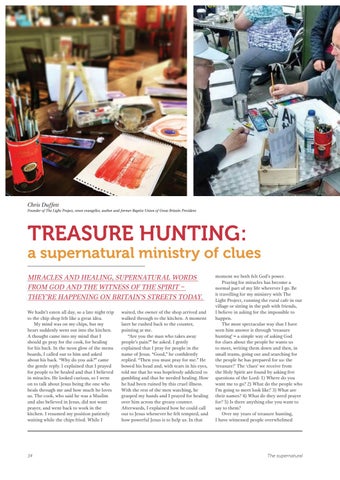 a supernatural ministry of clues MIRACLES AND HEALING, SUPERNATURAL WORDS FROM GOD AND THE WITNESS OF THE SPIRIT – THEY’RE HAPPENING ON BRITAIN’S STREETS TODAY. We hadn’t eaten all day, so a late night trip to the chip shop felt like a great idea. My mind was on my chips, but my heart suddenly went out into the kitchen. A thought came into my mind that I should go pray for the cook, for healing for his back. In the neon glow of the menu boards, I called out to him and asked about his back. “Why do you ask?” came the gentle reply. I explained that I prayed for people to be healed and that I believed in miracles. He looked curious, so I went on to talk about Jesus being the one who heals through me and how much he loves us. The cook, who said he was a Muslim and also believed in Jesus, did not want prayer, and went back to work in the kitchen. I resumed my position patiently waiting while the chips fried. While I

waited, the owner of the shop arrived and walked through to the kitchen. A moment later he rushed back to the counter, pointing at me. “Are you the man who takes away people’s pain?” he asked. I gently explained that I pray for people in the name of Jesus. “Good,” he confidently replied. “Then you must pray for me.” He bowed his head and, with tears in his eyes, told me that he was hopelessly addicted to gambling and that he needed healing. How he had been ruined by this cruel illness. With the rest of the men watching, he grasped my hands and I prayed for healing over him across the greasy counter. Afterwards, I explained how he could call out to Jesus whenever he felt tempted, and how powerful Jesus is to help us. In that

moment we both felt God’s power. Praying for miracles has become a normal part of my life wherever I go. Be it travelling for my ministry with The Light Project, running the rural cafe in our village or sitting in the pub with friends, I believe in asking for the impossible to happen. The most spectacular way that I have seen him answer is through ‘treasure hunting’ – a simple way of asking God for clues about the people he wants us to meet, writing them down and then, in small teams, going out and searching for the people he has prepared for us: the ‘treasure!’ The ‘clues’ we receive from the Holy Spirit are found by asking five questions of the Lord: 1) Where do you want me to go? 2) What do the people who I’m going to meet look like? 3) What are their names? 4) What do they need prayer for? 5) Is there anything else you want to say to them?  Over my years of treasure hunting, I have witnessed people overwhelmed 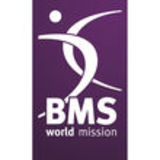