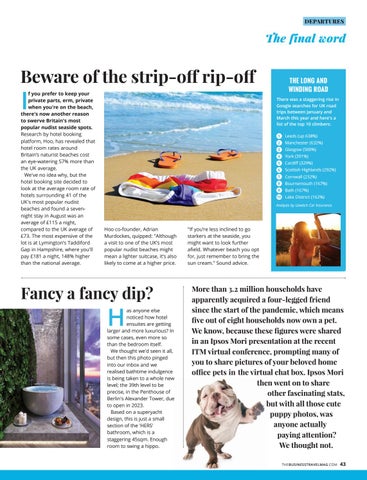 Beware of the strip-off rip-off

f you prefer to keep your private parts, erm, private when you're on the beach, there's now another reason to swerve Britain's most popular nudist seaside spots. Research by hotel booking platform, Hoo, has revealed that hotel room rates around Britain’s naturist beaches cost an eye-watering 57% more than the UK average. We've no idea why, but the hotel booking site decided to look at the average room rate of hotels surrounding 41 of the UK's most popular nudist beaches and found a sevennight stay in August was an average of £115 a night, compared to the UK average of £73. The most expensive of the lot is at Lymington’s Taddiford Gap in Hampshire, where you'll pay £181 a night, 148% higher than the national average.

The Long and winding road There was a staggering rise in Google searches for UK road trips between January and March this year and here's a list of the top 10 climbers: 1

Hoo co-founder, Adrian Murdockes, quipped: "Although a visit to one of the UK’s most popular nudist beaches might mean a lighter suitcase, it’s also likely to come at a higher price.

as anyone else noticed how hotel ensuites are getting larger and more luxurious? In some cases, even more so than the bedroom itself. We thought we'd seen it all, but then this photo pinged into our inbox and we realised bathtime indulgence is being taken to a whole new level; the 39th level to be precise, in the Penthouse of Berlin's Alexander Tower, due to open in 2023. Based on a superyacht design, this is just a small section of the 'HERS' bathroom, which is a staggering 45sqm. Enough room to swing a hippo.

"If you’re less inclined to go starkers at the seaside, you might want to look further afield. Whatever beach you opt for, just remember to bring the sun cream." Sound advice.

More than 3.2 million households have apparently acquired a four-legged friend since the start of the pandemic, which means five out of eight households now own a pet. We know, because these figures were shared in an Ipsos Mori presentation at the recent ITM virtual conference, prompting many of you to share pictures of your beloved home office pets in the virtual chat box. Ipsos Mori then went on to share other fascinating stats, but with all those cute puppy photos, was anyone actually paying attention? We thought not. THEBUSINESSTRAVELMAG.com