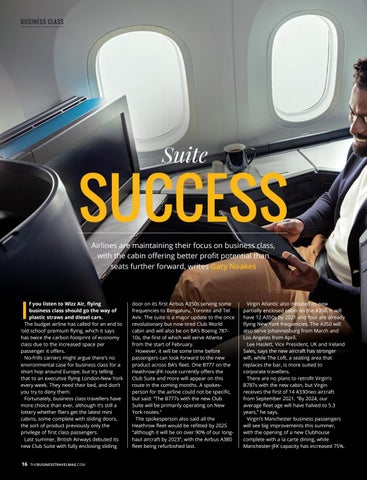 f you listen to Wizz Air, flying business class should go the way of plastic straws and diesel cars. The budget airline has called for an end to ‘old school’ premium flying, which it says has twice the carbon footprint of economy class due to the increased space per passenger it offers. No-frills carriers might argue there’s no environmental case for business class for a short hop around Europe, but try telling that to an executive flying London-New York every week. They need their bed, and don’t you try to deny them. Fortunately, business class travellers have more choice than ever, although it’s still a lottery whether fliers get the latest mini cabins, some complete with sliding doors, the sort of product previously only the privilege of first class passengers. Last summer, British Airways debuted its new Club Suite with fully enclosing sliding 16

door on its first Airbus A350s serving some frequencies to Bengaluru, Toronto and Tel Aviv. The suite is a major update to the once revolutionary but now tired Club World cabin and will also be on BA’s Boeing 78710s, the first of which will serve Atlanta from the start of February. However, it will be some time before passengers can look forward to the new product across BA’s fleet. One B777 on the Heathrow-JFK route currently offers the Club Suite and more will appear on this route in the coming months. A spokesperson for the airline could not be specific, but said: “The B777s with the new Club Suite will be primarily operating on New York routes.” The spokesperson also said all the Heathrow fleet would be refitted by 2025 “although it will be on over 90% of our longhaul aircraft by 2023”, with the Airbus A380 fleet being refurbished last.

Virgin Atlantic also debuted its new partially enclosed cabin on the A350. It will have 12 A350s by 2021 and four are already flying New York frequencies. The A350 will also serve Johannesburg from March and Los Angeles from April. Lee Haslett, Vice President, UK and Ireland Sales, says the new aircraft has stronger wifi, while The Loft, a seating area that replaces the bar, is more suited to corporate travellers. There are no plans to retrofit Virgin’s B787s with the new cabin, but Virgin receives the first of 14 A330neo aircraft from September 2021. “By 2024, our average fleet age will have halved to 5.3 years,” he says. Virgin’s Manchester business passengers will see big improvements this summer, with the opening of a new Clubhouse complete with a la carte dining, while Manchester-JFK capacity has increased 75%.