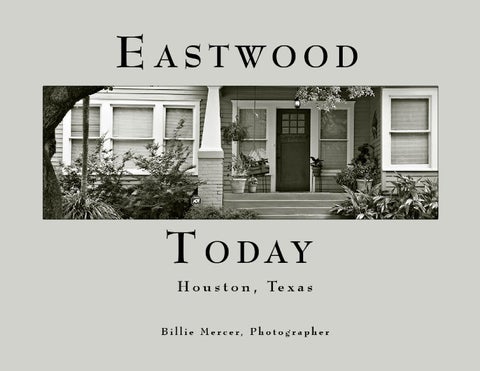 Introduction The bus from downtown Houston to Pecan Park where I lived while I was a kid traveled out McKinney Street---maybe Polk street. I am not sure now which one but the route was through a tunnel of huge oaks whose limbs reached over the street. As I peered through the windows of the bus, I thought that surely rich people must live in these wonderful homes. I didnâ&amp;#x20AC;&amp;#x2122;t know it at the time but this neighborhood was called Eastwood. Times change and by the late 1950&#39;s things were definitely changing in urban neighborhoods. Young couples wanted new modern homes and new homes were being built further out from the inner-city. The older homes became rentals and maintenance was neglected in some of them. By the 1980&#39;s things were changing again. The migration to the suburbs was being reversed and neighborhoods like Eastwood began to be rejuvenated. A few years ago we bought a lot in Eastwood. We may build a house on our lot and live there so I definitely feel a strong connection to this neighborhood and to the east side of Houston where my husband, Ned, and I grew up and went to school. When I considered what I wanted to photograph for the Solo Photography Book Month, I thought about photographing some of the homes in Eastwood because the homes reflect the people who live there now, who have lived there in the past, the changing inner-city and because it is a connection to my childhood. Due of the 31-day time limit, I chose to only photograph on three of the streets, Rusk, Walker and McKinney between the 4400 and 4800 blocks. I didnâ&amp;#x20AC;&amp;#x2122;t choose the best or the worst of houses. I chose the ones that spoke to me.

I owe a special thanks to Bill England for his generosity. His 2004 essays in the Eastwood Civic Association newsletter helped me really â&amp;#x20AC;&amp;#x153;seeâ&amp;#x20AC;? the neighborhood. He gave me permission to use his essay Eastwood: A Master Plan. In the text with the two-page spreads I have also used some of his research on the history of the homes. My friend, Deb Hall, was in a way my collaborator as we both figured out a lot of the technical details to put a PDF book together. Some days we littered cyberspace with our emails about our personal projects. But that kept me focused. I also want to acknowledge Paul Butzi for initiating Solo Photography Book Month in 2008 but especially for giving me the nudge to participate this year. And of course, a special thank you to my husband, Ned, who often doubles as my driver, assistant and tripod bearer. But most of all, I thank him for his patience and encouragement. I hope that you enjoy reading my SoFoBoMo 2009 book, Eastwood Today. Billie Mercer San Miguel de Allende Mexico

William A. Wilson had a vision for Eastwood, his new suburban neighborhood. His plan was to develop 215 acres of land into a “distinctively high-class home center . . . a tangible example of modern community development.” This vision included the development of the “social center idea” among Eastwood residents and a “community spirit of mutual benefit for the good of all . . . ” To William Wilson, it was not just about building homes-it was about creating a community of homes, a total lifestyle “where people who seek all that is best in life may live amid ideal surroundings.” That’s why his master plan included green space for Eastwood Park, land for Eastwood Community Church (an offshoot of Houston’s downtown Christ Church Episcopal Cathedral) and land for Eastwood School (now Dora P. Lantrip Elementary-the oldest in-use school in the Houston Independent School District system). Wilson wanted Eastwood to be an incubator for “the enrichment of life.” It was considered a bold social experiment in 1911. It is still considered so today. The master plan initially envisioned 1,000 terraced lots. Much of that terracing came from the diggings of the Houston Ship Channel. At some point, Wilson sold part of the property to other developers and today Eastwood has approximately 800 homes. Developed in 1911 with the first lots for sale in June 1912, Eastwood was officially opened in September 1913. In research of the neighborhood, The Eastwood Historical Commission found some homes built prior to the official platting of the neighborhood. Some of them were built as early as 1900-1909.

Eastwood was a 15-minute ride from downtown on the streetcar. Streets were paved with a 6-inch base of gravel covered with two inches of crushed red granite. The same red granite used in the paving at Rice Institute. The master plan also included cement curbs and sidewalks, city water, gas, electricity and sanitary sewerage. The utilities were all placed at the rear of the properties to eliminate unsightly utility poles and lines marring the street scape. There was a boulevard driveway skirting the intertwining ravine running through Eastwood which “lends a beautiful vista to the entire scheme.” The ravine was filled in many years ago and is now the esplanade dividing Park Drive. Wilson’s plan allowed for the drainage of the terraced lots to be “perfect,” with all surplus water immediately carried to the ravine, emptying into Brays Bayou southeast of the neighborhood. And, of course, his plan called for symmetrically placed oak and sycamore trees to line the streets. Many of these trees remain today and create beautiful corridors of green. And his plan paid off. By October 1913, Eastwood was hailed by The Houston Daily Post as “A model suburb . . . one of the most convenient, attractive and beautiful homesite additions in the city of Houston.” Wilson’s newspaper ads assured potential buyers that Eastwood was “The home place of discriminating people, who are particular where they live.”

Photography is the way I see the world. One image, another image and then another. It is the way I organize all the visual data that surrounds me. Most of the time I photograph the commonplace. Since I was a kid I have always had a camera but about 30 years ago a college photography class opened doors to the creative side of photography. Since then photography has been my passion. The photographers who influenced me were John Sexton, Frank Armstrong, David Plowden, Josef Sudek, Linda Butler and Keith Carter. So needless to say up until about 6 years ago all of my work was in black and white. Now about sixty percent of my work is in color. I like to work on projects so that I continue to explore an idea and dig below the surface. Some projects or themes are long-term and on-going. I suspect that Eastwood will be a continuing project. I am currently using a digital camera but a lot of my work has been done with film in a plastic toycamera called a Holga. My photographs have been in a number of one-person and group shows. They can also be found in the public collections of the Harry Ransom Humanities Center at the University of Texas, The Museum of Fine Arts in Houston, and in the Federal Reserve Bank in Houston. I also have work in a number of private collections. My husband, Ned and I are retired. We are Texans but after traveling for many years in Mexico we are currently living in San Miguel de Allende, Mexico.