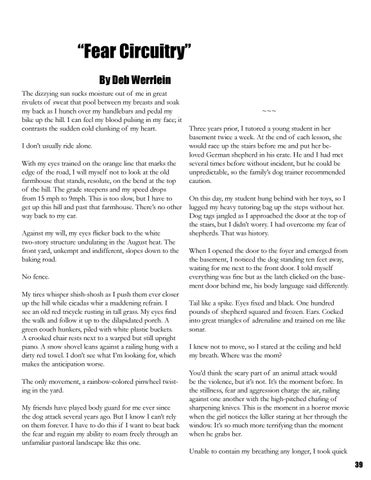 The dizzying sun sucks moisture out of me in great rivulets of sweat that pool between my breasts and soak my back as I hunch over my handlebars and pedal my bike up the hill. I can feel my blood pulsing in my face; it contrasts the sudden cold clunking of my heart. I don’t usually ride alone.

~~~ Three years prior, I tutored a young student in her basement twice a week. At the end of each lesson, she would race up the stairs before me and put her beloved German shepherd in his crate. He and I had met several times before without incident, but he could be unpredictable, so the family’s dog trainer recommended caution.

With my eyes trained on the orange line that marks the edge of the road, I will myself not to look at the old farmhouse that stands, resolute, on the bend at the top of the hill. The grade steepens and my speed drops from 15 mph to 9mph. This is too slow, but I have to On this day, my student hung behind with her toys, so I get up this hill and past that farmhouse. There’s no other lugged my heavy tutoring bag up the steps without her. way back to my car. Dog tags jangled as I approached the door at the top of the stairs, but I didn’t worry. I had overcome my fear of Against my will, my eyes flicker back to the white shepherds. That was history. two-story structure undulating in the August heat. The front yard, unkempt and indifferent, slopes down to the When I opened the door to the foyer and emerged from baking road. the basement, I noticed the dog standing ten feet away, waiting for me next to the front door. I told myself No fence. everything was fine but as the latch clicked on the basement door behind me, his body language said differently. My tires whisper shish-shosh as I push them ever closer up the hill while cicadas whir a maddening refrain. I Tail like a spike. Eyes fixed and black. One hundred see an old red tricycle rusting in tall grass. My eyes find pounds of shepherd squared and frozen. Ears. Cocked the walk and follow it up to the dilapidated porch. A into great triangles of adrenaline and trained on me like green couch hunkers, piled with white plastic buckets. sonar. A crooked chair rests next to a warped but still upright piano. A snow shovel leans against a railing hung with a I knew not to move, so I stared at the ceiling and held dirty red towel. I don’t see what I’m looking for, which my breath. Where was the mom? makes the anticipation worse. You’d think the scary part of an animal attack would The only movement, a rainbow-colored pinwheel twistbe the violence, but it’s not. It’s the moment before. In ing in the yard. the stillness, fear and aggression charge the air, railing against one another with the high-pitched chafing of My friends have played body guard for me ever since sharpening knives. This is the moment in a horror movie the dog attack several years ago. But I know I can’t rely when the girl notices the killer staring at her through the on them forever. I have to do this if I want to beat back window. It’s so much more terrifying than the moment the fear and regain my ability to roam freely through an when he grabs her. unfamiliar pastoral landscape like this one. Unable to contain my breathing any longer, I took quick 39