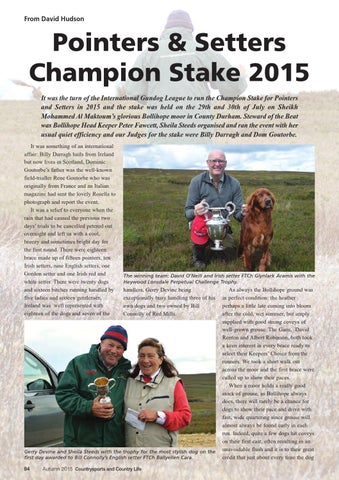 Pointers & Setters Champion Stake 2015 It was the turn of the International Gundog League to run the Champion Stake for Pointers and Setters in 2015 and the stake was held on the 29th and 30th of July on Sheikh Mohammed Al Maktoum’s glorious Bollihope moor in County Durham. Steward of the Beat was Bollihope Head Keeper Peter Fawcett, Sheila Steeds organised and ran the event with her usual quiet efficiency and our Judges for the stake were Billy Darragh and Dom Goutorbe. It was something of an international affair: Billy Darragh hails from Ireland but now lives in Scotland, Dominic Goutorbe’s father was the well-known field-trialler Rene Goutorbe who was originally from France and an Italian magazine had sent the lovely Rosella to photograph and report the event. It was a relief to everyone when the rain that had caused the previous two days’ trials to be cancelled petered out overnight and left us with a cool, breezy and sometimes bright day for the first round. There were eighteen brace made up of fifteen pointers, ten Irish setters, nine English setters, one Gordon setter and one Irish red and white setter. There were twenty dogs and sixteen bitches running handled by five ladies and sixteen gentlemen. Ireland was well represented with eighteen of the dogs and seven of the

handlers, Gerry Devine being exceptionally busy handling three of his own dogs and two owned by Bill Connolly of Red Mills.

Gerry Devine and Sheila Steeds with the trophy for the most stylish dog on the first day awarded to Bill Connolly’s English setter FTCh Ballyellen Cara. 84

As always the Bollihope ground was in perfect condition: the heather perhaps a little late coming into bloom after the cold, wet summer, but amply supplied with good strong coveys of well-grown grouse. The Guns, David Renton and Albert Robinson, both took a keen interest in every brace ready to select their Keepers’ Choice from the runners. We took a short walk out across the moor and the first brace were called up to show their paces. When a moor holds a really good stock of grouse, as Bollihope always does, there will rarely be a chance for dogs to show their pace and drive with fast, wide quartering since grouse will almost always be found early in each run. Indeed, quite a few dogs hit coveys on their first cast, often resulting in an unavoidable flush and it is to their great credit that just about every time the dog The Autumn 2015 edition of Irish Country Sports and Country Life.

The Autumn 2015 edition of Irish Country Sports and Country Life.