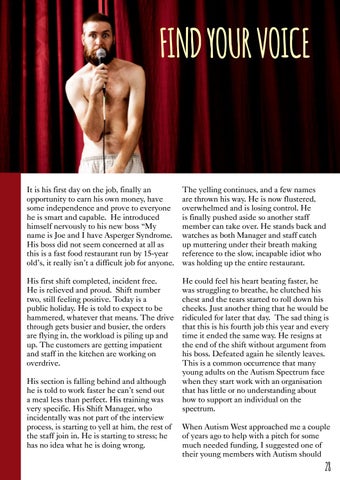 It is his first day on the job, finally an opportunity to earn his own money, have some independence and prove to everyone he is smart and capable. He introduced himself nervously to his new boss “My name is Joe and I have Asperger Syndrome. His boss did not seem concerned at all as this is a fast food restaurant run by 15-year old’s, it really isn’t a difficult job for anyone.

The yelling continues, and a few names are thrown his way. He is now flustered, overwhelmed and is losing control. He is finally pushed aside so another staff member can take over. He stands back and watches as both Manager and staff catch up muttering under their breath making reference to the slow, incapable idiot who was holding up the entire restaurant.

His first shift completed, incident free. He is relieved and proud. Shift number two, still feeling positive. Today is a public holiday. He is told to expect to be hammered, whatever that means. The drive through gets busier and busier, the orders are flying in, the workload is piling up and up. The customers are getting impatient and staff in the kitchen are working on overdrive.

He could feel his heart beating faster, he was struggling to breathe, he clutched his chest and the tears started to roll down his cheeks. Just another thing that he would be ridiculed for later that day. The sad thing is that this is his fourth job this year and every time it ended the same way. He resigns at the end of the shift without argument from his boss. Defeated again he silently leaves. This is a common occurrence that many young adults on the Autism Spectrum face when they start work with an organisation that has little or no understanding about how to support an individual on the spectrum.

His section is falling behind and although he is told to work faster he can’t send out a meal less than perfect. His training was very specific. His Shift Manager, who incidentally was not part of the interview process, is starting to yell at him, the rest of the staff join in. He is starting to stress; he has no idea what he is doing wrong.

When Autism West approached me a couple of years ago to help with a pitch for some much needed funding, I suggested one of their young members with Autism should 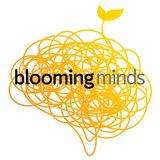 A magazine to develop your knowledge of mental health and well-being for yourself and others and to help you Bloom. Blooming Minds works wit...

A magazine to develop your knowledge of mental health and well-being for yourself and others and to help you Bloom. Blooming Minds works wit...