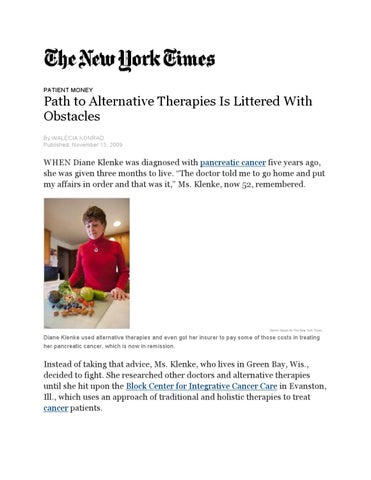 Path to Alternative Therapies Is Littered With Obstacles By WALECIA KONRAD Published: November 13, 2009

WHEN Diane Klenke was diagnosed with pancreatic cancer five years ago, she was given three months to live. â&#x20AC;&#x153;The doctor told me to go home and put my affairs in order and that was it,â&#x20AC;? Ms. Klenke, now 52, remembered.

Diane Klenke used alternative therapies and even got her insurer to pay some of those costs in treating her pancreatic cancer, which is now in remission.

Instead of taking that advice, Ms. Klenke, who lives in Green Bay, Wis., decided to fight. She researched other doctors and alternative therapies until she hit upon the Block Center for Integrative Cancer Care in Evanston, Ill., which uses an approach of traditional and holistic therapies to treat cancer patients.

After undergoing intense chemotherapy along with proper nutrition, nausea and stress management therapies at the Block Center, Ms. Klenke’s cancer went into remission and has stayed that way. So where is this anecdote heading? Glad you asked. Cancer and its treatment are so complicated and relatively unpredictable that this column is in no way meant to advocate Ms. Klenke’s approach to dealing with her disease. As a Patient Money columnist, I don’t pretend to have that expertise. Instead, my purpose here is to provide financial guidance for those who, like Ms. Klenke, choose to take the medical path less traveled. Besides learning the ins and outs of complementary and alternative medicine, Ms. Klenke has also become something of an expert on how to pay for these treatments. With the help of the Block center and her own research and persistence, she persuaded her insurance company to cover her entire course of treatment and the follow-up treatments that she continues to pursue, as she puts it, “to boost my immune system and keep me cancer free.” So-called complementary and alternative medicine — or CAM, as it is known by practitioners and adherents — is becoming more mainstream every day. In 2007, more than one in three adults and nearly one in eight children, according to a federal study sponsored by the National Center for Complementary and Alternative Medicine, a division of the National Institutes of Health, used some form of CAM — from self-prescribed nutritional substitutes to repeat visits to alternative health care practitioners. So commonplace are the alternative providers that chiropractors and accupuncturists, for example, are now licensed by most states. At the same time, many traditional medical doctors, recognizing patients’ demand for alternative therapies, have signed up for training in alternative therapies or added alternative professionals to their staffs.

Alternative medicine is also a big business. Americans spent nearly $40 billion out of pocket on alternative therapies, according to that same 2007 study, to pay both for practitioners and vitamins and supplements. Often, the treatments aren’t cheap. A session at the acupuncturist can easily run $100. And, as with pharmaceuticals, vitamins, herbal supplements and homeopathic remedies have a huge price range — from a $12 bottle of vitamins to supplements costing hundreds of dollars. More insurance companies are now offering full or limited coverage, or arranging discounts, on these treatments. But, as Ms. Klenke learned, getting even limited coverage can be time-consuming and tricky. And most people pursuing alternative therapies should expect to pay some, if not all, costs out of pocket, says Mark Stengler, a naturopathic doctor in La Jolla, near San Diego who is licensed in California. He holds a doctorate from the National College of Naturopathic Medicine in Portland, Ore. Naturopathic training is often similar to the training conventional doctors receive and includes holistic training. Dr. Stengler is the author of several books and the Bottom Line newsletter on natural healing. If you venture forth, here’s advice on how to make the most of your insurance coverage and find the best prices for the highest quality alternative treatments and medicines. INSURANCE INS AND OUTS Before you do anything, be sure to read your health insurance policy thoroughly. It may spell out some of the alternative practitioners and treatments it covers, for example, 50 percent of all acupuncture and chiropractor visits. More often, says Linda Bourdosis, a patient advocate at the Block Center, coverage is more subtle. For instance, your insurer may pay for certain specific treatments — massage therapy for muscle strains for instance, or fish oil supplements to reduce inflammation from arthritis — if they are prescribed by your primary physician for a diagnosed ailment and coded correctly. Many require preauthorization from the insurer.

Keep at it, Ms. Bourdosis says. Getting the insurer to pay “doesn’t always happen the first time,” she said. “It can take two, three or four claims. You’ve got to be persistent.” Don’t be afraid to negotiate with your insurer and with your provider, particularly when treating serious illnesses. Ask to speak to the claims manager or your case manager. In Ms. Klenke’s case, the Block Center was willing to discount its rates 25 percent in return for being considered part of the network that Ms. Klenke belonged to through her husband’s group insurance plan. In her case, Ms. Bourdosis at the Block Center negotiated with her insurer, but sometimes the patient needs to be the middle man to get an insurer and health care provider to agree. Or, you might want to try to find an alternative practitioner who is part of a larger group of traditional doctors, or vice versa, Dr. Stengler says. That way, if you need lab tests or other diagnostics, your primary physician can prescribe them and they will be covered — even if alternative treatments are not. FIND AN ADVOCATE The insurance maze can be time consuming and difficult, especially in the face of illness, Ms. Klenke acknowledges. But there is help. Most large hospitals and clinics, especially those with integrative medicine programs, like Beth Israel in New York, have an advocate in the billing or coding department that can help with prequalifications, appeals and other paperwork. If you have a major illness like cancer, your insurance company may have also assigned you a separate case manager. Always make sure your advocate and insurance manager are talking to each other. BUY ONLY WHAT YOU NEED If you swear by the chiropractor or acupuncturist but your insurance doesn’t cover the treatment, you’ll need to make some spending decisions.

One important caution from Dr. Stengler is this: Avoid paying upfront for a package of visits, say, 10 to 15. “If you’re not seeing improvement in two to three visits,” he said, “then that therapy probably isn’t right for you.” Ask your practitioner if you can agree to only two or three visits, with the idea that you’ll continue the therapy if you see results. CAREFUL WITH THOSE SUPPLEMENTS A big part of alternative medicine is herbal and vitamin supplements. These are not regulated by the FDA and, as a result, there are many cases of supplements being sold with high levels of toxic substances or even prescription drug ingredients not listed on the labels. What’s more, many fraudulent brands sell high-priced supplements with minuscule dosages of the effective ingredient. “Basically you pay top dollar for, say, a glucosamine supplement thinking you’re getting 100 percent of the daily dose, when, the reality is, you’re really getting a microscopic amount,” said Dr. David Riley, a member of the faculty of the University of New Mexico medical school and editor of Alternative Therapies in Health and Medicine. Your first step is to ask your doctor for recommended brands. (But see the caveat further on.) You should also do your own research on Consumerlab.com, a comprehensive independent sitethat does thorough testing of unregulated health products of all kinds. Without federal regulations, buyer beware prevails. SHOP BIG BOX OR ONLINE Once you’ve found a brand you know you can trust, compare prices. Chances are your local health food store isn’t going to have the best prices. Both Costco and Sam’s Club have started selling supplements aggressively in recent years, and many times they have the best deals. In addition, try Web sites like Vitacost.com, says Dr. Stengler, which can offer products for 40 to 50 percent less than bricks-and-mortar retailers.

Think twice before buying directly from your practitioner, says Dr. Riley. Many doctors, he said, â&#x20AC;&#x153;make huge margins by selling supplements right in the office.â&#x20AC;?