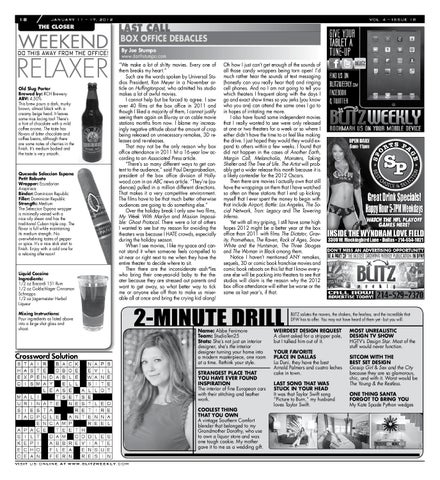 Quesada Seleccion Espana Petit Robusto Wrapper: Ecuadorian Arapiraca Binder: Dominican Republic Filler: Dominican Republic Strength: Medium The Seleccion Espana wrapper is minimally veined with a nice oily sheen and has the traditional Cuban triple cap. The flavor is full while maintaining its medium strength. No overwhelming tastes of pepper or spice. It’s a nice stick start to finish. Enjoy with a cold one for a relaxing afternoon!

“We make a lot of sh!tty movies. Every one of them breaks my heart.” Such are the words spoken by Universal Studios President, Ron Meyer in a November article on Huffingtonpost, who admitted his studio makes a lot of awful movies. I cannot help but be forced to agree. I saw over 40 films at the box office in 2011 and though I liked a majority of them, I cannot justify seeing them again on Blu-ray or on cable movie stations months from now. I blame my increasingly negative attitude about the amount of crap being released on unnecessary remakes, 3D releases and re-releases. That may not be the only reason why box office attendance in 2011 hit a 16-year low according to an Associated Press article. “There’s so many different ways to get content to the audience,” said Paul Dergarabedian, president of the box office division of Hollywood.com in an ABC news article. “They’re (audiences) pulled in a million different directions. That makes it a very competitive environment. The films have to be that much better otherwise audiences are going to do something else.” Over the holiday break I only saw two films, My Week With Marilyn and Mission Impossible: Ghost Protocol. There were a lot of others I wanted to see but my reason for avoiding the theaters was because I HATE crowds, especially during the holiday season. When I see movies, I like my space and cannot stand it when someone feels compelled to sit near or right next to me when they have the entire theater to decide where to sit. Then there are the inconsiderate assh*les who bring their one-year-old baby to the theater because they are stressed out parents and want to get away, so what better way to tick me or anyone else off than to make us miserable all at once and bring the crying kid along!

Mixing Instructions: Pour ingredients as listed above into a large shot glass and shoot.

Oh how I just can’t get enough of the sounds of all those candy wrappers being torn open! I’d much rather hear the sounds of text messaging (honestly can you really hear that) and ringing cell phones. And no I am not going to tell you which theaters I frequent along with the days I go and exact show times so you jerks (you know who you are) can attend the same ones I go to in hopes of irritating me more. I also have found some independent movies that I really wanted to see were only released at one or two theaters for a week or so where I either didn’t have the time to or feel like making the drive. I just hoped they would they would expand to others within a few weeks. I found that did not happen in the cases of Another Earth, Margin Call, Melancholia, Monsters, Taking Shelter and The Tree of Life. The Artist will probably get a wider release this month because it is a likely contender for the 2012 Oscars. Then there are movies I actually own that still have the wrappings on them that I have watched so often on these stations that I end up kicking myself that I ever spent the money to begin with that include Airport, Battle: Los Angeles, The Social Network, Tron: Legacy and The Towering Inferno. Yet with all my griping, I still have some high hopes 2012 might be a better year at the box office than 2011 with films The Dictator, Gravity, Prometheus, The Raven, Rock of Ages, Snow White and the Huntsman, The Three Stooges and The Woman in Black among them. Notice I haven’t mentioned ANY remakes, sequels, 3D or comic book franchise movies and comic book reboots on this list that I know everyone else will be packing into theaters to see that studios will claim is the reason why the 2012 box office attendance will either be worse or the same as last year’s, if that.

BLITZ salutes the movers, the shakers, the fearless, and the incredible that DFW has to offer. You may not have heard of them yet - but you will.

Name: Abbe Fenimore Team: StudioTen25 Stats: She’s not just an interior designer, she’s the interior designer turning your home into a modern masterpiece, one room at a time. Rethink your style. Strangest place that you have ever found inspiration The interior of fine European cars with their stitching and leather work. Coolest thing that you own A vintage Southern Comfort blender that belonged to my Grandmother Dorothy, who use to own a liquor store and was one tough cookie. My mother gave it to me as a wedding gift.

Visit us online at www.Blitzweekly.com

Weirdest Design Request A client asked for a stripper pole, but I talked him out of it. Your favorite place in Dallas La Duni, they have the best Arnold Palmers and cuatro leches cake in town. Last song that was stuck in your head It was that Taylor Swift song “Picture to Burn,” my husband loves Taylor Swift.

Most unrealistic design TV show HGTV’s Design Star. Most of the stuff would never function. Sitcom with the best set design Gossip Girl &amp; Sex and the City because they are so glamorous, chic, and with it. Worst would be The Young &amp; the Restless. One thing Santa forgot to bring you My Kate Spade Python wedges

Old Slug Porter Brewed by: RCH Brewery ABV: 4.50% This brew pours a dark, murky brown, almost black with a creamy beige head. It leaves some nice lacing too! There’s a hint of chocolate with a mild coffee aroma. The taste has flavors of bitter chocolate and coffee beans, although there are some notes of cherries in the finish. It’s medium bodied and the taste is very smooth. 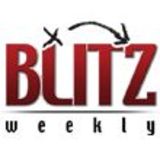