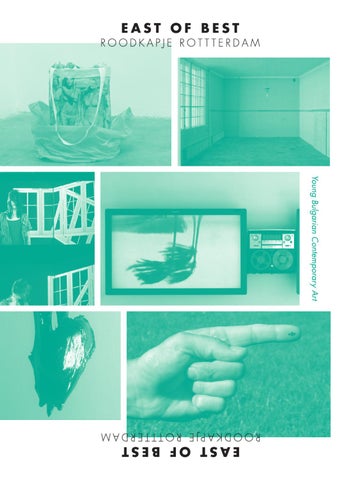 Teodora Kotseva /1984/ is art manager and founder of KOLEKTIF. She has graduated in MA Cultural Economics (Erasmus University, Rotterdam) and BA in Economics and Management (Bocconi University, Milan). With a keen interest in contemporary art and art markets, she is successfully pursuing a career in arts business. Lives in Rotterdam Nikoleta Tashkova /1980/ has studied BA in human resources at UNSS University-Sofia, Bulgaria and BA in interior design at Instituto Europeo di Design /IED/-Milan, Italy. She is co founder of KOLEKTIF. Nikoleta is passionate about contemporary art and design and all kind of artistic expressions and new developments in this field. She lives in Milan, Italy. Rossi Sotirova graduated in metal and sculpture from the Fine Arts Academy in Sofia (1985), where she has returned as a professor in metal design (19941997). From (1994-2002) she seated at the Board of the Directors of the Union of Bulgarian Artists. Rossi is the author of the altarpieces in St.Clemente in Rome, for which work Pope John Paul

II has blessed her. Rossi is founder of KOLEKTIF. Lives in Sofia, Bulgaria Solo and group exhibitions: Berlin (1989), Vienna (1991), Washington DC (1993), New York (1996,1998 and 2002), Chicago (1994), Milan (2006) and Brussels (2007). Viktoria Draganova (1980), independent curator and author, studied law in Berlin and Nottignham. She is currently writing her PhD dissertation in legal history and also attending a Master in Art History (University Frankfurt/ Main). Recently, she co-edited Law on Stage, a work on aesthetic practices regarding law in history. Lives in Frankfurt/Main and Sofia. Dessislava Dimova is an art historian and curator based in Brussels. She is currently completing her PhD thesis at the Institute for Art Studies, Bulgarian Academy of Sciences, Sofia. Recent curatorial projects include: ‘Anetta Mona Chisa and Lucia Tkacova, Material Culture: Things in our Hands’ at Christine Koenig Gallery, Vienna, 2011 and ‘Thank You for Your Understanding’ at 2. International Antakya Biennial in Turkey (2010). She is a founding

Ivan Moudov (1975), lives in Sofia. 2002 MA Fine Arts, National Academy of Arts, Sofia. Grounder (together with Steven Guermeur and Kamen Stoyanov) of the artistic project 0_gms; since 2009 they develop exhibitions in a drawer.

In 2010 he received the Gaudenz B. Ruf Award for contemporary art in the category of advanced artists.

Gaudenz B. Ruf!(1941), born in Zurich. He acquired a PhD at the Faculty of Arts (University of Zurich) and later on a degree in law. After an experience as a language teacher in Zurich and Geneva he joined the Swiss Ministry of Foreign Affairs. In 1987 he was appointed ambassador to Ethiopia, 1992 to the Baltic countries Latvia and Lithuania, 1995 to Bulgaria and Macedonia and 2000 to Serbia and Montenegro. After his retirement he created the Award for New Bulgarian Art, which has been attributed by an international jury every year since 2007.