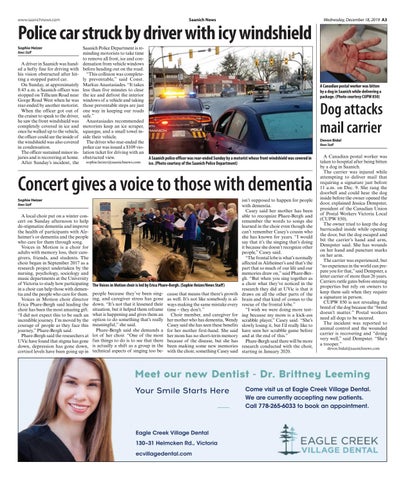 A driver in Saanich was handed a hefty fine for driving with his vision obstructed after hitting a stopped patrol car. On Sunday, at approximately 8:45 a.m. a Saanich officer was stopped on Tillicum Road near Gorge Road West when he was rear-ended by another motorist. When the officer got out of the cruiser to speak to the driver, he saw the front windshield was completely covered in ice and once he walked up to the vehicle, the officer could see the inside of the windshield was also covered in condensation. The officer sustained minor injuries and is recovering at home. After Sunday’s incident, the

Saanich Police Department is reminding motorists to take time to remove all frost, ice and condensation from vehicle windows before heading out on the road. “This collision was completely preventable,” said Const. Markus Anastasiades. “It takes less than five minutes to clear the ice and defrost the interior windows of a vehicle and taking those preventable steps are just one way in keeping our roads safe.” Anastasiades recommended motorists keep an ice scraper, squeegee, and a small towel inside their vehicle. The driver who rear-ended the police car was issued a $109 violation ticket for driving with an obstructed view. sophie.heizer@saanichnews.com

A Canadian postal worker was bitten by a dog in Saanich while delivering a package. (Photo courtesy CUPW 850)

A Saanich police officer was rear-ended Sunday by a motorist whose front windshield was covered in ice. (Photo courtesy of the Saanich Police Department)

A local choir put on a winter concert on Sunday afternoon to help de-stigmatize dementia and improve the health of participants with Alzheimer’s or dementia and the people who care for them through song. Voices in Motion is a choir for adults with memory loss, their caregivers, friends, and students. The choir began in September 2017 as a research project undertaken by the nursing, psychology, sociology and music departments at the University of Victoria to study how participating in a choir can help those with dementia and the people who care for them. Voices in Motion choir director Erica Phare-Bergh said leading the choir has been the most amazing gift. “I did not expect this to be such an incredible journey. I’m moved by the courage of people as they face this journey,” Phare-Bergh said. Phare-Bergh said the researchers at UVic have found that stigma has gone down, depression has gone down, cortisol levels have been going up in

The Voices in Motion choir is led by Erica Phare-Bergh. (Sophie Heizer/News Staff) people because they’ve been singing, and caregiver stress has gone down. “It’s not that it lessened their situation, but it helped them reframe what is happening and gives them an option to do something that’s really meaningful,” she said. Phare-Bergh said she demands a lot of her choir. “One of the most fun things to do is to see that there is actually a shift as a group in the technical aspects of singing too be-

cause that means that there’s growth as well. It’s not like somebody is always making the same mistake every time – they don’t.” Choir member, and caregiver for her mother who has dementia, Wendy Casey said she has seen these benefits for her mother first-hand. She said her mom has no short-term memory because of the disease, but she has been making some new memories with the choir, something Casey said

isn’t supposed to happen for people with dementia. Casey said her mother has been able to recognize Phare-Bergh and remember the words to songs she learned in the choir even though she can’t remember Casey’s cousin who she has known for years. “I would say that it’s the singing that’s doing it because she doesn’t recognize other people,” Casey said. “The frontal lobe is what’s normally affected in Alzheimer’s and that’s the part that so much of our life and our memories draw on,” said Phare-Bergh. “But when you sing together as a choir what they’ve noticed in the research they did at UVic is that it draws on all the other parts of the brain and that kind of comes to the rescue of the frontal lobe.” “I wish we were doing more testing because my mom is a kick-ass scrabble player,” Casey said. “She’s slowly losing it, but I’d really like to have seen her scrabble game before and at the end of this.” Phare-Bergh said there will be more research conducted with the choir, starting in January 2020.

A Canadian postal worker was taken to hospital after being bitten by a dog in Saanich. The carrier was injured while attempting to deliver mail that requiring a signature just before 11 a.m. on Dec. 9. She rang the doorbell and could hear the dog inside before the owner opened the door, explained Jessica Dempster, president of the Canadian Union of Postal Workers Victoria Local (CUPW 850). The owner tried to keep the dog barricaded inside while opening the door, but the dog escaped and bit the carrier’s hand and arm, Dempster said. She has wounds on her hand and puncture marks on her arm. The carrier was experienced, but “no experience in the world can prepare you for that,” said Dempster, a letter carrier of more than 26 years. Carriers rattle gates before entering properties but rely on owners to keep them safe when they require a signature in person. CUPW 850 is not revealing the breed of the dog because the “breed doesn’t matter.” Postal workers need all dogs to be secured. The incident was reported to animal control and the wounded carrier is recovering and “doing very well,” said Dempster. “She’s a trooper.” devon.bidal@saanichnews.com

Come visit us at Eagle Creek Village Dental. We are currently accepting new patients. Call 778-265-6033 to book an appointment.