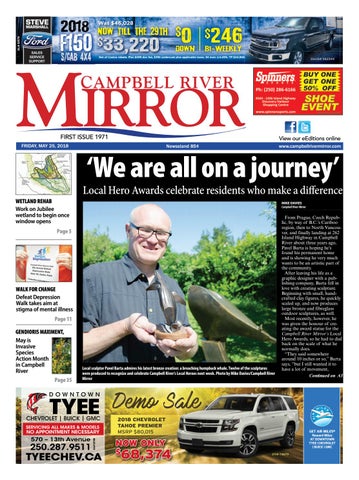 ‘We are all on a journey’

From Prague, Czech Republic, by way of B.C.’s Cariboo region, then to North Vancouver, and finally landing at 262 Island Highway in Campbell River about three years ago, Pavel Barta is hoping he’s found his permanent home and is showing he very much wants to be an artistic part of the community. After leaving his life as a graphic designer with a publishing company, Barta fell in love with creating sculpture. Beginning with small, handcrafted clay figures, he quickly scaled up, and now produces large bronze and fibreglass outdoor sculptures, as well. Most recently, however, he was given the honour of creating the award statue for the Campbell River Mirror’s Local Hero Awards, so he had to dial back on the scale of what he normally does. “They said somewhere around 10 inches or so,” Barta says, “but I still wanted it to have a lot of movement, Continued on A3