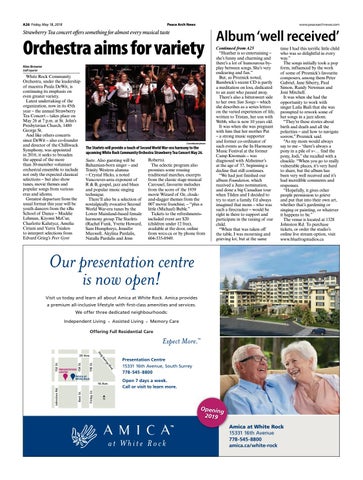 Strawberry Tea concert offers something for almost every musical taste

White Rock Community Orchestra, under the leadership of maestra Paula DeWit, is continuing its emphasis on even greater variety. Latest undertaking of the organization, now in its 45th year – the annual Strawberry Tea Concert – takes place on May 26 at 7 p.m. at St. John’s Presbyterian Church, 1480 George St. And like others concerts since DeWit – also co-founder and director of the Chilliwack Symphony, was appointed in 2016, it seeks to broaden the appeal of the more than 30-member volunteer orchestral ensemble to include not only the expected classical selections – but also show tunes, movie themes and popular songs from various eras and idioms. Greatest departure from the usual format this year will be youth dancers from the xBa School of Dance – Maddie Lehman, Kiyomi McCue, Charlotte Kalutycz, Amelia Ciriani and Yarra Tsiakos to interpret selections from Edvard Grieg’s Peer Gynt

The Starlets will provide a touch of Second World War-era harmony to the upcoming White Rock Community Orchestra Strawberry Tea Concert May 26.

Roberts). The eclectic program also promises some rousing traditional marches, excerpts from the classic stage musical Carousel, favourite melodies from the score of the 1939 movie Wizard of Oz, cloakand-dagger themes from the 007 movie franchise, – “plus a little (Michael) Buble.” Tickets to the refreshmentsincluded event are $20 (children under 12 free), available at the door, online from wrco.ca or by phone from 604-535-8949.

Album ‘well received’ Continued from A25 “Heather is so entertaining – she’s funny and charming and there’s a lot of humourous byplay between songs. She’s very endearing and fun.” But, as Proznick noted, Bambrick’s recent CD is partly a meditation on loss, dedicated to an aunt who passed away. There’s also a bittersweet side to her own Sun Songs – which she describes as a series letters on the varied experiences of life, written to Tristan, her son with Webb, who is now 10 years old. It was when she was pregnant with him that her mother Pat – a strong music supporter and former co-ordinator of such events as the In Harmony Music Festival at the former Camp Kwomais – was diagnosed with Alzheimer’s at the age of 57, beginning a decline that still continues. “We had just finished our album Foundation, which received a Juno nomination, and done a big Canadian tour when Tilden and I decided to try to start a family. I’d always imagined that mom – who was such a firecracker – would be right in there to support and participate in the raising of our child. “When that was taken off the table, I was mourning and grieving lot, but at the same

time I had this terrific little child who was so delightful in every way.” The songs initially took a pop form, influenced by the work of some of Proznick’s favourite composers, among them Peter Gabriel, Jane Siberry, Paul Simon, Randy Newman and Joni Mitchell. It was when she had the opportunity to work with singer Laila Biali that she was prompted to rework some of her songs in a jazz idiom. “They’re these stories about birth and death and all the polarities – and how to navigate sorrow,” Proznick said. “As my mom would always say to me – ‘there’s always a pony in a pile of s–… find the pony, Jodi,” she recalled with a chuckle. “When you go to really vulnerable places, it’s very hard to share, but the album has been very well received and it’s had incredible comments and responses. “Hopefully, it gives other people permission to grieve and put that into their own art, whether that’s gardening or singing or painting, or whatever it happens to be.” The venue is located at 1328 Johnston Rd. To purchase tickets, or order the studio’s online live stream option, visit www.bluefrogstudios.ca

Our presentation centre is now open! Visit us today and learn all about Amica at White Rock. Amica provides a premium all-inclusive lifestyle with ﬁrst-class amenities and services. We offer three dedicated neighbourhoods: Independent Living

Open 7 days a week. Call or visit to learn more.