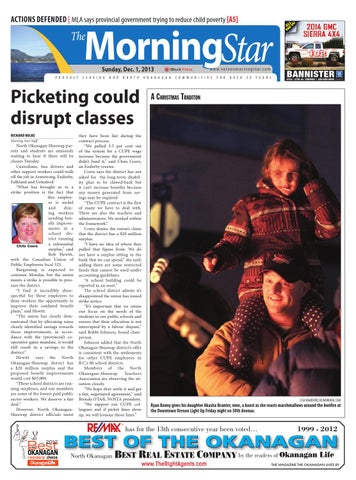 North Okanagan-Shuswap parents and students are anxiously waiting to hear if there will be classes Tuesday. Custodians, bus drivers and other support workers could walk off the job in Armstrong, Enderby, Falkland and Grindrod. “What has brought us to a strike position is the fact that this employer is nickel and diming workers needing benefit improvements in a school district running a substantial Chris Coers surplus,” said Rob Hewitt, with the Canadian Union of Public Employees local 523. Bargaining is expected to continue Monday, but the union insists a strike is possible to pressure the district. “I find it incredibly disrespectful for these employers to deny workers the opportunity to improve their outdated benefit plans,” said Hewitt. “The union has clearly demonstrated that by allocating some clearly identified savings towards those improvements, in accordance with the (provincial) cooperative gains mandate, it would still result in a savings to the district.” Hewitt says the North Okanagan-Shuswap district has a $20 million surplus and the proposed benefit improvements would cost $65,000. “These school districts are running surpluses, and our members are some of the lowest paid public sector workers. We deserve a fair deal.” However, North OkanaganShuswap district officials insist

they have been fair during the contract process. “We pulled 3.5 per cent out of the system for a CUPE wage increase because the government didn’t fund it,” said Chris Coers, an Enderby trustee. Coers says the district has not asked for the long-term disability plan to be clawed-back but it can’t increase benefits because any money generated from savings may be required. “The CUPE contract is the first of many we have to deal with. There are also the teachers and administrators. We worked within the framework.” Coers denies the union’s claim that the district has a $20 million surplus. “I have no idea of where they pulled that figure from. We do not have a surplus sitting in the bank that we can spend,” she said, adding there are some restricted funds that cannot be used under accounting guidelines. “A school building could be reported as an asset.” The school district admits it’s disappointed the union has issued strike notice. “It’s important that we retain our focus on the needs of the students in our public schools and ensure that their education is not interrupted by a labour dispute,” said Bobbi Johnson, board chairperson. Johnson added that the North Okanagan-Shuswap district’s offer is consistent with the settlements for other CUPE employees in B.C.’s 60 school districts. Members of the North Okanagan-Shuswap Teachers Association are observing the situation closely. “We hope they settle it and get a fair, negotiated agreement,” said Brenda O’Dell, NOSTA president. “We support our CUPE colleagues and if picket lines show up, we will honour those lines.”

Ryan Kenny gives his daughter Akasha Branter, nine, a boost as she roasts marshmallows around the bonfire at the Downtown Vernon Light Up Friday night on 30th Avenue.

has for the 13th consecutive year been voted…

BEST OF THE OKANAGAN North Okanagan

THE MAGAZINE THE OKANAGAN LIVES BY