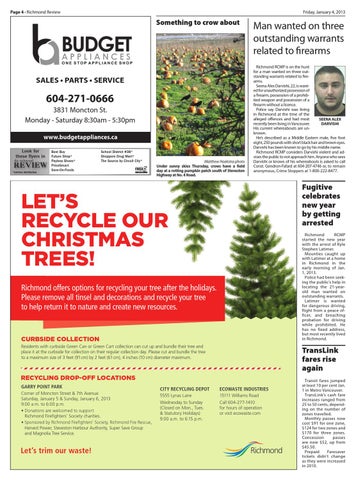 Something to crow about

Matthew Hoekstra photo Under sunny skies Thursday, crows have a field day at a rotting pumpkin patch south of Steveston Highway at No. 4 Road.

Man wanted on three outstanding warrants related to firearms Richmond RCMP is on the hunt for a man wanted on three outstanding warrants related to firearms. Seena Alex Darvishi, 22, is wanted for unauthorized possession of a firearm, possession of a prohibited weapon and possession of a firearm without a licence. Police say Darvishi was living in Richmond at the time of the alleged offences and had most SEENA ALEX DARVISHI recently been living in Vancouver. His current whereabouts are unknown. He’s described as a Middle Eastern male, five foot eight, 250 pounds with short black hair and brown eyes. Darvishi has been known to go by his middle name. Richmond RCMP considers Darvishi violent and advises the public to not approach him. Anyone who sees Darvishi or knows of his whereabouts is asked to call Const. Gendron-Fafard at 604-207-4746 or, to remain anonymous, Crime Stoppers at 1-800-222-8477.

Richmond RCMP started the new year with the arrest of Kyle Stephen Latimer. Mounties caught up with Latimer at a home in Richmond in the early morning of Jan. 1, 2013. Police had been seeking the public’s help in locating the 21-yearold man wanted on outstanding warrants. Latimer is wanted for dangerous driving, flight from a peace officer, and breaching probation for driving while prohibited. He has no fixed address, but most recently lived in Richmond.

Richmond offers options for recycling your tree after the holidays. Please remove all tinsel and decorations and recycle your tree to help return it to nature and create new resources.

curbside coLLection Residents with curbside Green Can or Green Cart collection can cut up and bundle their tree and place it at the curbside for collection on their regular collection day. Please cut and bundle the tree to a maximum size of 3 feet (91 cm) by 2 feet (61 cm), 4 inches (10 cm) diameter maximum.

Transit fares jumped at least 10 per cent Jan. 1 in Metro Vancouver. TransLink's cash fare increases ranged from 25 to 50 cents, depending on the number of zones travelled. Monthly passes now cost $91 for one zone, $124 for two zones and $170 for three zones. Concession passes are now $52, up from $45.50. Prepaid Faresaver tickets didn't change as they were increased in 2010.

January 04, 2013 edition of the Richmond Review

January 04, 2013 edition of the Richmond Review