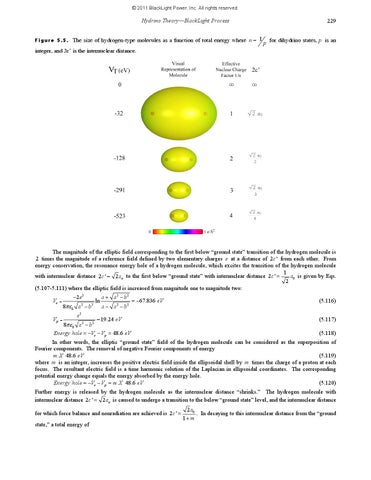 Hydrino Theory—BlackLight Process Figu r e 5 .5. The size of hydrogen-type molecules as a function of total energy where n  1

for dihydrino states, p is an

integer, and 2c’ is the internuclear distance.

The magnitude of the elliptic field corresponding to the first below “ground state” transition of the hydrogen molecule is 2 times the magnitude of a reference field defined by two elementary charges e at a distance of 2c ' from each other. From energy conservation, the resonance energy hole of a hydrogen molecule, which excites the transition of the hydrogen molecule 1 with internuclear distance 2c '  2ao to the first below “ground state” with internuclear distance 2c '  a0 is given by Eqs. 2 (5.107-5.111) where the elliptic field is increased from magnitude one to magnitude two: Ve

(5.117)  19.24 eV 8 0 a 2  b 2 (5.118) Energy hole  Ve  V p  48.6 eV In other words, the elliptic “ground state” field of the hydrogen molecule can be considered as the superposition of Fourier components. The removal of negative Fourier components of energy m X 48.6 eV (5.119) where m is an integer, increases the positive electric field inside the ellipsoidal shell by m times the charge of a proton at each focus. The resultant electric field is a time harmonic solution of the Laplacian in ellipsoidal coordinates. The corresponding potential energy change equals the energy absorbed by the energy hole. (5.120) Energy hole  Ve  V p  m X 48.6 eV Vp

2a0 . In decaying to this internuclear distance from the “ground 1 m 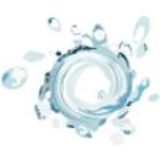 Classical Physics (CP) model of the structure of the electron and the photon used to solve atoms and their states and the subsequent closed-...

Classical Physics (CP) model of the structure of the electron and the photon used to solve atoms and their states and the subsequent closed-...