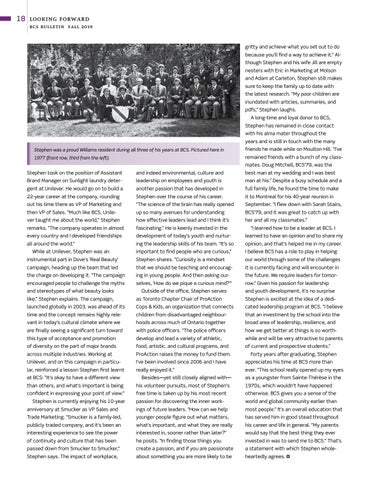 gritty and achieve what you set out to do because you’ll find a way to achieve it.” Although Stephen and his wife Jill are empty nesters with Eric in Marketing at Molson and Adam at Carleton, Stephen still makes sure to keep the family up to date with the latest research. “My poor children are inundated with articles, summaries, and pdfs,” Stephen laughs. A long-time and loyal donor to BCS, Stephen has remained in close contact with his alma mater throughout the years and is still in touch with the many Stephen was a proud Williams resident during all three of his years at BCS. Pictured here in

friends he made while on Moulton Hill. “I’ve

remained friends with a bunch of my classmates. Doug Mitchell, BCS’79, was the

Stephen took on the position of Assistant

and indeed environmental, culture and

best man at my wedding and I was best

leadership on employees and youth is

man at his.” Despite a busy schedule and a

gent at Unilever. He would go on to build a

another passion that has developed in

full family life, he found the time to make

22-year career at the company, rounding

Stephen over the course of his career.

it to Montreal for his 40-year reunion in

out his time there as VP of Marketing and

“The science of the brain has really opened

September. “I flew down with Sarah Stairs,

up so many avenues for understanding

BCS’79, and it was great to catch up with

ver taught me about the world,” Stephen

how effective leaders lead and I think it’s

her and all my classmates.”

remarks. “The company operates in almost

fascinating.” He is keenly invested in the

every country and I developed friendships

development of today’s youth and nurtur-

learned to have an opinion and to share my

all around the world.”

ing the leadership skills of his team. “It’s so

opinion, and that’s helped me in my career.

important to find people who are curious,”

I believe BCS has a role to play in helping

Stephen shares. “Curiosity is a mindset

our world through some of the challenges

campaign, heading up the team that led

that we should be teaching and encourag-

it is currently facing and will encounter in

the charge on developing it. “The campaign

ing in young people. And then asking our-

the future. We require leaders for tomor-

encouraged people to challenge the myths

selves, ‘How do we pique a curious mind?’”

row.” Given his passion for leadership

While at Unilever, Stephen was an

and stereotypes of what beauty looks

Outside of the office, Stephen serves

“I learned how to be a leader at BCS. I

and youth development, it’s no surprise

as Toronto Chapter Chair of ProAction

Stephen is excited at the idea of a dedi-

launched globally in 2003, was ahead of its

that an investment by the school into the

vant in today’s cultural climate where we

hoods across much of Ontario together

broad area of leadership, resilience, and

are finally seeing a significant turn toward

how we get better at things is so worth-

this type of acceptance and promotion

develop and lead a variety of athletic,

while and will be very attractive to parents

of diversity on the part of major brands

food, artistic, and cultural programs, and

of current and prospective students.”

across multiple industries. Working at

ProAction raises the money to fund them.

Unilever, and on this campaign in particu-

I’ve been involved since 2006 and I have

appreciates his time at BCS more than

ever. “This school really opened up my eyes

at BCS: “It’s okay to have a different view

as a youngster from Sainte-Thérèse in the

than others, and what’s important is being

his volunteer pursuits, most of Stephen’s

1970s, which wouldn’t have happened

confident in expressing your point of view.”

free time is taken up by his most recent

otherwise. BCS gives you a sense of the

passion for discovering the inner work-

world and global community earlier than

anniversary at Smucker as VP Sales and

Stephen is currently enjoying his 10-year

ings of future leaders. “How can we help

most people.” It’s an overall education that

Trade Marketing. “Smucker is a family-led,

younger people figure out what matters,

has served him in good stead throughout

publicly traded company, and it’s been an

what’s important, and what they are really

his career and life in general. “My parents

interesting experience to see the power

would say that the best thing they ever

of continuity and culture that has been

he posits. “In finding those things you

invested in was to send me to BCS.” That’s

passed down from Smucker to Smucker,”

create a passion, and if you are passionate

a statement with which Stephen whole-

Stephen says. The impact of workplace,

about something you are more likely to be

The fall 2019 issue of our school magazine has arrived! 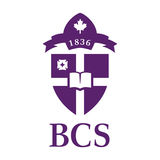