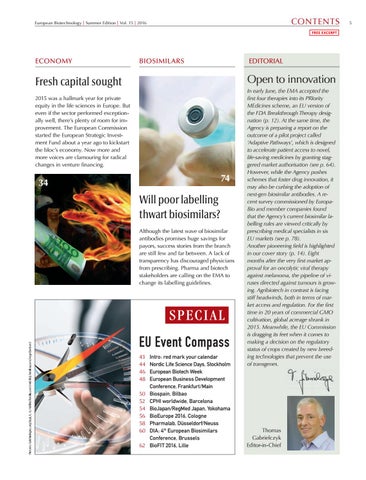 Fresh capital sought 2015 was a hallmark year for private equity in the life sciences in Europe. But even if the sector performed exceptionally well, there’s plenty of room for improvement. The European Commission started the European Strategic Investment Fund about a year ago to kickstart the bloc’s economy. Now more and more voices are clamouring for radical changes in venture financing.

Will poor labelling thwart biosimilars? Although the latest wave of biosimilar antibodies promises huge savings for payors, success stories from the branch are still few and far between. A lack of transparency has discouraged physicians from prescribing. Pharma and biotech stakeholders are calling on the EMA to change its labelling guidelines.

In early June, the EMA accepted the first four therapies into its PRIority MEdicines scheme, an EU version of the FDA Breakthrough Therapy designation (p. 12). At the same time, the Agency is preparing a report on the outcome of a pilot project called ‘Adaptive Pathways’, which is designed to accelerate patient access to novel, life-saving medicines by granting staggered market authorisation (see p. 64). However, while the Agency pushes schemes that foster drug innovation, it may also be curbing the adoption of next-gen biosimilar antibodies. A recent survey commissioned by EuropaBio and member companies found that the Agency’s current biosimilar labelling rules are viewed critically by prescribing medical specialists in six EU markets (see p. 78). Another pioneering field is highlighted in our cover story (p. 14). Eight months after the very first market approval for an oncolytic viral therapy against melanoma, the pipeline of viruses directed against tumours is growing. Agribiotech in contrast is facing stiff headwinds, both in terms of market access and regulation. For the first time in 20 years of commercial GMO cultivation, global acreage shrank in 2015. Meanwhile, the EU Commission is dragging its feet when it comes to making a decision on the regulatory status of crops created by new breeding technologies that prevent the use of transgenes. 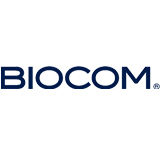