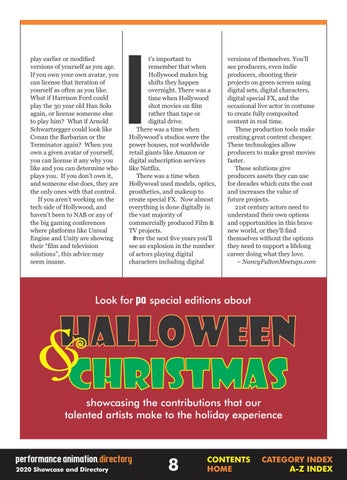 play earlier or modiﬁed versions of yourself as you age. If you own your own avatar, you can license that iteration of yourself as often as you like. What if Harrison Ford could play the 30 year old Han Solo again, or license someone else to play him? What if Arnold Schwartzegger could look like Conan the Barbarian or the Terminator again? When you own a given avatar of yourself, you can license it any why you like and you can determine who plays you. If you don’t own it, and someone else does, they are the only ones with that control. If you aren’t working on the tech side of Hollywood, and haven’t been to NAB or any of the big gaming conferences where platforms like Unreal Engine and Unity are showing their “ﬁlm and television solutions”, this advice may seem insane.

versions of themselves. You’ll see producers, even indie producers, shooting their projects on green screen using digital sets, digital characters, digital special FX, and the occasional live actor in costume to create fully composited content in real time. These production tools make creating great content cheaper. These technologies allow producers to make great movies faster. These solutions give producers assets they can use for decades which cuts the cost and increases the value of future projects. 21st century actors need to understand their own options and opportunities in this brave new world, or they’ll ﬁnd themselves without the options they need to support a lifelong career doing what they love. – NancyFultonMeetups.com 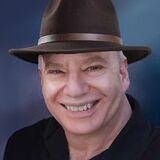