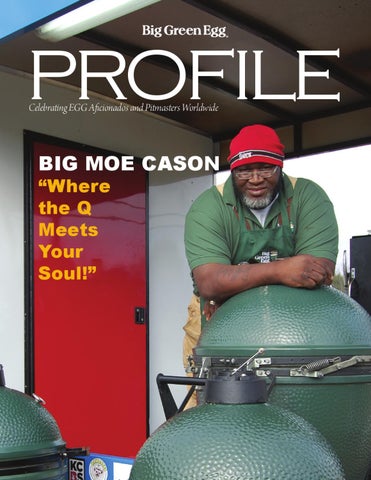 BIG MOE CASON “Where the Q Meets Your Soul!”

“I am passionate about my Q because what initially was a hobby very quickly turned into a way of life. ••• I live it. I breathe it. I AM BBQ”

THE REAL DEAL Big Moe Cason was born, raised, and corn fed out of Des Moines, Iowa. It wasn’t an easy life, but a lot of love, optimism, and some killer brisket pulled the family through. “I have a very large family,” reminisces Moe. “My mother had only my sister and me, but my grandmother had seventeen children. She was an outstanding cook; everything she made was from scratch … pies, cakes. She was an old school southern woman and she was really poor, but she made magic out of little or nothing. She taught my mother how to cook, and my mother taught me. We always cooked around the house, and we did a lot of grilling. About the time I turned ten my mom handed me the grilling duties at camping and picnics, and that’s how I really got into it. I just loved it.”

Motivated to make a better life for himself, Cason

USS MISSOURI Moe Cason served on the USS Missouri during Desert Shield and Desert Storm. “The Navy was the best decision for me because it taught me the life lessons I needed to really grow up. It made me into a man,” says Moe. After the completion of Operation Desert Storm, the USS Missouri paused briefly in Australia and Hawaii en route home to Long Beach Naval Station. There her oﬃcers and crew received a hero’s welcome by thousands of friends and family. But the USS Missouri had one final mission to complete. On March 31, 1992, the Missouri was decommissioned for the final time. Though her active naval service is complete, her legacy is not forgotten. On January 29, 1999, after years of dedicated community effort, the Battleship Missouri returned to service as centerpiece of the Battleship Missouri Memorial in Pearl Harbor.

joined the Navy and served on the USS Missouri during Desert Shield and Desert Storm. “The Navy was the best decision for me because it taught me the life lessons I needed to really grow up. It made me into a man,” says Moe. After his stint in the Navy, Cason met his soul mate, Angelena. “Together, we have four awesome daughters and a cat − I am the only dude in the house. Even the dang cat is a female. I live in a world of Barbie dolls and glitter; I love my family dearly, but to ease my brain from the estrogen overload, I needed a hobby. I started out collecting old muscle cars; I even did some diesel truck pulling at county fairs,” he laughs. “But then the barbecue bug got me.” “A friend of mine had a Big Green Egg. He loved it and I heard great things about it. I actually did some horse trading for it, and it’s been on my back deck ever since … it’s my old dependable. Throughout the winter I cook on it every day − even if I have to shovel snow to get out to it! She’s just an awesome cooker.” When Moe brought his first EGG home, “I loaded it with charcoal; I wanted to see how long I could maintain a low and slow temperature. I’d peek out the window and look, and she was rock steady. It was incredible. It totally impressed me.”

“When I started watching cooking competition shows I was inspired to take it to another level. I said, ‘I can do this!’ I entered my first barbecue contest in 2006 and have been addicted ever since - my wife says ‘obsessed’ is more like it.

Top: Meats are judged by Certified Barbeque Judges who have undergone training that teaches the â&amp;#x20AC;&amp;#x153;standardsâ&amp;#x20AC;? of competition BBQ. Each category is judged based upon appearance, taste and tenderness. Above: Each team is supplied with white Styrofoam boxes about 9 inches square which they need to fill with at least 6 identifiable pieces of meat.

Is it the trophies, ribbons and accolades that come with winning major barbecue and grilling competitions? Is it the satisfaction of perfecting a recipe for a mouthwatering rub or seasoning? Or is it just the personal satisfaction enjoyed when sharing another winning meal with friends and family? To each of these, we say YES!! Each year, thousands of Big Green Egg grilling enthusiasts from countries across the globe compete in hundreds of sanctioned barbecue contests. From Northern Europe to Southern Alabama and Canada to South Africa, these grilling aficionados carefully mix their homemade recipes for rubs, sauces and marinades and painstakingly trim each cut of meat to perfection, all vying for the Grand Prize. The Big Green Egg is right in the middle of all of the action!

CHAMPION? • • • Here are some insights into the “behind the scenes” action at a sanctioned barbecue competition, as told by Mike Peters, KCBS Certified Barbeque Judge and co-host of the KCBS American BBQ Tour. Most people, when they cook on an EGG think their food is the best out there, as do their friends and family who get to partake in the great fixings. Some cooks take that one step further to compete against other teams in Competitive BBQ contests. The largest sanctioning body of competition BBQ is the Kansas City Barbeque Society (KCBS), which provides the rules, regulations and certified judges to give a fair playing field for all involved. With a membership of almost 16,000 barbeque cooks and enthusiasts, KCBS is the world’s largest barbeque society, sanctioning more than 400 festivals and events this year. Thousands will compete for millions of prize dollars! Competition teams smoke chicken, pork shoulder or butt, pork ribs and beef brisket to turn in to a table of judges. Teams have a 10 minute window, thirty minutes apart to turn in each meat category. The meats are judged by Certified Barbeque Judges (or CBJs) who have undergone training that teaches the “standards” of competition BBQ. Each category is judged based upon appearance, taste and tenderness … each being weighted differently with taste and tenderness scores being more important. Taste is the only score that is dictated by personal preference while appearance and tenderness follow more of the judging standards. Typically at a competition, chicken turn-in starts at 11:30am with a 5 minute window before and after for the team to turn in their product. Next at 12:00 is the pork entry, 12:30 for ribs and 1:00 for brisket, each with the same 10 minute window. At a contest, around 11:15 or so, you will see team sites bustling with activity making sure everything is prepared and ready for that first turn in.

Each team is supplied with white Styrofoam boxes about 9 inches square which they need to fill with at least 6 identifiable pieces of meat. Each box is numbered and when the box is turned into the judges’ area, it is re-numbered before it is placed before the six judges. This is called double-blind judging to help keep everything fair; the food is judged on its merits, not because of the team or cook. Most first time visitors to a BBQ contest come expecting to eat some BBQ but, due to health department rules, teams cannot serve the public. The leftovers typically get set out on a “grazing” table where volunteers can try some of the championship food. To try some Grand Champion food for yourself, the best bet is to join KCBS, take the judging class and register to judge a contest. After tasting competition BBQ, a BBQ joint never tastes quite as good again. Turn in times for the judges is very strict. Entries are judged only at the time established by the contest organizers. A late turn-in receives a one (1) in all criteria. Garnish is optional. If used, it is limited to chopped, sliced, shredded or whole leaves of fresh green lettuce, curly parsley, flat leaf parsley and/or cilantro. Kale, endive, red tipped lettuce, lettuce cores and other vegetation are prohibited. Improper garnish shall receive a score of one (1) on Appearance.

To try some Grand Champion food for yourself, the best bet is to join KCBS, take the judging class and register to judge a contest. After tasting competition BBQ, a BBQ joint never tastes quite as good again.

The Great American BBQ Tour features the championship barbeque team of Mike and Christine Peters sharing grilling tips and tasty food samples with event attendees. The fan-favorite Peters take techniques that the professionals use on the KCBS competition barbeque circuit and show fans how to apply them to their own backyard grill. To learn more about The Great American BBQ Tour and tour stops near you, click on BigGreenEgg.com

COMPETITION TIPS: 1. While most people like their ribs “falling off the bone”, in the CBJ world, that means that the rib is overcooked which would result in a lower score. 2. Teams can use garnish like lettuce or parsley in their turn-in boxes, but some garnish is illegal, such as kale, endive or red-tipped lettuce. 3. A typical judge can consume up to 2½ pounds of food in a competition. We normally tell judges to taste the OK stuff and eat the good stuff! 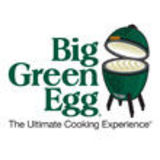