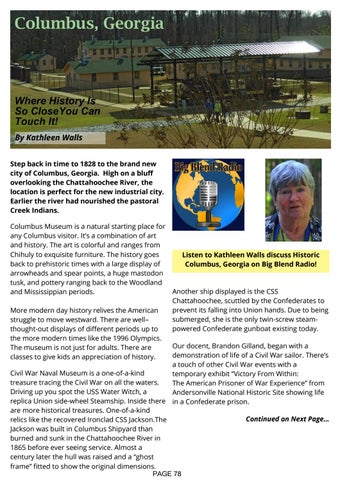 By Kathleen Walls Step back in time to 1828 to the brand new city of Columbus, Georgia. High on a bluff overlooking the Chattahoochee River, the location is perfect for the new industrial city. Earlier the river had nourished the pastoral Creek Indians. Columbus Museum is a natural starting place for any Columbus visitor. It’s a combination of art and history. The art is colorful and ranges from Chihuly to exquisite furniture. The history goes back to prehistoric times with a large display of arrowheads and spear points, a huge mastodon tusk, and pottery ranging back to the Woodland and Mississippian periods. More modern day history relives the American struggle to move westward. There are well– thought-out displays of different periods up to the more modern times like the 1996 Olympics. The museum is not just for adults. There are classes to give kids an appreciation of history.

Another ship displayed is the CSS Chattahoochee, scuttled by the Confederates to prevent its falling into Union hands. Due to being submerged, she is the only twin-screw steampowered Confederate gunboat existing today.

Our docent, Brandon Gilland, began with a demonstration of life of a Civil War sailor. There’s a touch of other Civil War events with a Civil War Naval Museum is a one-of-a-kind temporary exhibit “Victory From Within: treasure tracing the Civil War on all the waters. The American Prisoner of War Experience” from Driving up you spot the USS Water Witch, a Andersonville National Historic Site showing life replica Union side-wheel Steamship. Inside there in a Confederate prison. are more historical treasures. One-of-a-kind Continued on Next Page… relics like the recovered Ironclad CSS Jackson.The Jackson was built in Columbus Shipyard than burned and sunk in the Chattahoochee River in 1865 before ever seeing service. Almost a century later the hull was raised and a “ghost frame” fitted to show the original dimensions. PAGE 78

From the Far West to the Desert Southwest, the Midwest to the Southeast, and even England, it’s all about National Park Travel Destinations including One Hour Walks and Trails, Birds and Wildlife, History and Culture, Art and Film, Conservation and Volunteering, and more! 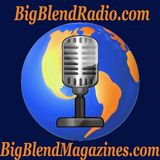