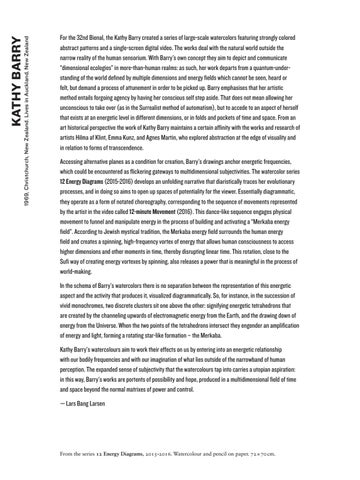 For the 32nd Bienal, the Kathy Barry created a series of large-scale watercolors featuring strongly colored abstract patterns and a single-screen digital video. The works deal with the natural world outside the narrow reality of the human sensorium. With Barry's own concept they aim to depict and communicate “dimensional ecologies” in more-than-human realms: as such, her work departs from a quantum-understanding of the world defined by multiple dimensions and energy fields which cannot be seen, heard or felt, but demand a process of attunement in order to be picked up. Barry emphasises that her artistic method entails forgoing agency by having her conscious self step aside. That does not mean allowing her unconscious to take over (as in the Surrealist method of automatism), but to accede to an aspect of herself that exists at an energetic level in different dimensions, or in folds and pockets of time and space. From an art historical perspective the work of Kathy Barry maintains a certain affinity with the works and research of artists Hilma af Klint, Emma Kunz, and Agnes Martin, who explored abstraction at the edge of visuality and in relation to forms of transcendence. Accessing alternative planes as a condition for creation, Barry's drawings anchor energetic frequencies, which could be encountered as flickering gateways to multidimensional subjectivities. The watercolor series 12 Energy Diagrams (2015-2016) develops an unfolding narrative that diaristically traces her evolutionary processes, and in doing so aims to open up spaces of potentiality for the viewer. Essentially diagrammatic, they operate as a form of notated choreography, corresponding to the sequence of movements represented by the artist in the video called 12-minute Movement (2016). This dance-like sequence engages physical movement to funnel and manipulate energy in the process of building and activating a “Merkaba energy field”. According to Jewish mystical tradition, the Merkaba energy field surrounds the human energy field and creates a spinning, high-frequency vortex of energy that allows human consciousness to access higher dimensions and other moments in time, thereby disrupting linear time. This rotation, close to the Sufi way of creating energy vortexes by spinning, also releases a power that is meaningful in the process of world-making. In the schema of Barry's watercolors there is no separation between the representation of this energetic aspect and the activity that produces it, visualized diagrammatically. So, for instance, in the succession of vivid monochromes, two discrete clusters sit one above the other: signifying energetic tetrahedrons that are created by the channeling upwards of electromagnetic energy from the Earth, and the drawing down of energy from the Universe. When the two points of the tetrahedrons intersect they engender an amplification of energy and light, forming a rotating star-like formation – the Merkaba. Kathy Barry's watercolours aim to work their effects on us by entering into an energetic relationship with our bodily frequencies and with our imagination of what lies outside of the narrowband of human perception. The expanded sense of subjectivity that the watercolours tap into carries a utopian aspiration: in this way, Barry's works are portents of possibility and hope, produced in a multidimensional field of time and space beyond the normal matrixes of power and control. ——Lars Bang Larsen 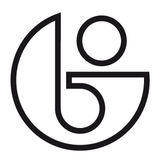