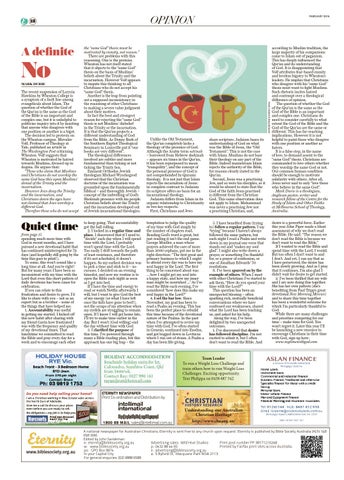 Quiet time from page 15 spending much more time with God in recent months, and I have pursued a new devotional habit that has continued uninterrupted for 79 days (and hopefully still going by the time this goes to print!). To some, this won’t sound like a long time at all. And you’re right! But for many years I have been so inconsistent with my time with the Lord that even this short pattern of daily devotions has been cause for celebration. If you can relate to this frustration and desire to grow, I’d like to share with you – not as an expert but as a brother – some of the things that have helped me. 1. Accountability was useful in getting me started. I kicked off this new habit after sharing with my friend Gavin how frustrated I was with the frequency and quality of my devotional times. That lunchtime we committed to read the Bible and pray every day for a week and to encourage each other

the “same God” thesis must be motivated by enmity, not reason.” There are problems with this reasoning. One is the premise. Wheaton has not itself stated that it objects to the “same God” thesis on the basis of Muslims’ beliefs about the Trinity and the incarnation. However Volf appears to impute this thinking to all Christians who do not accept his “same God” thesis. Another is the leap from pointing out a supposed inconsistency in the reasoning of other Christians to making a severe value judgment about their motives. In fact the best and strongest reason for rejecting the “same God” thesis is not Muslims’ disbelief in the Trinity or the incarnation. It is that the Qur’an projects a different understanding of God from the Bible. As Denny Burk of the Southern Baptist Theological Seminary in Louisville put it “our books are very different”. The theological differences involved are subtler and more fundamental than ticking or not ticking the Trinity box. Eminent Orthodox Jewish theologian Michael Wyschogrod observed that the Christian doctrine of the incarnation was grounded upon the fundamentally biblical – and thoroughly Jewish – concept of the indwelling of God’s Shekinah presence with his people. Christian beliefs about the Trinity and the incarnation developed out of Jewish incarnational theologies.

Unlike the Old Testament, the Qur’an completely lacks a theology of the presence of God. Although the Arabic term sakīnah – borrowed from Hebrew shekinah – appears six times in the Qur’an, it has been repurposed to mean “tranquility”, and the concept of the personal presence of God is not comprehended by Quranic theology. It is not just that Islam rejects the incarnation of Jesus: in complete contrast to Judaism its scripture offers no basis for an incarnational theology. Judaism differs from Islam in its organic relationship to Christianity in two key respects. First, Christians and Jews

share scripture. Judaism bases its understanding of God on what was the Bible of Jesus, the “Old Testament”. This is not the case with Islam. Muslims do not base their theology on any part of the Bible. Indeed mainstream Islam rejects the authority of the Bible, for reasons clearly stated in the Qur’an. Second, Jesus was a practising Jew, and so were his disciples, so it would be absurd to state that the God of the faith Jesus practised is different from the Christian God. This same observation does not apply to Islam. Muhammad was never a practising Jew nor a practising Christian, and,

according to Muslim tradition, the large majority of his companions came to Islam out of paganism. This has deeply influenced the Qur’an and its understanding of God. It is disappointing that Volf attributes fear-based enmity and loveless bigotry to Wheaton’s leaders. He implies that Christians who disagree with his “same God” thesis must want to fight Muslims. Such rhetoric incites hatred and contempt over a theological difference of opinion. The question of whether the God of the Qur’an is the same as the God of the Bible is an important and complex one. Christians do need to consider carefully to what extent the God of the Bible and the God of the Qur’an are the same or different. This has far-reaching implications. However it is not helpful to paint those who disagree with one position or another as haters. It is a false step, in the name of love, to demand assent to the “same God” thesis. Christians are commanded to love others whether they worship the same God or not. Our common human condition should be enough to motivate solidarity with others. After all, Jesus never said to only “love those who believe in the same God”. Mark Durie is a theologian, Anglican pastor, writer and research fellow of the Centre for the Study of Islam and Other Faiths at Melbourne School of Theology, Australia.

to keep going. That accountability got the ball rolling. 2. I locked in a regular time and place. I discovered that if I need to “decide” each day when I will spend time with the Lord, I probably won’t spend time with the Lord. Too easily I drift towards the path of least resistance, and therefore if it’s not scheduled, it doesn’t happen. So my earliest decision was to pick a time and stick to it – no excuses. I decided on an evening timeslot, and now my routine is to open the Bible each night as soon as I get into bed. If I have the time and energy to read or watch Netflix afterwards I will, but I want to give God the best of my energy (or what I have left once the kids have gone to bed!), not the scraps of my attention when my eyelids are struggling to remain open. If I know I will get home late, I’ll try to make time earlier in the day. But I won’t (God willing) end the day without time with God. 3. I clarified the purpose of this time. I’ve powered through many a Bible reading plan, but this approach has one big trap – the

temptation to judge the quality of my time with God simply by the number of chapters read. Reading God’s word is great, but just reading it isn’t the end game. George Mueller, a man whose prayers achieved the care of more than 3000 orphans, put me in the right direction: “The first great and primary business to which I ought to attend every day was to have my soul happy in the Lord. The first thing to be concerned about was ... how I might get my soul into a happy state, and how my inner man might be nourished ...” As I’ve read the Bible each evening, I’ve considered “how does this make my soul happy in the Lord?” 4. I set the bar low. Since November, my goal has been to read a Psalm an evening. This has been the perfect place to rebuild this time because of the devotional nature of the Psalms. In the past when I’ve attempted to revive my time with God, I’ve often started in Genesis, continued into Exodus, and got bogged down in Leviticus where I run out of steam. A Psalm a day has been life-giving.

5. I have benefited from (trying to) follow a regular pattern. I say “trying” because I haven’t always followed the same pattern, but each night I read a Psalm and write down in my journal one verse that stands out and “makes my soul glad”. I might also write down a prayer, or something I’m thankful for, or a prayer of confession, or one of Jonathan Edwards’ 70 resolutions. 6. I’ve been spurred on by the example of others. When I meet with other Christians I’ve started to ask them, “How do you spend your time with the Lord?” This question has been an unexpected blessing – often sparking rich, mutually beneficial conversations where we have confessed our weaknesses, shared what the Lord has been teaching us, and asked for his help. Along the way, I’ve been delighted by two unexpected outcomes. 1. I’ve discovered that desire has followed discipline. I’m not excited to admit it, but I often don’t want to read the Bible. And

desire is a powerful force. Earlier this year John Piper made a blunt assessment of why we don’t read the Bible. He said: “The reason we don’t read the Bible is because we don’t want to read the Bible.” If I wanted to read the Bible and spend time with the Lord, I would. But too often I don’t want to and I don’t. And yet, I can say that as I have persevered, the desire has been slowly growing. And as I pray that it continues, I’m also glad I didn’t wait for desire to get started. 2. I’ve been thrilled that my wife and I are now doing this together. She has her own pattern (she’s benefiting from Paul Tripp’s great devotional New Morning Mercies) and to share this time together has been a wonderful outcome for which I’m particularly thankful to God. While there are many challenges and priorities competing for our time – make time for God. You won’t regret it. Later this year I’ll be launching a new resource to encourage Christians in their time with God, sign up here: www.mytimewithgod.com

The recent suspension of Larycia Hawkins by Wheaton College is a symptom of a fault line among evangelicals about Islam. The question of whether the God of the Qur’an is the same as the God of the Bible is an important and complex one, but it is unhelpful to politicise inquiry into it by insisting that anyone who disagrees with one position or another is a bigot. The decision led to protests on the Wheaton campus. Miroslav Volf, Professor of Theology at Yale, published an article in The Washington Post criticising Wheaton. Volf suggests that Wheaton is motivated by hatred towards Muslims, dressed up in dogma. He argues that: “Those who claim that Muslims and Christians do not worship the same God base this upon Muslims’ denial of the Trinity and the incarnation. However Jews deny the Trinity and the incarnation, and Christians down the ages have not claimed that Jews worship a different God. Therefore those who do not accept

How's your quiet time with God? Beyond Wimbledon: Margaret Court serves others China's need for Sunday schools + Do we worship the same God as Muslims? 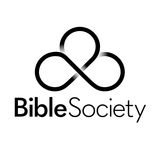