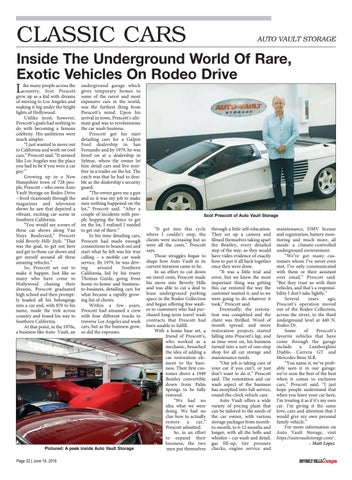 Inside The Underground World Of Rare, Exotic Vehicles On Rodeo Drive

ike many people across the country, Scot Prescott grew up as a kid with dreams of moving to Los Angeles and making it big under the bright lights of Hollywood. Unlike most, however, Prescott’s goals had nothing to do with becoming a famous celebrity. His ambitions were much simpler. “I just wanted to move out to California and work on cool cars,” Prescott said. “It seemed like Los Angeles was the place you had to be if you were a car guy.” Growing up in a New Hampshire town of 728 people, Prescott – who owns Auto Vault Storage on Rodeo Drive – lived vicariously through the magazines and television shows he saw that depicted a vibrant, exciting car scene in Southern California. “You would see scenes of these car shows along Van Nuys Boulevard,” Prescott told Beverly Hills Style. “That was the goal, to get out here and get to those car shows and get myself around all these amazing vehicles.” So, Prescott set out to make it happen. Just like so many who have come to Hollywood chasing their dreams, Prescott graduated high school and then promptly loaded all his belongings into a car and, with $70 to his name, made the trek across country and found his way to Southern California. At that point, in the 1970s, a business like Auto Vault, an

underground garage which gives temporary homes to some of the rarest and most expensive cars in the world, was the furthest thing from Prescott’s mind. Upon his arrival in town, Prescott’s ultimate goal was to revolutionize the car wash business. Prescott got his start detailing cars for a Galpin Ford dealership in San Fernando and by 1979, he was hired on at a dealership in Sylmar, where the owner let him detail cars and live rentfree in a trailer on the lot. The catch was that he had to double as the dealership’s security guard. “The owner gave me a gun and so it was my job to make sure nothing happened on the lot,” Prescott said. “After a couple of incidents with people hopping the fence to get on the lot, I realized I needed to get out of there.” In his time detailing cars, Prescott had made enough connections to branch out and start what he felt was his true calling – a mobile car wash service. By 1979, he was driving around Southern California, led by his trusty Thomas Guide, going from home-to-home and businessto-business, detailing cars for what became a rapidly growing list of clients. Within a few years, Prescott had amassed a crew with four different trucks to traverse Los Angeles and wash cars, but as the business grew, so did the expenses.

“It got into this cycle where I couldn’t stop, the clients were increasing but so were all the costs,” Prescott says. Those struggles began to shape how Auto Vault in its current iteration came to be. In an effort to cut down on travel costs, Prescott made his move into Beverly Hills and was able to cut a deal to lease underground parking space in the Rodeo Collection and began offering free washes to customers who had purchased long-term travel wash contracts that Prescott had been unable to fulfill. With a home base set, a friend of Prescott’s, who worked as a mechanic, broached the idea of adding a car restoration element to the business. Their first customer drove a 1949 Bentley convertible down from Palm Springs to be fully restored. “We had no idea what we were doing. We had no clue how to actually restore a car,” Prescott admitted. So, in an effort to expand their business, the two men put themselves

through a little self-education. They set up a camera and filmed themselves taking apart the Bentley, every detailed step of the way, so they would have video evidence of exactly how to put it all back together once they were done. “It was a little trial and error, but we knew the most important thing was getting this car restored the way the customer wanted it, and so we were going to do whatever it took,” Prescott said. Eventually, the restoration was completed and the client was thrilled. Word of mouth spread, and more restoration projects started falling into Prescott’s lap, and as time wore on, his business turned into a sort of one-stop shop for all car storage and maintenance needs. “Our job is taking care of your car if you can’t, or just don’t want to do it,” Prescott said. The restoration and car wash aspect of the business has morphed into full service, round-the-clock vehicle care. Auto Vault offers a wide variety of pricing plans that can be tailored to the needs of the car owner, with various storage packages from monthto-month, to 6-12 months and longer, with all the bells and whistles – car wash and detail, gas fill-up, tire pressure checks, engine service and

maintenance, DMV license and registration, battery monitoring and much more, all inside a climate-controlled underground environment. “We’ve got many customers whom I’ve never even met, I’ve only communicated with them or their assistant over email,” Prescott said. “But they trust us with their vehicles, and that’s a responsibility I don’t take lightly.” Several years ago, Prescott’s operation moved out of the Rodeo Collection, across the street, to the third underground level at 440 N. Rodeo Dr. Some of Prescott’s favorite vehicles that have come through the garage include a Lamborghini Diablo, Carrera GT and Mercedes Benz SLR. “You name it, we’ve probably seen it in our garage; we’ve seen the best of the best when it comes to exclusive cars,” Prescott said. “I just hope people understand that when you leave your car here, I’m treating it as if it’s my own car. I’m giving it the same love, care and attention that I would give my own personal family vehicle.” For more information on Auto Vault Storage, visit https://autovaultstorage.com/ . – Matt Lopez BEVERLY HILLS 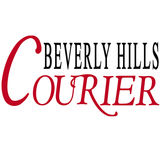