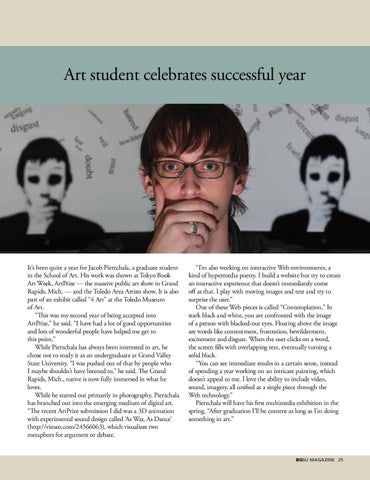 It’s been quite a year for Jacob Pierzchala, a graduate student in the School of Art. His work was shown at Tokyo Book Art Week, ArtPrize — the massive public art show in Grand Rapids, Mich. — and the Toledo Area Artists show. It is also part of an exhibit called “4 Art” at the Toledo Museum of Art. “This was my second year of being accepted into ArtPrize,” he said. “I have had a lot of good opportunities and lots of wonderful people have helped me get to this point.” While Pierzchala has always been interested in art, he chose not to study it as an undergraduate at Grand Valley State University. “I was pushed out of that by people who I maybe shouldn’t have listened to,” he said. The Grand Rapids, Mich., native is now fully immersed in what he loves. While he started out primarily in photography, Pierzchala has branched out into the emerging medium of digital art. “The recent ArtPrize submission I did was a 3D animation with experimental sound design called ‘As War, As Dance’ (http://vimeo.com/24566063), which visualizes two metaphors for argument or debate.

“I’m also working on interactive Web environments, a kind of hypermedia poetry. I build a website but try to create an interactive experience that doesn’t immediately come off as that. I play with moving images and text and try to surprise the user.” One of these Web pieces is called “Contemplation.” In stark black and white, you are confronted with the image of a person with blacked-out eyes. Floating above the image are words like contentment, frustration, bewilderment, excitement and disgust. When the user clicks on a word, the screen fills with overlapping text, eventually turning a solid black. “You can see immediate results in a certain sense, instead of spending a year working on an intricate painting, which doesn’t appeal to me. I love the ability to include video, sound, imagery, all unified as a single piece through the Web technology.” Pierzchala will have his first multimedia exhibition in the spring. “After graduation I’ll be content as long as I’m doing something in art.”