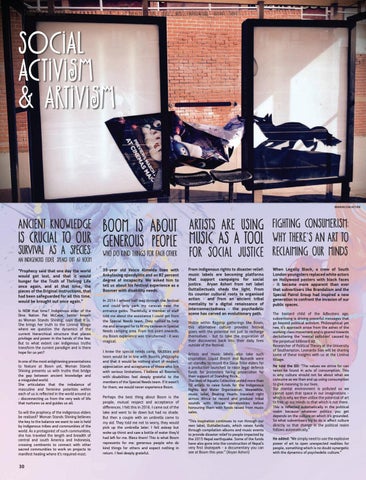 BOOM IS ABOUT ARTISTS ARE USING

SURVIVAL AS A SPECIES:

WHO DO KIND THINGS FOR EACH OTHER

IS CRUCIAL TO OUR GENEROUS PEOPLE AN INDIGENOUS ELDER SPEAKS OUT AT BOOM “Prophecy said that one day the world would get lost, and that it would hunger for the Truth of Thriving Life once again, and at that time, the pieces of the Original Instructions, that had been safeguarded for all this time, would be brought out once again.” Is NOW that time? Indigenous elder of the Dine Nation Pat McCabe, better known as Woman Stands Shining, says that it is. She brings her truth to the Liminal Village where we question the dynamics of the current hierarchical structure that places privilege and power in the hands of the few. But to what extent can indigenous truths transform the current paradigm and is there hope for us yet? In one of the most enlightening presentations to feature at Boom yet, Woman Stands Shining presents us with truths that bridge the gap between ancient knowledge and a misguided world. She articulates that the imbalance of masculine and feminine polarities within each of us is reflected in the world around us - disconnecting us from the very web of life that nurtures us and guides us all. So will the prophecy of the indigenous elders be realised? Woman Stands Shining believes the key to the balance we want to see is held by indigenous tribes and communities of the world. As a protagonist of such communities, she has traveled the length and breadth of central and south America and Indonesia, crossing continents to connect with other sacred communities to work on projects to manifest healing where it’s required most.

39-year old Vasco Almeida lives with Ankylosing spondylitis and an 82 percent degree of incapacity. We asked him to tell us about his festival experience as a Boomer with disability needs. In 2014 I arrived half way through the festival and could only park my caravan near the entrance gates. Thankfully, a member of staff told me about the assistance I could get from the Special Needs team. They rushed to help me and arranged for to fit my caravan in Special Needs camping area. From this point onwards, my Boom experience was transformed - it was magical. I knew the special needs camp, facilities and team would be in line with Boom’s philosophy and that it would be nothing short of respect, appreciation and acceptance of those who live with serious limitations. I believe all Boomers with disabilities feel deeply grateful to the members of the Special Needs team. If it wasn’t for them, we would never experience Boom. Perhaps the best thing about Boom is the people, mutual respect and acceptance of differences. I felt this in 2016. I came out of the lake and went to lie down but had no shade. But then a couple with an umbrella came to my aid. They told me not to worry, they would pick up the umbrella later. I fell asleep but woke up thirst and saw a bottle of water they’d had left for me. Bless them! This is what Boom represents for me: generous people who do kind things for others and expect nothing in return. I feel deeply grateful.

FIGHTING CONSUMERISM: MUSIC AS A TOOL WHY THERE’S AN ART TO FOR SOCIAL JUSTICE RECLAIMING OUR MINDS

From indigenous rights to disaster relief: music labels are becoming platforms that support campaigns for social justice. Aryan Ashori from net label Outtallectuals sheds the light. From its counter cultural roots to organised action - and from an ancient tribal mentality to a digital renaissance of interconnectedness - the psychedelic scene has carved an evolutionary path. Visible within flagship gatherings like Boom, this alternative culture provides festival goers with the potential not just to recharge themselves - but to take the inspiration of their discoveries back into their daily lives outside of the festival. Artists and music labels also take such inspiration. Liquid Bloom and Numatik were on standby to record the Sioux Tribe elders for a production launched to raise legal defence funds for protesters facing prosecution for their support of Standing Rock. The likes of Aquatic Collective united more than 50 artists to raise funds for the Indigenous Rights and Water Organisation. Meanwhile, music label, Beating Hearts traveled right across Africa to record and produce tribal sounds with African communities before honouring them with funds raised from music sales. “This inspiration continues to run through our own label, Outtallectuals, which raises funds through compilation albums and music events to provide disaster relief to people impacted by the 2015 Nepal earthquake. Some of the funds have also gone into the construction of Nepal’s very first skatepark - a documentary you can see at Boom this year.” (Aryan Ashori)

When Legally Black, a crew of South London youngsters replaced white actors on Hollywood posters with black faces - it became more apparent than ever that subvertisers like Brandalism and the Special Patrol Group had inspired a new generation to confront the invasion of our public spaces. The bastard child of the Adbusters age, subvertising is driving powerful messages that go beyond political activism. Philosophical yet raw, it’s approach arose from the ashes of the working class movement and is geared towards decluttering the ‘mental pollution’ caused by the perpetual billboard ad. Researcher of Political Theory at the University of Southampton, Leonardo Sias will be sharing some of these insights with us at the Liminal Village. He told the DD: “The values we strive for can never be found in acts of consumption. This is why culture should not be about what we consume as we then end up using consumption to give meaning to our lives. Our mental environment is polluted so we cannot open that space in our imaginations which is why we then utilise the potential of art to free up our minds to that which is not there. This is reflected automatically in the political realm because whatever politics you get depends on the culture on which it’s grounded. So what subvertisers try to do is affect culture directly so that change in the political realm follows automatically.” He added: “We simply need to use the explosive power of art to open unexpected realities for people, something which is no doubt synergetic with the dynamics of psychedelic culture.” 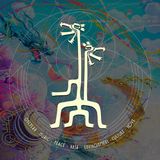