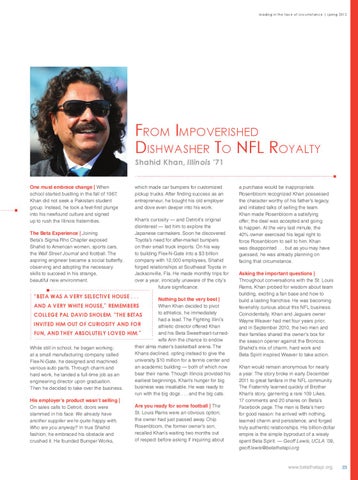 leading in the face of circumstance | spring 2012

FROM IMPOVERISHED DISHWASHER TO NFL ROYALTY Shahid Khan, Illinois ’71 One must embrace change | When school started bustling in the fall of 1967, Khan did not seek a Pakistani student group. Instead, he took a feet-first plunge into his newfound culture and signed up to rush the Illinois fraternities. The Beta Experience | Joining Beta’s Sigma Rho Chapter exposed Shahid to American women, sports cars, the Wall Street Journal and football. The aspiring engineer became a social butterfly, observing and adopting the necessary skills to succeed in his strange, beautiful new environment.

which made car bumpers for customized pickup trucks. After finding success as an entrepreneur, he bought his old employer and dove even deeper into his work. Khan’s curiosity — and Detroit’s original disinterest — led him to explore the Japanese carmakers. Soon he discovered Toyota’s need for after-market bumpers on their small truck imports. On his way to building Flex-N-Gate into a $3 billion company with 12,000 employees, Shahid forged relationships at Southeast Toyota in Jacksonville, Fla. He made monthly trips for over a year, ironically unaware of the city’s future significance.

Nothing but the very best | When Khan decided to pivot to athletics, he immediately COLLEGE PAL DAVID SHOLEM. “THE BETAS had a lead. The Fighting Illini’s INVITED HIM OUT OF CURIOSITY AND FOR athletic director offered Khan and his Beta Sweetheart-turnedFUN, AND THEY ABSOLUTELY LOVED HIM.” wife Ann the chance to endow their alma mater’s basketball arena. The While still in school, he began working; Khans declined, opting instead to give the at a small manufacturing company called university $10 million for a tennis center and Flex-N-Gate, he designed and machined an academic building — both of which now various auto parts. Through charm and bear their name. Though Illinois provided his hard work, he landed a full-time job as an earliest beginnings, Khan’s hunger for big engineering director upon graduation. business was insatiable. He was ready to Then he decided to take over the business. run with the big dogs . . . and the big cats. His employer’s product wasn’t selling | Are you ready for some football | The On sales calls to Detroit, doors were St. Louis Rams were an obvious option; slammed in his face: We already have the owner had just passed away. Chip another supplier we’re quite happy with. Rosenbloom, the former owner’s son, Who are you anyway? In true Shahid recalled Khan’s waiting two months out fashion, he embraced his obstacle and of respect before asking if inquiring about crushed it. He founded Bumper Works,

AND A VERY WHITE HOUSE,” REMEMBERS

a purchase would be inappropriate. Rosenbloom recognized Khan possessed the character worthy of his father’s legacy, and initiated talks of selling the team. Khan made Rosenbloom a satisfying offer; the deal was accepted and going to happen. At the very last minute, the 40% owner exercised his legal right to force Rosenbloom to sell to him. Khan was disappointed . . . but as you may have guessed, he was already planning on facing that circumstance. Asking the important questions | Throughout conversations with the St. Louis Rams, Khan probed for wisdom about team building, exciting a fan base and how to build a lasting franchise. He was becoming feverishly curious about this NFL business. Coincidentally, Khan and Jaguars owner Wayne Weaver had met four years prior, and in September 2010, the two men and their families shared the owner’s box for the season opener against the Broncos. Shahid’s mix of charm, hard work and Beta Spirit inspired Weaver to take action. Khan would remain anonymous for nearly a year. The story broke in early December 2011 to great fanfare in the NFL community. The Fraternity learned quickly of Brother Khan’s story, garnering a rare 109 Likes, 17 comments and 20 shares on Beta’s Facebook page. The man is Beta’s hero for good reason: he arrived with nothing, learned charm and persistence, and forged truly authentic relationships. His billion-dollar empire is the simple byproduct of a wisely spent Beta Spirit. — Geoff Lewis, UCLA ’09, geoff.lewis@betathetapi.org

Leading in the Face of Circumstance: A National Spokesman, a Reformed Drug Addict and NFL Royalty

Leading in the Face of Circumstance: A National Spokesman, a Reformed Drug Addict and NFL Royalty