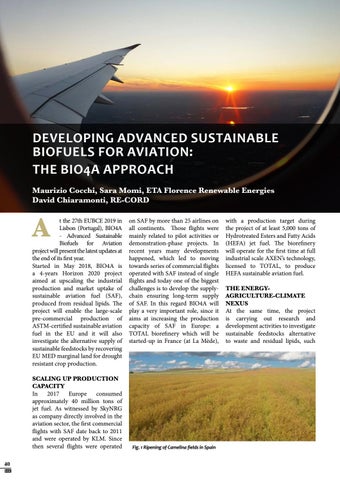 t the 27th EUBCE 2019 in Lisbon (Portugal), BIO4A - Advanced Sustainable Biofuels for Aviation project will present the latest updates at the end of its first year. Started in May 2018, BIO4A is a 4-years Horizon 2020 project aimed at upscaling the industrial production and market uptake of sustainable aviation fuel (SAF), produced from residual lipids. The project will enable the large-scale pre-commercial production of ASTM-certified sustainable aviation fuel in the EU and it will also investigate the alternative supply of sustainable feedstocks by recovering EU MED marginal land for drought resistant crop production. SCALING UP PRODUCTION CAPACITY In 2017 Europe consumed approximately 40 million tons of jet fuel. As witnessed by SkyNRG as company directly involved in the aviation sector, the first commercial flights with SAF date back to 2011 and were operated by KLM. Since then several flights were operated

on SAF by more than 25 airlines on all continents. Those flights were mainly related to pilot activities or demonstration-phase projects. In recent years many developments happened, which led to moving towards series of commercial flights operated with SAF instead of single flights and today one of the biggest challenges is to develop the supplychain ensuring long-term supply of SAF. In this regard BIO4A will play a very important role, since it aims at increasing the production capacity of SAF in Europe: a TOTAL biorefinery which will be started-up in France (at La MĂ¨de),

with a production target during the project of at least 5,000 tons of Hydrotreated Esters and Fatty Acids (HEFA) jet fuel. The biorefinery will operate for the first time at full industrial scale AXENâ&amp;#x20AC;&amp;#x2122;s technology, licensed to TOTAL, to produce HEFA sustainable aviation fuel. THE ENERGYAGRICULTURE-CLIMATE NEXUS At the same time, the project is carrying out research and development activities to investigate sustainable feedstocks alternative to waste and residual lipids, such 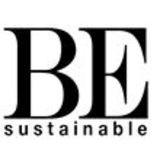