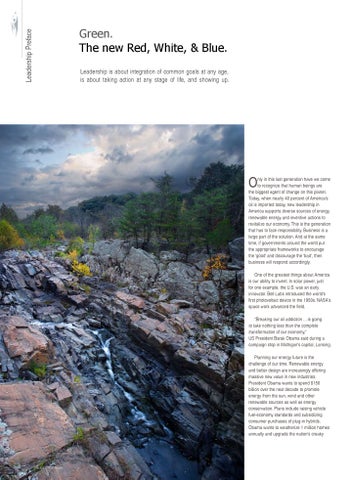 Green. The new Red, White, & Blue. Leadership is about integration of common goals at any age, is about taking action at any stage of life, and showing up.

nly in this last generation have we come to recognize that human beings are the biggest agent of change on this planet. Today, when nearly 40 percent of America’s oil is imported today, new leadership in America supports diverse sources of energy, renewable energy and inventive actions to revitalize our economy. This is the generation that has to face responsibility. Business is a large part of the solution. And at the same time, if governments around the world put the appropriate frameworks to encourage the ‘good’ and discourage the ‘bad’, then business will respond accordingly. One of the greatest things about America is our ability to invent. In solar power, just for one example, the U.S. was an early innovator. Bell Labs introduced the world’s first photovoltaic device in the 1950s. NASA’s space work advanced the field.

“Breaking our oil addiction ... is going to take nothing less than the complete transformation of our economy,” US President Barak Obama said during a campaign stop in Michigan’s capital, Lansing. Planning our energy future is the challenge of our time. Renewable energy and better design are increasingly offering massive new value in new industries. President Obama wants to spend $150 billion over the next decade to promote energy from the sun, wind and other renewable sources as well as energy conservation. Plans include raising vehicle fuel-economy standards and subsidizing consumer purchases of plug-in hybrids. Obama wants to weatherize 1 million homes annually and upgrade the nation’s creaky 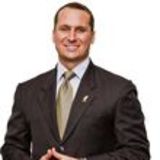 Welcome to the BEST OF DC: ‘Defining Change’ in American Leadership. This Inaugural Edition is the very first interactive publication of its...

Welcome to the BEST OF DC: ‘Defining Change’ in American Leadership. This Inaugural Edition is the very first interactive publication of its...