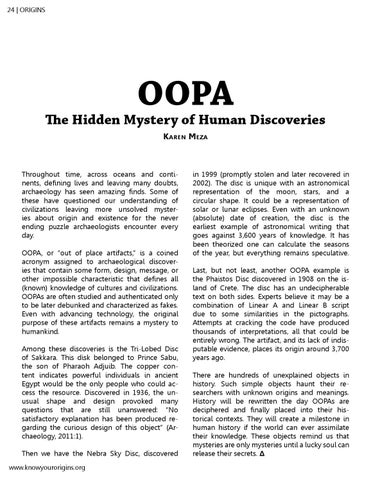 Throughout time, across oceans and continents, defining lives and leaving many doubts, archaeology has seen amazing finds. Some of these have questioned our understanding of civilizations leaving more unsolved mysteries about origin and existence for the never ending puzzle archaeologists encounter every day. OOPA, or “out of place artifacts,” is a coined acronym assigned to archaeological discoveries that contain some form, design, message, or other impossible characteristic that defines all (known) knowledge of cultures and civilizations. OOPAs are often studied and authenticated only to be later debunked and characterized as fakes. Even with advancing technology, the original purpose of these artifacts remains a mystery to humankind. Among these discoveries is the Tri-Lobed Disc of Sakkara. This disk belonged to Prince Sabu, the son of Pharaoh Adjuib. The copper content indicates powerful individuals in ancient Egypt would be the only people who could access the resource. Discovered in 1936, the unusual shape and design provoked many questions that are still unanswered: “No satisfactory explanation has been produced regarding the curious design of this object” (Archaeology, 2011:1). Then we have the Nebra Sky Disc, discovered www.knowyourorigins.org

in 1999 (promptly stolen and later recovered in 2002). The disc is unique with an astronomical representation of the moon, stars, and a circular shape. It could be a representation of solar or lunar eclipses. Even with an unknown (absolute) date of creation, the disc is the earliest example of astronomical writing that goes against 3,600 years of knowledge. It has been theorized one can calculate the seasons of the year, but everything remains speculative. Last, but not least, another OOPA example is the Phaistos Disc discovered in 1908 on the island of Crete. The disc has an undecipherable text on both sides. Experts believe it may be a combination of Linear A and Linear B script due to some similarities in the pictographs. Attempts at cracking the code have produced thousands of interpretations, all that could be entirely wrong. The artifact, and its lack of indisputable evidence, places its origin around 3,700 years ago. There are hundreds of unexplained objects in history. Such simple objects haunt their researchers with unknown origins and meanings. History will be rewritten the day OOPAs are deciphered and finally placed into their historical contexts. They will create a milestone in human history if the world can ever assimilate their knowledge. These objects remind us that mysteries are only mysteries until a lucky soul can release their secrets. ∆ 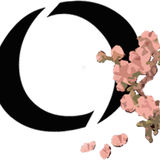