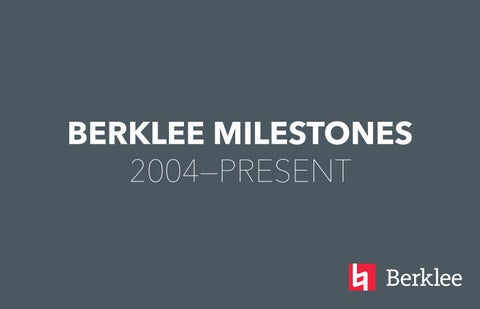 Adding a new chapter to its history of innovation, Berklee becomes the first music college in the U.S. to offer a course in turntable technique, attracting national attention and a visit from the Today Showâ&amp;#x20AC;&amp;#x2122;s Al Roker.

Berklee updates its mission statement to underscore the vital importance of the African cultural diaspora, and founds Africana Studies, a program focused on the study of black music and culture.

The Encore Gala annual fundraising event for City Music exceeds $1 million for the first time. City Music, the institutionâ&amp;#x20AC;&amp;#x2122;s educational program for underserved youth, serves thousands of students through a network of more than 40 programs. The gala has raised $30 million for the City Music Scholarship fund, which provides financial support to students to attend summer programs and enroll full-time at Berklee.

Berklee opens the Red Room at Cafe 939, a student-run, all-ages music venue and coffeehouse. The 200-seat venue will go on to host shows by Leon Bridges, Betty Who, Hozier, the Lumineers, and Karmin, among others.

The Giant Steps fundraising campaign kicks off with a goal of $40 million, and over 5 years, raises more than $54 million to support College initiatives.

Danilo PĂŠrez founds the Berklee Global Jazz Institute, which challenges students to explore their creativity, advance the social power of music, and connect music with nature. The institute launches a graduate program in 2015.

The assistive music technology (AMT) program is founded, empowering blind and visually impaired students to create and perform music at the highest levels.

ACADEMIC MINORS A student conducts a recording session at Berklee.

Berklee introduces academic minors, allowing students to expand beyond their major into other subject areas of interest, including dance, conducting, writing for TV and new media, and instrument repair, among others.

INSTITUTE FOR CREATIVE ENTREPRENEURSHIP Berkleeâ&amp;#x20AC;&amp;#x2122;s Institute for Creative Entrepreneurship is founded to educate and inspire the next generation of creative change-makers.

Berkleeâ&amp;#x20AC;&amp;#x2122;s first custom-built facility, 160 Massachusetts Avenue, boasts a 400-seat dining and performance hall, housing for 369 students, and a 10-studio recording complex that is among the largest of its kind in the U.S.

Berklee merges with Boston Conservatory, setting the stage to create the worldâ&amp;#x20AC;&amp;#x2122;s most dynamic and comprehensive program for music, dance, and theater education.

BERKLEE POPULAR MUSIC INSTITUTE The Berklee Popular Music Institute (BPMI) launches, taking students from the classroom to the stage of some of the worldâ&amp;#x20AC;&amp;#x2122;s biggest festivals, including Lollapalooza, Osheaga, and Outside Lands.

Significantly surpassing its $121 million goal, this campaign raises more than $160 million in support of scholarships, facilities, and the creation of institutes for musical discovery and artistry.