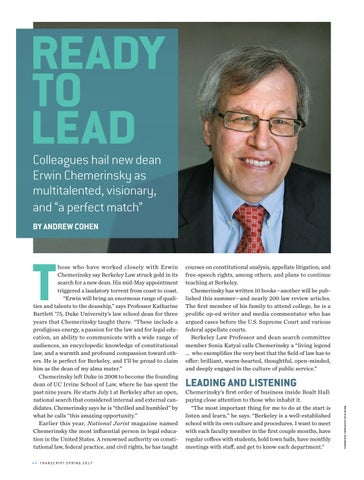 courses on constitutional analysis, appellate litigation, and free-speech rights, among others, and plans to continue teaching at Berkeley. Chemerinsky has written 10 books—another will be published this summer—and nearly 200 law review articles. The first member of his family to attend college, he is a prolific op-ed writer and media commentator who has argued cases before the U.S. Supreme Court and various federal appellate courts. Berkeley Law Professor and dean search committee member Sonia Katyal calls Chemerinsky a “living legend ... who exemplifies the very best that the field of law has to offer: brilliant, warm-hearted, thoughtful, open-minded, and deeply engaged in the culture of public service.”

Chemerinsky’s first order of business inside Boalt Hall: paying close attention to those who inhabit it. “The most important thing for me to do at the start is listen and learn,” he says. “Berkeley is a well-established school with its own culture and procedures. I want to meet with each faculty member in the first couple months, have regular coffees with students, hold town halls, have monthly meetings with staff, and get to know each department.”

hose who have worked closely with Erwin Chemerinsky say Berkeley Law struck gold in its search for a new dean. His mid-May appointment triggered a laudatory torrent from coast to coast. “Erwin will bring an enormous range of qualities and talents to the deanship,” says Professor Katharine Bartlett ’75, Duke University’s law school dean for three years that Chemerinsky taught there. “These include a prodigious energy, a passion for the law and for legal education, an ability to communicate with a wide range of audiences, an encyclopedic knowledge of constitutional law, and a warmth and profound compassion toward others. He is perfect for Berkeley, and I’ll be proud to claim him as the dean of my alma mater.” Chemerinsky left Duke in 2008 to become the founding dean of UC Irvine School of Law, where he has spent the past nine years. He starts July 1 at Berkeley after an open, national search that considered internal and external candidates. Chemerinsky says he is “thrilled and humbled” by what he calls “this amazing opportunity.” Earlier this year, National Jurist magazine named Chemerinsky the most influential person in legal education in the United States. A renowned authority on constitutional law, federal practice, and civil rights, he has taught

The annual magazine of UC Berkeley School of Law. 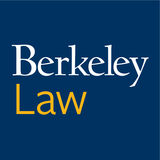