Catalysts for Change: Innovations in Equity, Inclusion, and Diversity at UC Berkeley 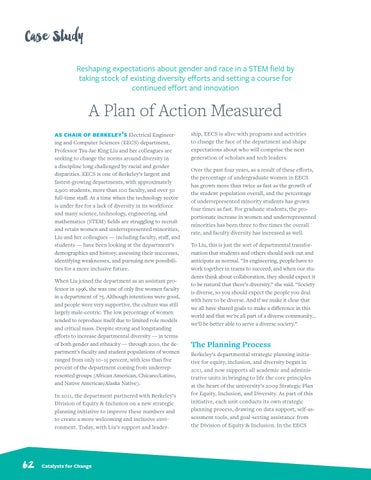 A Plan of Action Measured As chair of Berkeley’s Electrical Engineering and Computer Sciences (EECS) department, Professor Tsu-Jae King Liu and her colleagues are seeking to change the norms around diversity in a discipline long challenged by racial and gender disparities. EECS is one of Berkeley’s largest and fastest-growing departments, with approximately 2,900 students, more than 100 faculty, and over 50 full-time staff. At a time when the technology sector is under fire for a lack of diversity in its workforce and many science, technology, engineering, and mathematics (STEM) fields are struggling to recruit and retain women and underrepresented minorities, Liu and her colleagues — including faculty, staff, and students — have been looking at the department’s demographics and history, assessing their successes, identifying weaknesses, and pursuing new possibilities for a more inclusive future. When Liu joined the department as an assistant professor in 1996, she was one of only five women faculty in a department of 75. Although intentions were good, and people were very supportive, the culture was still largely male-centric. The low percentage of women tended to reproduce itself due to limited role models and critical mass. Despite strong and longstanding efforts to increase departmental diversity — in terms of both gender and ethnicity — through 2010, the department’s faculty and student populations of women ranged from only 10–15 percent, with less than five percent of the department coming from underrepresented groups (African American, Chicano/Latino, and Native American/Alaska Native). In 2011, the department partnered with Berkeley’s Division of Equity &amp; Inclusion on a new strategic planning initiative to improve these numbers and to create a more welcoming and inclusive environment. Today, with Liu’s support and leader-

ship, EECS is alive with programs and activities to change the face of the department and shape expectations about who will comprise the next generation of scholars and tech leaders. Over the past four years, as a result of these efforts, the percentage of undergraduate women in EECS has grown more than twice as fast as the growth of the student population overall, and the percentage of underrepresented minority students has grown four times as fast. For graduate students, the proportionate increase in women and underrepresented minorities has been three to five times the overall rate, and faculty diversity has increased as well. To Liu, this is just the sort of departmental transformation that students and others should seek out and anticipate as normal. “In engineering, people have to work together in teams to succeed, and when our students think about collaboration, they should expect it to be natural that there’s diversity,” she said. “Society is diverse, so you should expect the people you deal with here to be diverse. And if we make it clear that we all have shared goals to make a difference in this world and that we’re all part of a diverse community… we’ll be better able to serve a diverse society.”

The Planning Process Berkeley’s departmental strategic planning initiative for equity, inclusion, and diversity began in 2011, and now supports all academic and administrative units in bringing to life the core principles at the heart of the university’s 2009 Strategic Plan for Equity, Inclusion, and Diversity. As part of this initiative, each unit conducts its own strategic planning process, drawing on data support, self-assessment tools, and goal-setting assistance from the Division of Equity &amp; Inclusion. In the EECS

Catalysts for Change: Innovations in Equity, Inclusion, and Diversity at UC Berkeley