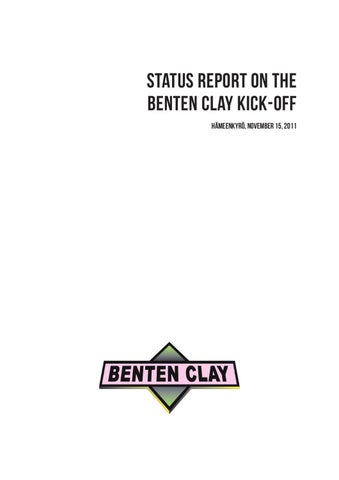 About Benten Clay In September 2011, we, the artists Sabine Schründer and Vera Hofmann got invited to Arteles – Creative Center in Hämeenkyrö, Finland, for a two month Artist - in - Residence - Program. There we invented an identity for our artistic cooperation called Benten Clay and claimed it to be a company producing mixed media. The name Benten Clay derives from our engagement with a current project wherein the material Bentonite Clay is crucial, a superhero so to speak when it comes to secure the world from the effects of nuclear waste. The design of our logo is a hommage to a rock exporting company in Olkiluoto. We as Benten Clay explore different aspects of power, investigating socio-political and economical threats as well as environmental concerns using photography, video, installation and performance. Our conceptual approach and the tonality of our work is multi-faceted to corroborate with the complexity of our times. Operating as a company addresses the art world’s market requirements in a playful way, opening up various channels of thinking and audience involvement. Benten Clay’s approach oscillates between slight provocation, research, documentation and poetical discretion. Its methods embrace different roles within a societal system, playing within the ambiguous boundaries between them.

We see Benten Clay as a platform for exploration, an extension of our previous and current work as singular artists; one in which we attempt to discover how far we can go to stretch and bend our mindsets. We do not question every single piece too much for the sake of an immediate whole. Instead, we publish each of them and open them up for discourse and consolidations when needed. In this way we built a body of work that shows the progress of our collaboration as well as approximations towards a deeper core of both our greater topics and Benten Clay itself.

Age of an End

An End can be perceived as both an opening and a limitation, implying both a relief and an alarming ultimatum. It may signify limited resources or political leftovers, synonyms for destruction, and at the same time the beginning of transformation. How this is perceived is highly relevant, especially in our times of significant global changes, be it political, economical or ecological. The time we are living in could be considered an Age of an End, and we, as Benten Clay are focussing on the greyzone between different modes of perception as well as the evasion of responsibility towards various forms of an End. Every beginning includes an End, but we immediately lose sight of that End when seduced by the new. It seems that human kind is driven mainly by ideas of progress, political power and economical value, disregarding the fact that every invention, every political union and every natural resource has its limits and abuttals. Responsibilty is not taken or easily pushed away by perceiving falsified information or by manipulating perspectives. Exploring ignored Ends and transferring the common means of information policy onto their artistic approach serves us as a hook to roam along the sentiences of an intricate modern society. Sometimes poetic and metaphoric, sometimes with pretended scientific preciseness and sometimes critically ironic, our works show a drive for finding consolating moral survival structures for the first world in an Age of an End.

On the mechanisms of power

› ability to act or produce an effect › capacity for being acted upon or undergoing an effect › legal or official authority, capacity, or right

› possession of control, authority, or influence over others › one having such power; specifically: a sovereign state › a controlling group: establishment › archaic: a force of armed men › chiefly dialect: a large number or quantity

› physical might › mental or moral efficacy › political control or influence

› a source or means of supplying energy; especially: electricity › motive power › the time rate at which work is done or energy emitted or transferred

A photographic sequence on subtle shifts between confidence, shaping a conviction and a need for solace.

The presence of power, tight cycles, hierarchical structures and the opacity of executive methods. A multitude of video screens aligned on opposing sides, each showing a shot of a machine: one rotating endlessly upwards, the other endlessly downwards.

An Informal Meeting About Nothing In Particular

Dates are set, meetings organized, decisions made. Innumerable meetings create the web of everyday structures of business and politics. But often these assemblies are more a ritual of dissipation, a vaguely wandering around within a defined set of time. They express the wrapping of repetitively empty flabbiness but also the proof of entitlement to be in a certain kind of position.

Although it is largely understood that nuclear power is a misused energy form in both ecological and economical planes, there exist 432 active plants worldwide, and new ones are being built and – positively agreed upon – in several countries. Since 1951, the start of the “peaceful use of nuclear energy”, there has not been a solution for ending the life cycle of nuclear material in a responsible and safe way. The approximate 10,000 metric tons of spent high-level nuclear fuel produced each year are stocked insecurely overground. Only few of it is partially reprocessed, and some illegally dumped. The half-life of its radioactivity is expected to last from 10,000 –  1 million years. Since 2007, Finland is building the world’s first repository for high-level nuclear waste on the half-island of Olkiluoto, named “Onkalo” (finnish for “little cave”). The official governmental permission is expected to go through in 2012, with operations beginning in 2020. Onkalo is planned to be filled with spent fuel for 100 years and then sealed. The aim of the construction is to securely contain waste for a minimum of 100,000 years without it being retrievable. For us, the first worldwide nuclear waste repository is connoted as a surrogate for the challenge of human kind to control coefficients that lie beyond control. The terminus End then unfolds itself up to a period of one million years by an indefinite endpoint. Our interest in pursuing this topic as an artistic work lies in facing a remote future and in researching parameters which are just partly predictable. In the efforts to be undertaken trying to control today’s outcomes for future uncertainties and the role of citizens within these procedures. We are at the beginning of this field of work. Our photographs and videos behave as a set of aesthetic and perceptual mappings on the topics of nuclear power and waste reposit. These mappings inform our approach, which is stimulated by a sense of awkward fascination underlying a silent irony, involving ideas of comfort, curiosity and desperation. Developing of our work will lead us into further interpretations on materiality, implausibility and time.

The Glossary contains information we think is relevant to understanding some background aspects of our work. The first part of it comprises information pertaining to the nuclear waste repository site of Onkalo, Finland.

If the barrier does not rise photographs, various sizes

A photographic approach on different aspects of fear, conditional probabilities, pretense of control and the shifting of power.

Yellowcake is an uranium concentrate powder obtained as an intermediate step in the processing of uranium ores through the milling and chemical processing of uranium fuel which is used in nuclear reactors. The three channel video shows different actions simultaneously: baking a yellow cake, importing it to Finland through security and customs, and handing it out to Finnish citizens. All three loops have different lenghts.

Ionizing radiation can be detected and made visible through an experiment called The Cloud Chamber. The video is a filmed document from a Cloud Chamber positioned near Olkiluoto nuclear power plant on September 11th, 2011, 14:10 – 14:12 p.m. In this case, Alpha particles, Beta particles, Muons and Protons leave traces that can be distinguished by their characteristic shapes.

One effect of the waste heat conducted from the Olkiluoto nuclear power plant into the sea is the farming of signal crayfish, the most economically relevant crayfish specie in Finland. Signal Crayfish are solitary animals with a genetic immunity to the crayfish plague and a distinctive antagonistic behaviour. The video shows various scenes of crayfish in an aquarium at Olkiluoto.

Behaviour of Lichen when swirled 970째 with 70 mp/h

Benten Clay joins forces with the experts in shaping future scenarios by making own experiments and graphical visualizations.

The nuclear waste repository of Onkalo will be filled with waste material for the next 100 years starting in 2020, and is then claimed to remain securely closed for the next 100,000 years. One of the difficult tasks is to document or â&#x20AC;&#x2DC;markâ&#x20AC;&#x2122; this site and to make the information public for such a long period of time in the future. That concern raises questions of how the world and humanity will develop within and along that time. The incapability of foretelling events in the far future, like territorial shifts, political systems, technological progress, environmental change and human life in general stand in contradiction with the ambition of some to utilize a technology which is at present time not fully controllable. Benten Clay will create an independent marker, it will read Ă&#x153;belst fett krasse Endzeit, Alter! A composition of coloquial very up-to-date German youth language that probably will not be understood even by the next generation. Translated it means something like A fuckin phat whacky armageddon and includes also a word play with Endzeit, Alter that could be read as End time, dude or an Age of an End. We have not yet decided on the material and the form for the marker. status: material tests

We propose a joyful sculpture for a Finnish village, through The Hub Cap Arch, made out of fallen-off hub caps along area roads. The Hub Cap Arch marks a short moment in the timeline of modern comforts. Status: start of negociations in December 2011

ACHIEVEMENTS OF THE FIRST TWO MONTHS

THE FUTURE OF BENTEN CLAY

GET IN TOUCH WITH BENTEN CLAY Benten Clay is a newly founded artistic corporation, run by the Berlin based artists Vera Hofmann and Sabine Schründer. This is the status r...

Benten Clay is a newly founded artistic corporation, run by the Berlin based artists Vera Hofmann and Sabine Schründer. This is the status r...