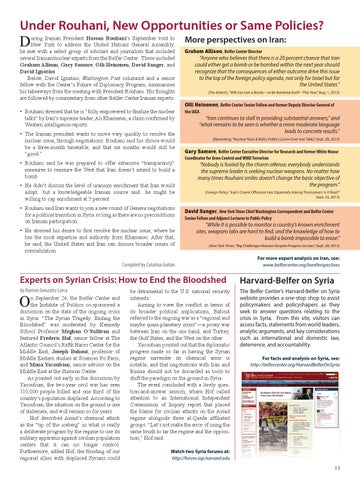 uring Iranian President Hassan Rouhani’s September visit to New York to address the United Nations General Assembly, he met with a select group of scholars and journalists that included several Iranian/nuclear experts from the Belfer Center. These included Graham Allison, Gary Samore, Olli Heinonen, David Sanger, and David Ignatius. Below, David Ignatius, Washington Post columnist and a senior fellow with the Center’s Future of Diplomacy Program, summarizes his takeaways from the meeting with President Rouhani. His thoughts are followed by commentary from other Belfer Center Iranian experts:

• Rouhani stressed that he is “fully empowered to finalize the nuclear talks” by Iran’s supreme leader, Ali Khamenei, a claim confirmed by Western intelligence reports.

• The Iranian president wants to move very quickly to resolve the nuclear issue, through negotiations. Rouhani said his choice would be a three-month timetable, and that six months would still be “good.” • Rouhani said he was prepared to offer extensive “transparency” measures to reassure the West that Iran doesn’t intend to build a bomb. • He didn’t discuss the level of uranium enrichment that Iran would adopt…but a knowledgeable Iranian source said…he might be willing to cap enrichment at 5 percent. • Rouhani said Iran wants to join a new round of Geneva negotiations for a political transition in Syria so long as there are no preconditions on Iranian participation. • He stressed his desire to first resolve the nuclear issue, where he has the most expertise and authority from Khamenei. After that, he said, the United States and Iran can discuss broader issues of normalization.

Graham Allison, Belfer Center Director “Anyone who believes that there is a 20 percent chance that Iran could either get a bomb or be bombed within the next year should recognize that the consequences of either outcome drive this issue to the top of the foreign policy agenda, not only for Israel but for the United States.” (The Atlantic, “Will Iran Get a Bomb—or Be Bombed Itself—This Year,” Aug. 1, 2013)

Gary Samore, Belfer Center Executive Director for Research and former White House Coordinator for Arms Control and WMD Terrorism “Nobody is fooled by the charm offense; everybody understands the supreme leader is seeking nuclear weapons. No matter how many times Rouhani smiles doesn’t change the basic objective of the program.” (Foreign Policy, “Iran’s Charm Offensive Has Diplomats Asking Themselves: Is It Real?” Sept. 23, 2013)

“While it is possible to monitor a country’s known enrichment sites, weapons labs are hard to find, and the knowledge of how to build a bomb impossible to erase.” (New York Times, “Big Challenges Remain Despite Progress on Iran,” Sept. 28, 2013)

Experts on Syrian Crisis: How to End the Bloodshed

The Belfer Center’s Harvard-Belfer on Syria website provides a one-stop shop to assist policymakers and policyshapers as they seek to answer questions relating to the crisis in Syria. From this site, visitors can access facts, statements from world leaders, analytic arguments, and key considerations such as international and domestic law, deterrence, and accountability.

n September 24, the Belfer Center and the Institute of Politics co-sponsored a discussion on the state of the ongoing crisis in Syria. “The Syrian Tragedy: Ending the Bloodshed” was moderated by Kennedy School Professor Meghan O’Sullivan and featured Frederic Hof, senior fellow at The Atlantic Council’s Rafik Hariri Center for the Middle East, Joseph Bahout, professor of Middle Eastern studies at Sciences Po Paris, and Mona Yacoubian, senior advisor on the Middle East at the Stimson Center. As pointed out early in the discussion by Yacoubian, the two-year civil war has seen 110,000 people killed and one third of the country’s population displaced. According to Yacoubian, the situation on the ground is one of stalemate, and will remain so for years. Hof described Assad’s chemical attack as the “tip of the iceberg” in what is really a deliberate program by the regime to use its military apparatus against civilian population centers that it can no longer control. Furthermore, added Hof, the flooding of our regional allies with displaced Syrians could

be detrimental to the U.S. national security interests. Aiming to view the conflict in terms of its broader political implications, Bahout referred to the ongoing war as a “regional and maybe quasi-planetary crisis”—a proxy war between Iran on the one hand, and Turkey, the Gulf States, and the West on the other. Yacoubian pointed out that the diplomatic progress made so far in having the Syrian regime surrender its chemical arms is notable, and that negotiations with Iran and Russia should not be discarded as tools to shift the paradigm on the ground in Syria. The event concluded with a lively question-and-answer session, where Hof called attention to an International Independent Commission of Inquiry report that placed the blame for civilian attacks on the Assad regime alongside three al-Qaeda affiliated groups. “Let’s not make the error of using the same brush to tar the regime and the opposition,” Hof said.

For facts and analysis on Syria, see: http://belfercenter.org/HarvardBelferOnSyria 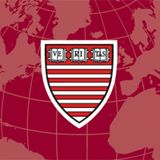