What makes a bee colony function?

Each human can be thirsty and hungry, feel warm or cold, and defend itself against diseases or enemies. So can a bee colony. The difference is that a human being is one living organism, connected by the nervous system and the bloodstream, whilst a bee colony consists of separate animals. However, in a way the colony behaves like a singular living organism, in that the individual bees work together like the cells of a human.

If a bee colony is hungry the forager bees must fly out to get nectar. When a forager returns with nectar she will look for a storer bee which will take up her nectar and process it. After that, the forager will dance, thus telling other foragers how far and in which direction the nectar can be found, the type of flowers and the quality of the nectar source.

If honey supplies are low in the nest (or hive) the storer bees will take up the nectar very fast from the foragers. If the storer bees are fully employed, for example looking for empty cells to store honey, it will take time for the forager bees to find a storer bee. If this time exceeds one minute the forager bee will not dance, and will not immediately leave the hive again. In this way the flow of nectar into the hive is regulated, according to the storage space available.

Another thing could happen. If incoming foragers cannot deliver their nectar fast enough, they rush through the hive in a special manner, shaking other bees and letting them know that more storers are required.

If a nest (or hive) gets too hot inside, it needs cooling. Otherwise the wax combs will become soft and sink, killing the larvae. Some worker bees will work as ventilators; using their wings as fans to augment the air flow inside the hive. If that is not enough, water collecting bees fly out and return with water which is spread over the cells: the evaporation of the water cools the nest. At the same time, forager bees that have collected nectar containing a lot of sugar will find it difficult to deliver to the storer bees which instead prefer diluted nectar or plain water. This behaviour stops the nectar flow and augments the water intake of the hive. When the hive has been cooled sufficiently the forager bees carrying water can hardly unload their water, while the nectar carriers are eagerly received, In this way the temperature of the hive is regulated.

The area of the nest with eggs and larvae (the brood nest) must be kept at 35°C. If the temperature falls below this, worker bees gather and heat the area with muscle movements.

There are many other regulatory mechanisms inside the hive. Pheromones are chemical substances transferred from one bee to another. Pheromones from the queen are taken up by the court of worker bees around her. These workers transfer the pheromones to other workers. The queen pheromones give the bees the message: the queen is alive and in good health. If a queen is taken away the workers feel it within an hour or two in a large colony and in a small nucleus it only takes minutes. You can hear the recognition in the sound of the bees. If a new queen is not introduced the workers will build queen cells around young larvae and rear them to become queens.

Pheromones are also sent out by a threatening bee to make other bees alert, and from a sting placed in our skin to call other bees to attack.

The guard bees that give their lives to chase enemies away can be compared to our leucocytes (white blood corpuscles) which attack bacteria invading our body. Many leucocytes die in that process. We cannot understand bees if we only look at single bees. We need to look at the complete colony as a functional entity to understand the life of the bee. 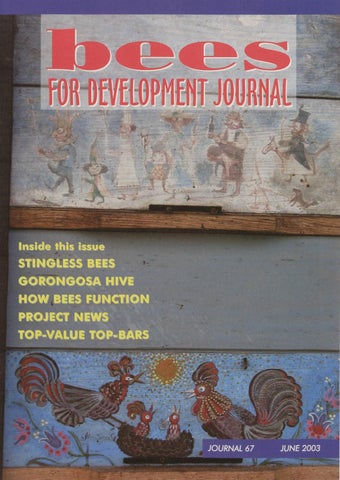