Honey hunters of the Sundarbans 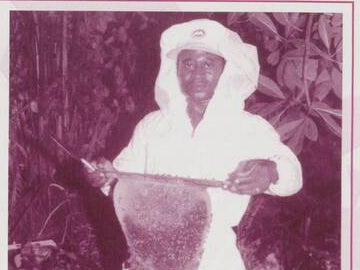 One of the most fascinating and dangerous areas of the world where honey hunting maintains its historical traditions and importance is the Sundarbans of Bangladesh and India.

The Sundarbans, which translates as “beautiful forest”, is the largest contiguous mangrove forest in the world, occupying an area of about 10,000 km2, 60% of the forest within Bangladesh and 40% within India. The Sundarbans is located in the delta of the River Ganges where it discharges into the Bay of Bengal.

Numerous international programmes have attempted to preserve the biological richness and beauty of the Sundarbans, and recently it has been acknowledged by UNESCO as a World Heritage Site. In Bangladesh the Sundarbans has been managed and protected by the Forest Department for nearly 125 years and has the status of a reserved forest with controlled and very limited human access (Eaton 1991).

No one Is allowed to live within the Sundarbans. The only permanent human presences are the Forest Department Ranger Stations.

The Sundarbans is home to the giant honeybee Apis dorsata. There is an annual migration of thousands of colonies of this magnificent honeybee into the Sundarbans, beginning in December and continuing through January and February.

Because of the nature of the mangrove forest, the tree species do not grow to great heights. Apis dorsata, which normally builds exposed nests high in the forest canopy, must here construct its large, single-comb nests relatively close to the ground, and therefore accessible to honey hunters.

In Bangladesh it is estimated that 2,000 honey hunters (termed ‘Mowallis’ in the Bangla language) utilise the Sundarbans during a controlled hunting season of two months in April and May (Zmarlicki 1994; FAO 1998). In the Sundarbans this exploitation - of the giant honeybee resource has a long history, with one of the earliest records being that of Buchanan, 1798: “A particular class ~ of men make a profession of collecting this ...honey and wax. They are Mohammedans and pay a duty to the Zemeendars (local land owners) for the liberty to follow their profession.”

The main period of honey production takes place during April to June, Nectar is obtained from three major tree species found within the Sundarbans. These are Khulshi, Aegiceras corniculatum, Goran, Ceriops decandra; and Keora, Sonneratia apetala. Zmarlicki (1994) lists an additional nine plant species that are important nectar and pollen resources for the bees. In Bangladesh the Sundarbans honey harvest is estimated to be between 130 and 185 tonnes per years (Zmarlicki 1994; Hussain & Acharya 1995). The wax harvest, “ citing data from the same authors, is estimated to be between 42 and 45 tonnes. Mowallis must obtain permits from the Forestry Department before entering the Sundarbans. The Forestry Department allocates quotas of honey and wax per man, currently set at 78 kg of honey and 20 kg of wax, for which the Forestry Department charges approximately US $4 for the honey allotment and US $3 for the wax allotment.

The honey harvested, estimated to be 50% of all honey produced in Bangladesh, is sold locally for US $2-3 per kilogram. The wax sells for about US $3 per kilogram. Processing of the honey is limited, usually being confined to a straining procedure, to remove extraneous matter that accumulates during the collection process. There is an exception to this found in one company, South Bengal Food Products, Khulna, which markets an attractive honey pack in50, 100 and 200g glass jars, advertising the honey as "collected from the Sundarbans." The packed honey retails for the equivalent of about US $7 per kilogram.

The honey as collected and processed by the Mowallis has a high moisture content, often exceeding 25% and therefore readily fermenting. However Sundarbans’ honey is a traditional food and medicine, is rapidly consumed by local people, and is in high demand. The Mowallis must enter the Sundarbans by boat: there are no roads in the mangrove forest that is dissected many times by river and tidal channels.

The honey hunters work in groups of 5-8 people, spending their days venturing into the forest to seek out nests. Their nights are spent on their boats anchored as far as possible out into the river channels. The reason for this is the presence of tigers in the forest. Even the security of a boat is no guarantee of safety as tigers are reported to swim out at night and carry men away (Burton 1933). This is the Royal Bengal Tiger, Panthera tigris tigris. |t is estimated that 250 tigers live within the Sundarbans, making it one of the largest biogeographical concentrations of tigers remaining in the world. Not only is the density of tigers high, but the tigers of the Sundarbans are also known to be frequent man-eaters.

In 1887 Baker wrote: “The sole distinctive characteristic of this tiger, so far as is known, is its utter fearlessness of man, and its inveterate propensity to kill and devour him on all and every opportunity.” The earliest known record of man-eating by tigers in the Sundarbans goes back to the mid-17th century (Khan 1987). There is much speculation as to the reasons for such behaviour, as man-eating tigers are a rarity in other areas of Asia where tigers were found, but nonetheless, in the Sundarbans, human attacks are  annual occurrences and honey hunters are frequent victims. Records maintained by the Bangladesh Forestry Department (Gani 2000) suggest a honey hunter mortality from tiger attacks of 20 persons per year, which is a 1% mortality rate based on the number of honey hunters allowed into the forest. At least as many are attacked but manage to survive the ferocity of tiger assaults.

The Mowallis are forbidden to carry guns and seek protection from tiger attacks by wearing amulets and charms, believing that powerful talismans will prevent tiger incidents.

When a giant honeybee colony is found, the Mowallis drive the bees off the comb with smoke and flame from a large burning torch. During their daytime plundering of honeybee nests, the Mowallis have little if any protective clothing with the exception of long scarves that they wrap around their heads.

Giant honeybees are capable of mounting a very stout defence of their colonies (Wallace 1869; Morse & Laigo 1969; Seeley et a/ 1982) and the Mowallis experience many hundreds of stings in their efforts to collect the honey. The sections of comb containing honey are quickly cut out and placed in wicker baskets for transport back to the honey boat.

The Mowallis attempt to get all the honey and nectar from a colony. The presence of tigers and the denseness of the mangrove forest make it important to exploit the individual colonies as quickly as possible. Once back at the boat, combs are deposited into a collection barrel, usually made of plastic with a 150 litre capacity. This composite of ripe and unripe honey is a major reason for the high moisture content of the final product.

Mowallis report that they can harvest the honey and wax from 7-10 colonies a day, and that the amount of honey from one colony will be 7-1Okg. Extrapolation of their reports suggests a honey ‘extraction’ of between 50-100kg per day per team.

How damaging the honey robbing is to the giant honeybees is unknown. In the Philippines, Morse and Laigo (1969) have shown that many thousands of adult bees are killed when fire is used to drive bees off the combs. However, the continual, annual harvesting of honey over many hundreds of years suggests that the population of Apis dorsata is large enough to sustain such pillage.

A large-scale project is being undertaken in co-operation with the Bangladesh Forestry Department to review the resources of the Sundarbans: current utilisation, and the effects of resource extraction on the sustainability of biodiversity within this special forest. This could eventually result in major changes in the traditions of honey hunting within the Sundarbans.

The author is a consultant to the Asian Development Bank project The Sundarbans: Biodiversity Conservation and recently spent a month reviewing the honey hunting activities within the Sundarbans. He expresses his thanks to Mr Osman Gani of the Bangladesh Forestry Department for allowing him access and exposure to the fascinating world of giant bee honey hunting in the land of the Royal Bengal Tiger.

BUCHANAN, F (1798) - An Account of a Journey Undertaken by Order of the Board of Trade through the Provinces of Chittagong and Tipperah in Order to Look Out for the Places Most Proper for the Cultivation of Spices (March-May 1798). As cited by R Eaton (1991) in: The Commons in South Asia: Societal Pressure and Environmental Integrity in the Sundarbans. J Seidensticker, R Kurin, A K Townsend (Eds). The International Center, Smithsonian Institution, Washington DC, USA.

KHAN,M R A (1987) The problem tiger of Bangladesh. RL Tilson and U Seal (Eds). Tigers of the World: the Biology, Biopolitics, Management, and Conservation of an Endangered Species. Noyes Publications, Park Ridge, Nj, USA.

MORSE,R A; LAIGO,F M (1969) - Apis dorsata in the Philippines. Monograph No 1, Philippine Association of Entomologists Inc.