I am a beekeeper and subscriber to B&D, a magazine I thoroughly admire and enjoy. I wonder whether B&D can discover more information than I on the likely consequences for bees and beekeepers of the introduction of GMOs?

I should state that I have no sympathies with claims of GM crop producers. I believe that this experiment is potentially disastrous for us and for the environment. There seem to be a number of likely consequences to the current rapid introduction of this untested, new technology. These include damage to our environment, to our own and future generations’ health, and to the long-term food security of the world, and enormous profit without responsibility to the agrochemical and bio-technical companies developing and marketing GM plants.

Marketing for GM foods claims that they will one day feed the world. This is pernicious deception. The world can grow enough food already but we cannot yet manage to distribute it fairly. People in the western world depend upon impoverished farmers in developing countries to grow cash crops for the commodity markets. Food shortages are a result of social, environmental, economic and political problems, not simply lack of food. Genetically engineered crops will condemn poor farmers to lifelong dependence on multinational companies who have no intention of feeding the world unless they are handsomely reimbursed for the service. Terminator technology ensures that poor farmers are caught in an endless and slavish cycle, unable to use seed from one year’s crop for the next.

The statement that GM crops could lead to lower pesticide use has been shown to be a deception by the agrochemical associations: they predict massive increases in sales as a result of this new technology.

As a beekeeper I am also concerned by the few indications I have found about the effects of GM crops on bees. Preliminary research has shown that there are dangers to beneficial insects. In a field trial of Monsanto's Bt-cotton in Thailand, 30% of bees around the test field died. Studies in the USA show that bees feeding on GM oilseed rape suffer damage to their foraging abilities. Do you know of any other research findings that might indicate less cause for concern? Is there any research monitoring the health of local bee populations, either independent or funded by the major bio-technical corporations?

I read of much dissatisfaction (and destruction of GM crops) in India, so I feel sure that beekeepers around the world will be sharing my anxiety. Perhaps you could cover some of these issues in B&D?

Clive de Bruyn presents the issues: Some people see genetic engineering (GE) benefiting agriculture and medicine. Others view it as a threat to life and nature: unethical, unnecessary, potentially harmful and only of benefit to multinational companies. Everyone has a view on GMOs. Where do beekeepers stand?

In February 1999, opposite the Houses of Parliament in London the organisation ActionAid unveiled an ice sculpture showing a fish mutated with vegetables. This was to highlight a British Member of Parliament's call for a five-year ban on GMOs. Prince Charles, a vociferous and outspoken GMO critic has claimed that scientists are invading territory that he believes is “The province of God alone.” Sir Paul McCartney vows to use his late wife’s meals to spearhead the fight. He is spending 3m to make Linda’s foods ‘totally’ free from GMOs. Every pack of food proclaims “Say No to GMO”. On the other side are the GE companies. They claim that GE is at the forefront of future developments in agriculture and food. They promise plants that will resist insect pests reducing the need for farmers to spray insecticides. “GMOs will help to resolve major agricultural problems”. They promise.

According to the media Frank Eggleton, an English beekeeper, became terrified of GMOs because of a GM oilseed rape trial near his hives. “My bees are in danger!” he cried, “The presence of GMOs will adulterate my honey. Wild flowers will be contaminated.” Ata village meeting Frank stated, “GM rape is a step too far. I will dump my honey rather than eat it.” The media was quick to use Frank’s allegations to inflame public fears about GMOs without substantiating any of his assumptions. I believe that Frank’s fear is genuine but I feel we should try and look at the problem rationally.

By the middle of the 1990s 3,500 trials of GMOs had been conducted in 34 countries, covering 56 crops. In 1998 there were at least 30m hectares of GM crops world-wide. Plant GMOs now have improved agronomic traits such as herbicide tolerance and resistance to pest and disease. How far should GE go? If scientists want society to set limits then the public needs better information. | will try to address some of the issues using questions raised by Prince Charles.

Do we need GM food?

Probably not. But if GE is not accepted in one country then that country may lose out to others that embrace the new technology. Without GM crops there might be a better bee environment with less intensive cultivation and increased forage.

GMOs could produce toxins, the true effects of which no one understands. Pollen could present a problem for bees. Scientists have some information on the effects of GM oilseed rape on bees. The GM oilseed rape can produce enzyme inhibitors that interfere with the insects’ digestion. This means that predatory insects eating the leaves develop a lethal case of indigestion. Researchers could not find the enzyme inhibitors in the oilseed rape pollen. They surmised that it might be there, at levels too low to detect, but be concentrated in the honey. Caged bees were fed on sugar containing protein at levels found in the leaves. This had no effect. Only when fed 10 times the concentration of the protein in the leaves did bees die prematurely.

GM sugar beet exists and sugar cane could be a candidate for GE. What effeet would GM sugar have on honeybees and what if it turned up in honey? At the moment there is no evidence that GMOs are not safe but the same was said of DDT and cigarettes. More independent long-term research is required.

What about the environmental consequences?

Molecular geneticists working at a cellular level in the GMO industry consider that GMOs are low-risk. Independent ecologists specialising in biology at the organism-ecosystem biosphere levels consider GMOs high-risk. All agree that science cannot predict what escaped GMOs will do, however, if GMOs are released into the environment the odds of controlling them are zero. There are several GMO research programmes in the United Kingdom. Bees benefit indirectly from this as some of the work is helping to fund research institutes working on bees. All investigations involving field tests inevitably cause GMO escapes.

Genes in GMOs can spread to related wild flowers. Such gene flow (outcrossing) is not unusual. The problem is that the genes inserted into GM crops may originate from viruses, fungi and bacteria giving the GM hybrids traits that could not be present naturally. Nectar secretion could be affected. Super weeds, could emerge requiring more toxic herbicides: precisely the opposite of what GMOs originally promised. If the hybrids contain insecticide genes they would kill feeding insects resulting in insect eating birds starving. Upsetting the ecosystem may well have knock on consequences for bees. The effects of GMOs could remain undetected for decades. Current short-term consequences so our grandchildren could be in for a real “Silent Spring.”

Is it sensible to test GMOs without regulations?

Scientists are concerned that their experiments are safe. They are subject to similar social, moral and ethical influences as everyone else. European Community Directives exist to protect humans and the environment. Currently consent to plant GM crops in the United Kingdom is for field trials only. Against this regulatory background I present these notes of discord:

- According to the Gene Watch Newsletter, there have been almost as many unauthorised as sanctioned releases of GMOs in the USA. Monsanto have been guilty of flouting safety rules at an experimental GMO site in Lincolnshire (United Kingdom) in 1999 and were fined £17,000.

- Currently there are no regulations with respect to solitary or social bees.

Will consumers be able to exercise choice?

The United Kingdom Government has decided that GMO foods should be labelled and new regulations took effect in 1999. Foods containing detectable modified DNA or protein will require labelling. This means that 95% of the approximately 30,000 products potentially derived from GM crops will not require labelling. I wait to see if the soya flour | use in my pollen supplement will be labelled.

Where does honey stand?

The EC Commission has decided that honey containing pollen from GM crops does not come within the scope of the present legislation on Novel Foods. It appears therefore that such honey does not have to mention the presence of GM pollen. The EC Commission in Brussels has set a food by GM ingredients of 1%. This is many times greater than any pollen levels usually present in honey.

What effect will GM crops have on poor countries?

The facts are that GMOs exist to produce food for rich countries. The management of GMOs undermine the principles of integrated pest control, which tries to be sympathetic to the environment. GM crops with their herbicide tolerance are subject to a strict regime of broad-spectrum herbicides that will eliminate arable weeds that bees forage on. Farmers who pay a royalty to grow the crop are tied to the company for fertiliser, pesticides and herbicide treatments necessary to support the plants. This moves poor farmers away from self-sufficiency towards dependency on multinational companies. Currently 80% of the crops grown in developing countries come from saved seed. Big business solution to this is ‘terminator’ technology. This involves using a special gene to sterilise any seeds the crops produces, forcing farmers to buy fresh seed each year. The importance of bees to pollinate seed crops could decline.

What sort of world do we want to live in?

It took 60 years to appreciate that DDT affected humans, but we are expected to instantly accept GMOs because there are no corpses! Following this provocative statement it must be appreciated that science can never offer people what they really want - total certainty. Proving something is absolutely safe is impossible. ask only: are the risks | justifiable?

The history of agricultural change is in the direction of growing crops “that no one eats but us” This has had disastrous consequences for other life forms that share the planet with humans. Recent surveys of the decline in bird, butterfly and bee populations are indicators of the changes that have already occurred. The thrust of GMOs must surely exacerbate such trends.

As we go to press, UK Prime Minister Tony Blair has warned that GM food may be bad for us: "There’s no doubt that there is potential for harm, both in terms of human safety and in the diversity of our environment, from GM food and crops”, said Mr Blair.

Genetic Engineering (GE) Transferring genes between species. In nature viable life forms are only produced when animals mate within their own species: DNA from human cells never joins with DNA from cows, trees, or bees. Only in the laboratory can genes be transferred between species.

GM Food: Food crops that have been developed with genetic engineering (transferring genes from other species, for example genes from plants into animals).

Terminator Gene: Genetic engineering to ensure that any seeds a crop produces are sterile, thus forcing farmers to buy fresh seed each year.

Clive de Bruyn is one of the invited lecturers at the Seminar being organised by Bees for Development and the Tropical Agriculture Association in April 2000. See 'What's on' page 11 for more details.

Your opinions are important to us. Let us know what you think! Letters will be published in B&D only with your permission. 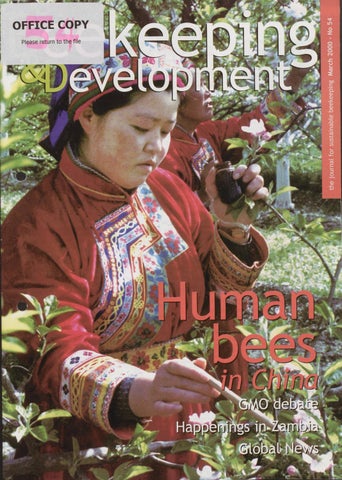