Don’t fiddle with the Top-bar hive!

A reply to the article by Mark Luckhurst, Kenya, frame for the Kenya top-bar hive published in June B&D 35

Your statements, Mark, very much resemble the position of a typical frame hive beekeeper who surprisingly finds himself confronted with new beekeeping technology without having been introduced to it.

Quite obviously you missed the idea of a simple, but mature hive design, modern, adapted and appropriate technology on its own, the top-bar hive. Modern in comparison with conventional frame hives, and appropriate to the needs and means of local people. Adapted to the biology and behaviour of the notorious “African honeybee”.

As consequence you seem to regard the top- bar hive as an intermediate design in need of improvement, and there must of course be frames!

To go into more detail with my comments:

1. You have come to the somewhat puzzling conclusion that frames have not been “developed” for the Kenya top-bar hive, because:

- it is hive suitable for rural beekeepers

- of its sloping sides

In fact, the horizontal top-bar hive was developed as an alternative to vertically supering frame hive systems. Its simple and “bee-friendly” design was response to the inappropriateness of the complicated, capital-intensive frame hive and honey processing technologies, as far as African, rural, sideline beekeepers are concerned.

The sloping sides of the Kenya top-bar hive reduce the attachment of (honey}combs, an advantage, which may compensate for the disadvantage of the more complicated cutting pattern compared to the straight-sided Tanzanian top-bar hive.

2. The use of “movable combs” excludes migratory beekeeping, naturally, but the use of movable combs does not exclude the use of centrifugal extractors. There are several African and Asian designs which are feasible, above all, the one which has been in use by the Kenyan Nightingale family. However, this feasibility does not mean automatically that centrifuge is realistic option for the rural small-scale beekeeper (see “transport” below).

3. Surprisingly you yourself seem to put little emphasis on the use of extractors. At the end of your article one wonders why you come to harvest comb honey from (wired!) frames.

4. In this context you forgot to explain why a framed comb is of “increased harvest value” compared to suspended comb. How could this be possible, especially as you did not apply any foundation? You mention the disadvantage of handling fragile combs during top-bar hive inspections. Of course, one has to adapt to the top-bar system which requires careful handling of bees and combs. But any technology, especially when “natural”, requires certain amount of sensibility and specific adaptation!

5. You mention hive inspection and honey cropping after dusk as being a disadvantage (because of soiled and inferior honeycombs), and you favour frames in the interest of seasonal migratory beekeeping. These facts have to be discussed in context: Zambian traditional beekeepers are teaching us an impressive lesson. The vast majority of 15,000 beekeepers in the North Western Province prove that daylight cropping and subsequent proper grading of honey are possible, if colonies are treated sensibly (Figure *1).

6. These beekeepers generally cover long distances on footpaths through the woodlands, thus transporting tremendous loads of comb honey in buckets or basins on their head (Figure 2*) or tied to bicycles. At home the produce is either brewed or pressed. wonder whether comb honey in frames would be an advantage here? If people realise that frames for their Kenya top-bar hives mean an additional labour input instead of being more profitable, they will forget about them very soon. So why frames for top-bar hives, when problems even arise when attention has to be paid to issues like “bee space” .?

There are a number of open questions and problems remaining with the top-bar hive system.

- the search for and testing of various local construction materials other than expensive wooden planks;

- adapted and respectful handling of bees during daylight and under appropriate climatic conditions;

- fearless beekeeping to be learnt and demonstrated by training and extension personnel;

- exchange of views and experiences at least on regional level.

These problems can be solved when systematic trials accompany long-term training and extension programmes.

The “Ruai Frame” you are promoting may well create wrong expectations, irritations, and even new problems among top-bar hive beekeepers, extension and training personnel, and last, but not least among the readers of B&D.

All of us dealing with the top-bar hive system should not question this technology in principle. It is not necessary to expose ourselves to the critics of those among frame- hive beekeepers who fail to understand differences of appropriateness among the various beekeeping technologies!

*Where reference to images or figures is made, please see original journal article 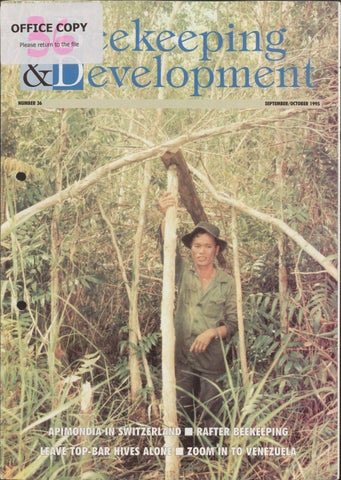