A success story from Tanzania 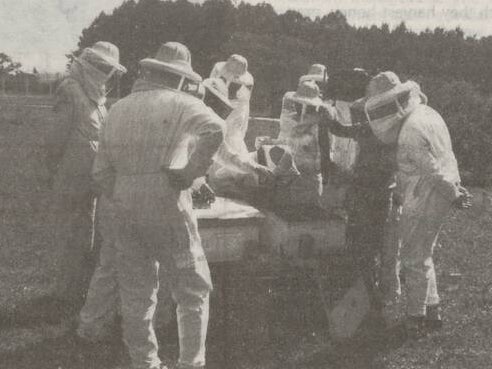 The Tabora Beekeepers’ Co-operative Society in central Tanzania has over 5000 members, for whom selling honey and wax is one of few sources of cash income. Indirectly a lot more people benefit — both families and the community at large through extra cash. Young people are encouraged to stay in their villages by the prospects of earning a living. All this depends upon the Co-operative being able to maintain and expand in markets.

Traidcraft Exchange is a British Charity which understands the value of trade in development, and particularly assists small community based businesses in developing countries. A few years ago Traidcraft was alerted to the fact that the Tabora Co-operative was unable to export honey because of lack of suitable containers. Jeremy Herklots from Traidcraft visited Tabora and found that technical and financial problems were severely affecting local marketing, as well as attempts at export. One problem was the requirement by the Tanzania Bureau of Standards for tamper-proof seals on honey jars. Eventually a supply of special seals was arranged and the Cooperative was able to use its stock of 90 000 glass jars, considerably boosting local sales of honey.

On the export front the difficulty was getting lacquer-coated drums. Traidcraft Exchange established with UK honey importers that beeswax itself could be used as a lining, and supplies of beeswax are no problem at Tabora! Another aspect of the container problem was the need for £6000 worth of plastic collecting buckets. One firm in Tanzania could make them, but lacked the raw materials. They would only supply customers who could pay cash in advance, which the Co-operative could not afford.

Traidcraft Exchange could not afford it either, and began looking for grants. It became clear that money might be available for a bigger project which would put the Co-operative on a more secure footing for the future. A visit to the Co-operative in 1988 established the need or repairs to lorries, improvements at the factory, further basic equipment for the beekeepers and staff training.

Traidcraft Exchange is now co-ordinating a project with a budget of £59 242 over two years. helping local staff to refurbish the Co-operatives lorry fleet. Money has been provided by CAFOD (the Catholic Fund for Overseas Development), ODA and other charitable trusts, and Traidcraft Exchange is paying some of the management costs. Nearly 60 000 sounds like a lot, but when you realise that, including family members, an estimated 40 000 people stand to benefit, it is very good value!

Traidcraft plc is the marketing side of the Charity, whose support has also been vital. An order for six tonnes of honey was placed in November 1988 and a 50% advance payment made - usual commercial practise is to pay after honey arrives and the quality is checked. Traidcraft is delighted that the honey is finally in the UK warehouse and the quality is good.