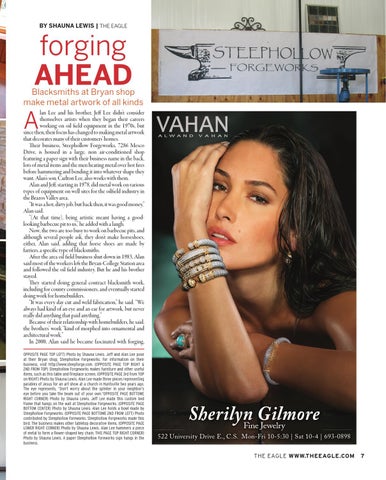 By Shauna Lewis | the eagle

Blacksmiths at Bryan shop make metal artwork of all kinds

lan Lee and his brother, Jeff Lee didn’t consider themselves artists when they began their careers working on oil field equipment in the 1970s, but since then, their focus has changed to making metal artwork that decorates many of their customers’ homes. Their business, Steephollow Forgeworks, 7286 Mesco Drive, is housed in a large, non air-conditioned shop featuring a paper sign with their business name in the back, lots of metal items and the men heating metal over hot fires before hammering and bending it into whatever shape they want. Alan’s son, Carlton Lee, also works with them. Alan and Jeff, starting in 1978, did metal work on various types of equipment on well sites for the oilfield industry in the Brazos Valley area. “It was a hot, dirty job, but back then, it was good money,” Alan said. “(At that time), being artistic meant having a goodlooking barbecue pit to us,” he added with a laugh. Now, the two are too busy to work on barbecue pits, and although several people ask, they don’t make horseshoes, either, Alan said, adding that horse shoes are made by farriers, a specific type of blacksmiths. After the area oil field business shut down in 1983, Alan said most of the workers left the Bryan-College Station area and followed the oil field industry. But he and his brother stayed. They started doing general contract blacksmith work, including for county commissioners, and eventually started doing work for homebuilders. “It was every day cut and weld fabrication,” he said. “We always had kind of an eye and an ear for artwork, but never really did anything that paid anything.” Because of their relationship with homebuilders, he said, the brothers’ work “kind of morphed into ornamental and architectural work.” In 2000, Alan said he became fascinated with forging, OPPOSITE PAGE TOP LEFT) Photo by Shauna Lewis. Jeff and Alan Lee pose at their Bryan shop, Steephollow Forgeworks. For information on their business, visit http://www.steepforge.com. (OPPOSITE PAGE TOP RIGHT & 2ND FROM TOP) Steephollow Forgeworks makes furniture and other useful items, such as this table and fireplace screen. (OPPOSITE PAGE 3rd from TOP on RIGHT) Photo by Shauna Lewis. Alan Lee made three pieces representing parables of Jesus for an art show at a church in Huntsville two years ago. The eye represents, “Don’t worry about the splinter in your neighbor’s eye before you take the beam out of your own.”OPPOSITE PAGE BOTTOME RIGHT CORNER) Photo by Shauna Lewis. Jeff Lee made this custom bed frame that hangs on the wall at Steephollow Forgeworks. (OPPOSITE PAGE BOTTOM CENTER) Photo by Shauna Lewis. Alan Lee holds a bowl made by Steephollow Forgeworks. (OPPOSITE PAGE BOTTOME 2ND FROM LEFT) Photo contributed by Steephollow Foreworks. Steephollow Forgeworks made this bird. The business makes other tabletop decorative items. (OPPOSITE PAGE LOWER RIGHT CORNER) Photo by Shauna Lewis. Alan Lee hammers a piece of metal to form a flower-shaped key chain. THIS PAGE TOP RIGHT CORNER) Photo by Shauna Lewis. A paper Steephollow Foreworks sign hangs in the business.