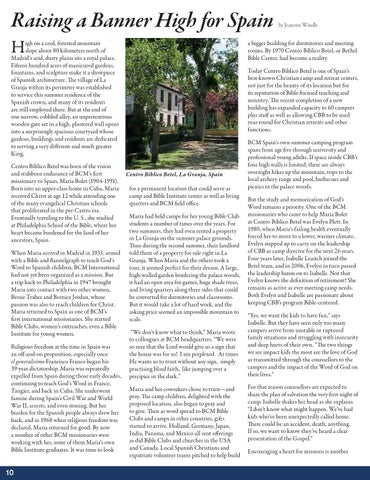 igh on a cool, forested mountain slope about 80 kilometers north of Madrid’s arid, dusty plains sits a royal palace. Fifteen hundred acres of manicured gardens, fountains, and sculpture make it a showpiece of Spanish architecture. The village of La Granja within its perimeter was established to service this summer residence of the Spanish crown, and many of its residents are still employed there. But at the end of one narrow, cobbled alley, an unpretentious wooden gate set in a high, plastered wall opens into a surprisingly spacious courtyard whose gardens, buildings and residents are dedicated to serving a very different and much greater King. Centro Bíblico Betel was born of the vision and stubborn endurance of BCM’s first missionary to Spain, Maria Bolet (1904-1991). Born into an upper-class home in Cuba, Maria received Christ at age 12 while attending one of the many evangelical Christian schools that proliferated in the pre-Castro era. Eventually traveling to the U. S., she studied at Philadelphia School of the Bible, where her heart became burdened for the land of her ancestors, Spain. When Maria arrived in Madrid in 1933, armed with a Bible and flannelgraph to teach God’s Word to Spanish children, BCM International had not yet been organized as a mission. But a trip back to Philadelphia in 1947 brought Maria into contact with two other women, Bessie Traber and Bernice Jordan, whose passion was also to reach children for Christ. Maria returned to Spain as one of BCM’s first international missionaries. She started Bible Clubs, women’s outreaches, even a Bible Institute for young women. Religious freedom at the time in Spain was an off-and-on proposition, especially once el generalisimo Francisco Franco began his 39-year dictatorship. Maria was repeatedly expelled from Spain during those early decades, continuing to teach God’s Word in France, Tangier, and back in Cuba. She underwent famine during Spain’s Civil War and World War II, arrests, and even stoning. But her burden for the Spanish people always drew her back, and in 1968 when religious freedom was declared, Maria returned for good. By now a number of other BCM missionaries were working with her, some of them Maria’s own Bible Institute graduates. It was time to look

a bigger building for dormitories and meeting rooms. By 1970 Centro Bíblico Betel, or Bethel Bible Center, had become a reality. Today Centro Bíblico Betel is one of Spain’s best-known Christian camp and retreat centers, not just for the beauty of its location but for its reputation of Bible-focused teaching and ministry. The recent completion of a new building has expanded capacity to 60 campers plus staff as well as allowing CBB to be used year-round for Christian retreats and other functions.

Centro Bíblico Betel, La Granja, Spain for a permanent location that could serve as camp and Bible Institute center as well as living quarters and BCM field office. Maria had held camps for her young Bible Club students a number of times over the years. For two summers, they had even rented a property in La Granja on the summer palace grounds. Then during the second summer, their landlord told them of a property for sale right in La Granja. When Maria and the others took a tour, it seemed perfect for their dream. A large, high-walled garden bordering the palace woods, it had an open area for games, huge shade trees, and living quarters along three sides that could be converted for dormitories and classrooms. But it would take a lot of hard work, and the asking price seemed an impossible mountain to scale. “We don’t know what to think,” Maria wrote to colleagues at BCM headquarters. “We were so sure that the Lord would give us a sign that the house was for us! I am perplexed. At times He wants us to trust without any sign, simply practising blind faith, like jumping over a precipice in the dark.” Maria and her coworkers chose to trust—and pray. The camp children, delighted with the proposed location, also began to pray and to give. Then as word spread to BCM Bible Clubs and camps in other countries, gifts started to arrive. Holland, Germany, Japan, India, Panama, and Mexico all sent offerings as did Bible Clubs and churches in the USA and Canada. Local Spanish Christians and expatriate volunteer teams pitched to help build

BCM Spain’s own summer camping program spans from age five through university and professional young adults. If space inside CBB’s four high walls is limited, there are always overnight hikes up the mountain, trips to the local archery range and pool, barbecues and picnics in the palace woods. But the study and memorization of God’s Word remains a priority. One of the BCM missionaries who came to help Maria Bolet at Centro Bíblico Betel was Evelyn Plett. In 1980, when Maria’s failing health eventually forced her to move to a lower, warmer climate, Evelyn stepped up to carry on the leadership of CBB as camp director for the next 26 years. Four years later, Isabelle Leaitch joined the Betel team, and in 2006, Evelyn in turn passed the leadership baton on to Isabelle. Not that Evelyn knows the definition of retirement! She remains as active as ever meeting camp needs. Both Evelyn and Isabelle are passionate about keeping CBB’s program Bible-centered. “Yes, we want the kids to have fun,” says Isabelle. But they have seen only too many campers arrive from unstable or ruptured family situations and struggling with insecurity and deep hurts of their own. “The two things we see impact kids the most are the love of God as transmitted through the counsellors to the campers and the impact of the Word of God on their lives.” For that reason counsellors are expected to share the plan of salvation the very first night of camp. Isabelle shakes her head as she explains. “I don’t know what might happen. We’ve had kids who’ve been unexpectedly called home. There could be an accident, death, anything. If so, we want to know they’ve heard a clear presentation of the Gospel.” Encouraging a heart for missions is another 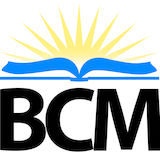