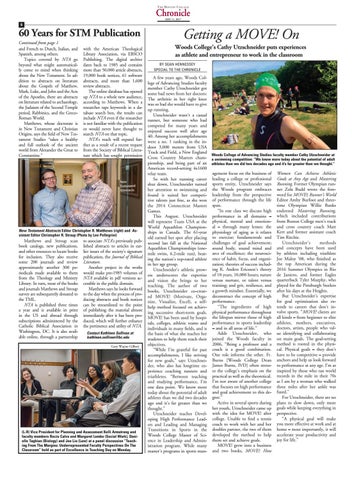 T he B oston C ollege

60 Years for STM Publication Continued from page 1 and French to Dutch, Italian, and Spanish, among others. Topics covered by NTA go beyond what might automatically come to mind when thinking about the New Testament. In addition to abstracts on literature about the Gospels of Matthew, Mark, Luke, and John and the Acts of the Apostles, there are abstracts on literature related to archaeology, the Judaism of the Second Temple period, Rabbinics, and the GrecoRoman World. Matthews, whose doctorate is in New Testament and Christian Origins, says the field of New Testament Studies “takes a healthy and full outlook of the ancient world from Alexander the Great to Constantine.”

with the American Theological Library Association, via EBSCO Publishing. The digital archive dates back to 1985 and contains more than 50,000 article abstracts, 19,000 book notices, 61 software abstracts, and more than 1,600 review abstracts. The online database has opened up NTA to a whole new audience, according to Matthews. When a researcher taps keywords in a database search box, the results can include NTA even if the researcher is not familiar with the publication or would never have thought to search NTA on that topic. NTA’s reach will expand further as a result of a recent request from the Society of Biblical Literature which has sought permission

Matthews and Stroup scan book catalogs, new publications, and other resources to locate books for inclusion. They also receive some 200 journals and review approximately another 300 periodicals made available to them from the Theology and Ministry Library. In turn, most of the books and journals Matthews and Stroup survey are subsequently donated to the TML. NTA is published three times a year and is available in print in the US and abroad through subscriptions administered by the Catholic Biblical Association in Washington, DC. It is also available online, through a partnership

to associate NTA’s previously published abstracts to articles in earlier issues of the society’s signature publication, the Journal of Biblical Literature. Another project in the works would make pre-1985 volumes of NTA available in pdf versions accessible in the public domain. Matthews says he looks forward to the day when the process of producing abstracts and book notices can be streamlined to the point of publishing the material almost immediately after it has been produced, which will further enhance the pertinence and utility of NTA. Contact Kathleen Sullivan at kathleen.sullivan@bc.edu Gary Wayne Gilbert

(L-R) Vice President for Planning and Assessment Kelli Armstrong and faculty members Rocío Calvo and Margaret Lombe (Social Work), Danielle Taghian (Biology) and Joe Liu (Law) at a panel discussion “Teaching From The Margins: Underrepresented Faculty Perspectives On The Classroom” held as part of Excellence in Teaching Day on Monday.

Getting a MOVE! On

A few years ago, Woods College of Advancing Studies faculty member Cathy Utzschneider got some bad news from her doctors: The arthritis in her right knee was so bad she would have to give up running. Utzschneider wasn’t a casual runner, but someone who had competed for many years and enjoyed success well after age 40. Among her accomplishments were a no. 1 ranking in the indoor 3,000 meters from USA Track and Field, a New England Cross Country Masters championship, and being part of an American record-setting 4x1600 relay team. So with her running career shut down, Utzschneider turned her attention to swimming and found it suited her competitive talents just fine, as she won the 2014 Connecticut Masters Games. This August, Utzschneider will represent Team USA at the World Aquathlon Championships in Canada. The 61-year old earned her spot after placing second last fall at the National Aquathlon Championships (onemile swim, 6.2-mile run), beating the nation’s top-rated athlete in her age group. Utzschneider’s athletic prowess underscores the expertise and vision she brings to her teaching. The author of two books, Utzschneider co-created MOVE! (Motivate, Organize, Visualize, Excel), a selfhelp method focused on achieving successive short-term goals. MOVE! has been used by hospitals, colleges, athletic teams and individuals in many fields, and is the basis of what she teaches her students to help them reach their objectives. “While I’m grateful for past accomplishments, I like striving for new goals,” says Utzschneider, who also has longtime experience coaching runners and triathletes. “Between teaching and studying performance, I’m one data point. We know more today about the potential of adult athletes than we did two decades ago and it’s far greater than we thought.” Utzschneider teaches Developing High Performance Leaders and Leading and Managing Transitions in Sports in the Woods College Master of Science in Leadership and Administration program. While many master’s programs in sports man-

Woods College of Advancing Studies faculty member Cathy Utzschneider at a swimming competition: “We know more today about the potential of adult athletes than we did two decades ago and it’s far greater than we thought.”

agement focus on the business of leading a college or professional sports entity, Utzschneider says the Woods program embraces leadership from the perspective of performance through the life span. “In one class we discuss high performance in all domains – physical, mental and emotional – through many lenses: the physiology of aging as it relates to exercise; fundamentals and challenges of goal achievement; sound body, sound mind and arcs of excellence; the neuroscience of habit, focus, and organization; theories of success including K. Anders Ericsson’s theory of 10 years, 10,000 hours; nature versus nurture, or talent versus training; and grit, resilience, and a growth mindset. Essentially, we deconstruct the concept of high performance. “The ingredients of high physical performance throughout the lifespan mirror those of high performance in sports leadership – and in all areas of life.” Adds Utzschneider, who joined the Woods faculty in 2006, “Being a professor and a coach is a good combination. One role informs the other. Fr. Burns [Woods College Dean James Burns, IVD] often stresses the college’s emphasis on the practical as well as the theoretical. I’m not aware of another college that focuses on high performance and goal achievement to this degree.” Active in several sports during her youth, Utzschneider came up with the idea for MOVE! after college. Unable to find a tennis coach to work with her and her doubles partner, the two of them developed the method to help them set and achieve goals. MOVE! grew into a business and two books, MOVE!: How

Women Can Achieve Athletic Goals at Any Age and Mastering Running. Former Olympian runner Zola Budd wrote the foreword for MOVE!; Runner’s World Editor Amby Burfoot and threetime Olympian Willie Banks endorsed  Mastering Running, which included contributions from Boston College men’s track and cross country coach Matt Kerr and former assistant coach Tim Ritchie. Utzschneider’s methods and concepts have been used by athletes including triathlete Joe Maloy ’08, who finished as the top American during the 2016 Summer Olympics in Rio de Janiero, and former Eagles quarterback Tyler Murphy, who played for the Pittsburgh Steelers after his days at the Heights. But Utzschneider’s expertise for goal optimization also extends to careers that don’t involve sports. “MOVE! clients are all kinds – from beginner to elite athletes, mothers, executives, doctors, artists, people who value identifying and collaborating on main goals. The goal-setting method is rooted in the physical. Physical goals – they don’t have to be competitive – provide anchors and help us look forward to performance at any age. I’m as inspired by those who ran world records in the mile in their 70s as I am by a woman who walked three miles after her ankle was fused.” For Utzschneider, there are no plans to slow down, only more goals while keeping everything in perspective. “A physical goal will make you more effective at work and at home – most importantly, it will accelerate your productivity and joy for life.” 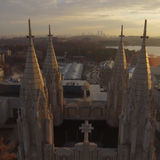