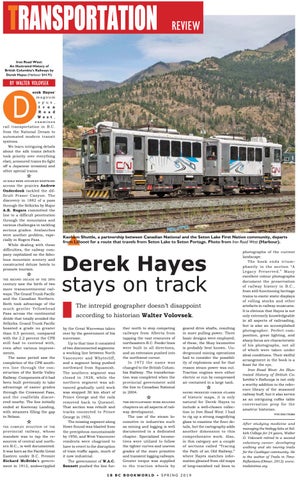 erek Hayes’ magnum o p u s , I r o n R o a d W e s t , examines rail transportation in B.C. from the National Dream to automated modern transit systems. We learn intriguing details about the silk trains (which took priority over everything else), armoured trains (to fight off a Japanese invasion) and other special trains.

AS RAILS WERE ADVANCED WESTWARD

across the prairies Andrew Onderdonk tackled the difficult Fraser Canyon. The discovery in 1882 of a pass through the Selkirks by Major A.B. Rogers committed the line to a difficult penetration through the mountains and various challenges in tackling serious grades. Avalanches were another problem, especially in Rogers Pass. While dealing with these difficulties, the railway company capitalized on the fabulous mountain scenery and constructed deluxe hotels to promote tourism.

THE SECOND DECADE OF THE 20TH

century saw the birth of two more transcontinental railways: The Grand Trunk Pacific and the Canadian Northern. Both took advantage of the much gentler Yellowhead Pass across the continental divide that totally avoided the Selkirks. Grand Trunk Pacific boasted a grade no greater than 0.5 percent, compared with the 2.2 percent the CPR still had to contend with, even after various improvements. The same period saw the completion of the CPR southern line through the construction of the Kettle Valley Railway. Components of it had been built previously to take advantage of easier grades through the Crowsnest Pass, and the coalfields discovered nearby. The line initially ended at Kootenay Landing, with steamers filling the gap to Nelson.

THE COMPLEX EVOLUTION OF THE

provincial railway, whose mandate was to tap the resources of central and northern B.C., is well documented. It was born as the Pacific Great Eastern under B.C. Premier Richard McBride’s government in 1912, and—crippled

Kaoham Shuttle, a partnership between Canadian National and the Seton Lake First Nation community, departs from Lillooet for a route that travels from Seton Lake to Seton Portage. Photo from Iron Road West (Harbour).

Derek Hayes stays on track The intrepid geographer doesn’t disappoint according to historian Walter Volovsek. by the Great War—was taken over by the government of his successor. Up to that time it consisted of two disconnected segments: a working line between North Vancouver and Whytecliff, and a segment being pushed northward from Squamish. The southern segment was closed in 1928, while the northern segment was advanced gradually until work was stopped 30 km short of Prince George and the rails removed back to Quesnel. That section was rebuilt and tracks connected to Prince George in 1952. The missing segment along Howe Sound was blasted from the precipitous mountainside by 1956, and West Vancouver residents were chagrined to have to revert to the disruption of train traffic again, much of it now industrial. The government of W.A.C. Bennett pushed the line fur-

ther north to stop competing railways from Alberta from tapping the vast resources of northeastern B.C. Feeder lines were built in all directions, and an extension pushed into the northwest corner. In 1972 the name was changed to the British Columbia Railway. The transformation was completed when the provincial government sold the line to Canadian National in 2004.

chapters on all aspects of railway development. The use of the steam locomotive in industries such as mining and logging is well documented in a dedicated chapter. Specialized locomotives were utilized to follow the tighter curves and uneven grades of the more primitive and transient logging railways. Greater torque was supplied to the traction wheels by

geared drive shafts, resulting in more pulling power. Three basic designs were employed; of these, the Shay locomotive is probably best known. Underground mining operations had to consider the possibility of explosions and for that reason steam power was out. Traction engines were either electric or run by compressed air contained in a large tank.

of historic maps, it is only natural for Derek Hayes to include a well-chosen collection in Iron Road West. I had to rig up a strong magnifying glass to examine the finer details, but the cartography adds another dimension to this comprehensive work. Also, in this category are a couple of sections called “Tracing the Path of an Old Railway,” where Hayes matches information gleaned from old maps of long-vanished rail lines to

photographs of the current landscape. The book ends triumphantly in the section “A Legacy Preserved.” Many excellent colour photographs document the preservation of railway history in B.C., from still functioning heritage trains to exotic static displays of rolling stocks and other artefacts in railway museums. It is obvious that Hayes is not only extremely knowledgeable in all aspects of railroading, but is also an accomplished photographer. Perfect composition, great lighting, and sharp focus are characteristic of his photographs, not all of which were taken under ideal conditions. Their skilful arrangement in the book is a feast for the eye. Iron Road West: An Illustrated History of British Columbia’s Railways is not only a worthy addition to the reference library of the seasoned railway buff, but it also serves as an intriguing coffee table conversation prop for the amateur historian. 9781550178388

After studying medicine and managing the biology labs at Selkirk College for 24 years, Walter O. Volovsek retired to a second voluntary career: developing walking and ski touring trails for the Castlegar community. He is the author of Trails in Time: Reflections (Otmar, 2012). www. trailsintime.org

BC BookWorld is a newspaper about books. Since 1987, four times per year, we produce Canada's largest-circulation independent publication about literature. Our newspaper is available via more than 700 distributors, or by subscription. We believe people can make up their own minds as to what they ought to read -- so we provide lively, up-to-date, unbiased news. http://bcbooklook.com