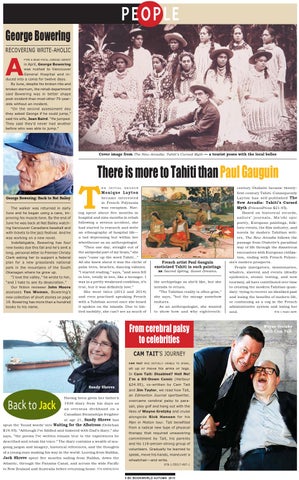 in April, George Bowering was rushed to Vancouver General Hospital and induced into a coma for twelve days. By June, despite his broken ribs and broken sternum, the rehab department said Bowering was in better shape post-incident than most other 79-yearolds without an incident. “On the second assessment day they asked George if he could jump,” said his wife, Jean Baird. “He jumped. They said they’d never had another before who was able to jump.”

Cover image from The New Arcadia: Tahiti’s Cursed Myth — a tourist poses with the local belles

There is more to Tahiti than Paul Gauguin George Bowering: Back to Nat Bailey The walker was returned in early June and he began using a cane, improving his muscle tone. By the end of June he was back at Nat Bailey watching Vancouver Canadians baseball and with tickets to the jazz festival. And he was working on a new novel. Indefatigable, Bowering has four new books due this fall and he’s sent a long, personal letter to Premier Christy Clark asking her to support a federal plan for a new grasslands national park in the mountains of the South Okanagan where he grew up. “I love the valley,” he wrote to her, “and I hate to see its desecration.” Our fiction reviewer John Moore assesses Ten Women, Bowering’s new collection of short stories on page 19. Bowering has more than a hundred books to his name.

Monique Layton became interested in French Polynesia was escapism. Having spent about five months in hospital and nine months in rehab following a serious accident, she had started to research and write an ethnography of hospital life— a tad depressing but within her wheelhouse as an anthropologist. “Then one day, straight out of the antipodal part of my brain,” she says “came up the word Tahiti...” All she knew about it was the cliché of palm trees, beaches, dancing vahines. “I started reading,” says, “and soon fell in love, totally in love, like a teenager. I was in a pretty weakened condition, it’s true, but it was definitely love.” She went twice (2012 and 2014) and even practised speaking French with a Tahitian accent once she heard it spoken on the islands. Due to limited mobility, she can’t see as much of

French artist Paul Gauguin exoticized Tahiti in such paintings as Sacred Spring, Sweet Dreams. the archipelago as she’d like, but she intends to return. “The Tahitian reality is often grim,” she says, “but the mirage somehow endures. As an anthropologist, she wanted to show how and why eighteenth-

sit up or move his arms or legs. In Cam Tait: Disabled? Hell No! I’m a Sit-Down Comic (Harbour

Sandy Shreve Having been given her father’s 1936 diary from his days as an overseas deckhand on a Canadian Steamships freighter at age 21, Sandy Shreve has spun the ‘found words’ into Waiting for the Albatross (Oolichan $19.95). “Although I’ve fiddled and tinkered with Dad’s diary,” she says, “the poems I’ve written remain true to the experiences he described and retain his voice.” The diary contains a wealth of seagoing jargon and imagery, historical references, and the thoughts of a young man making his way in the world. Leaving from Halifax, Jack Shreve spent five months sailing from Halifax, down the Atlantic, through the Panama Canal, and across the wide Pacific to New Zealand and Australia before returning home. 978-0889823044

$24.95), co-written by Cam Tait and Jim Taylor, we read how Tait, an Edmonton Journal sportswriter, overcame cerebral palsy to parasail, play golf and hang out with the likes of Wayne Gretzky and cruise alongside Rick Hansen for his Man in Motion tour. Tait benefited from a radical new type of physical therapy that required unwavering commitment by Tait, his parents and his 116-person-strong group of volunteers. Gradually he learned to speak, move his hands, maneuver a wheelchair—and write. 978-1-55017-697-1

century Otaheite became twentyfirst-century Tahiti. Consequently Layton has self-published The New Arcadia: Tahiti’s Cursed Myth (FriesenPress $21.95). Based on historical records, sailors’ journals, Ma’ohi epic poetry, European paintings, folkloric events, the film industry, and novels by modern Tahitian writers, The New Arcadia follows the passage from Otaheite’s paradisal way of life through the disastrous encounters with European civilization, ending with French Polynesia’s modern prospects. People (navigators, missionaries, whalers, slavers) and events (deadly epidemics, atomic testing, and now tourism), all have contributed over time to creating the modern Tahitian quandary: trying to recover an idealized past and losing the benefits of modern life, or continuing as a cog in the French administrative system and losing her soul. 978-1-4620-3649

BC BookWorld is a newspaper about books. We've been around since 1987. We aspire to middle-brow usefulness. Four times per year, we produce Canada's largest-circulation independent publication about literature.Our newspaper is available via more than 900 non-virtual distributors, or by subscription. We believe people can make up their own minds as to what they ought to read -- so we provide lively, up-to-date, unbiased news. http://bcbooklook.com