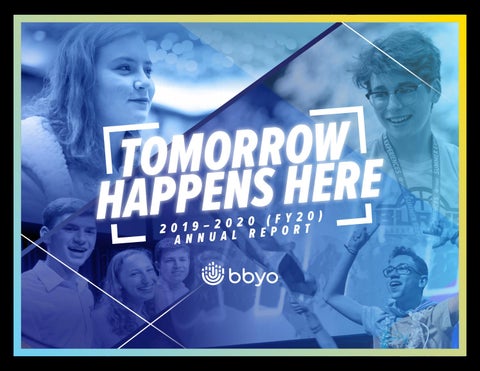 REFLECTING ON OUR YEAR

Dear Friends, BBYO’s 2019–2020 theme, Tomorrow Happens Here, speaks to the role that young people play in defining the future. That theme plays well when constants like regional conventions, chapter sleepovers, and trips to Israel mark the contours of a teen’s year. But what happens when the unimaginable becomes real? Perhaps Today Happens Here would have been a more appropriate theme to mark the urgency of BBYO’s mission.      An abrupt end to “life as usual” in early March caused humanity to adjust to a new reality marked by fear and isolation. Through grit and necessity, BBYO teens forged a digital platform, BBYO On Demand, to keep our community connected during the most difficult times. We mourned the things we lost—regional conventions, sports, and proms—as we replaced them with laughter, song, and prayer. A new adolescent rhythm emerged through yoga classes with teens from Bulgaria on Tuesday, Israeli cooking classes on Thursday, time zone-based Havdalah services on Saturday, and more. We even had a drop-in from AZA alumnus, Mark Cuban, who discussed leadership and the opportunities one can find during times of disruption. BBYO On Demand also helped us process the murder of George Floyd and explore topics of racial justice as we watched social unrest engulf our communities.    Through all that was going on in the world, our resiliency and creativity allowed us to go through it together. The BBYO Movement reached more teens in the last year than ever before, expanding to 37 new communities across the world, from Brazil to the Netherlands. And while the statistics look great, there is an even more important story— the narrative of BBYO serving as a support system and sense of community to teens who needed it more than ever.  Thanks to your support and generosity, we were able to pivot and provide this foundation at a moment of incredible need, and we are now poised to re-emerge on the other side of this crisis stronger than ever. We are truly grateful for your partnership in bringing teens a supportive environment that promotes the resiliency and confidence they need to carry them through the darkest moments. And, because our theme was Tomorrow Happens Here, we will all certainly benefit from the light that they create. Warmly,

experiences that inspire a lasting connection to the Jewish people.

BY TEENS, FOR TEENS At August Execs, an annual convening of community presidents led by BBYO’s International Board, more than 100 Alephs

Throughout the year, BBYO teens strengthened skills in collaboration, communication, and adaptive leadership, working to enrich their communities at the local, regional, and international level.

and BBGs gathered to set the Movement agenda for the year and to align on strategies and priorities.

B BYO AR OUND THE WORLD

Relaunched in fall 2019, teens in BBYO Finland have expanded the community to become one of BBYO’s most active worldwide— engaging nearly 80 members across the country in innovative leadership experiences. 04

celebrated its one-year anniversary this year

connection to BBGs and young alumnae.

and fostered a community of BBGs, alumni, and visionary female Jewish leaders through leadership opportunities, mentorship, and

The inaugural cohort of the WLI Fellowship

launched in April, offering leadership training and mentorship to a remarkable community of BBG alumnae aged 22â&amp;#x20AC;&amp;#x201C;26. Throughout the year, fellows learned from highly accomplished women in their fields and members of the Advisory Council, exploring new skills and insights at a pivotal stage of career growth.

the globe to improve their communities through service, philanthropy, and advocacy.

REGION SPOTLIGHT Teens in Delta Region adopted a pre-kindergarten classroom during the holiday season, helping to ensure that all students had a warm coat, gloves, pajamas, a book, and a grocery store gift card.

the people and communities hit hardest by the COVID-19 pandemic—raising funds for the NAACP and Direct Relief. 06

G LOB AL S HAB B AT 2019 Global Shabbat provided teens with the opportunity to build crossgenerational relationships while exploring leadership lessons and insights. This year’s event united the Movement around the theme “With All Our Might,” connecting Alephs and BBGs with local business professionals, faith leaders, activists, and inspiring changemakers as they lit the Shabbat candles together and dove deeper into the critical causes they care about.

REGION SPOTLIGHT Alephs and BBGs in Mountain Region partnered with a local synagogue and the Phoenix Holocaust Association for Global Shabbat, inviting three Holocaust survivors to a powerful dinner, discussion, and Havdalah service with teens across the community. BBYO.ORG | 07

STRENGTHENING CONNECTIONS &amp; COMMUNITY Alephs and BBGs discovered lifelong friendships and a sense of belonging through BBYO, while working to build welcoming, inclusive, and supportive spaces for Jewish teens across the globe.

REGION SPOTLIGHT Regional conventions are a hallmark of the BBYO experience, providing teens with authentic leadership opportunities and an inclusive space to build friendships, explore their Judaism, and connect with one another. In October, over 100 teens in Central Region West gathered for a convention exploring the theme “Looking Through a New Lens,” where Alephs and BBGs led and participated in creative Shabbat experiences, service opportunities, and learning sessions.

A G LOB AL COMMUNITY In February, 243 Alephs and BBGs from countries across the world gathered in Dallas for Global Ambassadors Week—a special opportunity for teens from outside North America to build relationships with one another and with the host community before International Convention. Members enjoyed Shabbat with local families and bonded with peers in North Texas Oklahoma Region at a community Havdalah and dance on Saturday night. 08

INTER NATIONA L C ONV ENTION 2020: TOMOR R OW HAPPENS HERE With thousands of teens, educators, renowned speakers, global leaders, and trailblazers hailing from across the globe, BBYO International Convention, which took place February 13â&amp;#x20AC;&amp;#x201C;17 in Dallas, Texas, was our most epic yet. Together, we celebrated the vibrancy of our Movement with five days of community-building, service opportunities, learning sessions, leadership development, and unforgettable experiences.

THE LAUNCH OF BBYO ON DEMAND Amidst a global shutdown and pandemic, BBYO On Demand launched nearly overnight in March and provided a powerful source of connection and community to teens as they navigated a time of uncertainty and change. Called the â&amp;#x20AC;&amp;#x153;Jewish Netflix of live-streamed teen programmingâ&amp;#x20AC;? by the press, BBYO On Demand transformed

BY THE NUMBERS In its first three months alone, BBYO On Demand hosted thousands of programs, offering innovative experiences and content to teens socially distanced from their peers.

KEEPING TEENS C ONNEC TED Each week, Virtual Shabbat and Havdalah provided a space for connection, reflection, and inspiration to hundreds of teens across the Movement, with uplifting and engaging Movement-wide gatherings hosted by BBYO teens in Latin America, Israel, Australia, Eastern Europe, and beyond.

MARK CUBAN Entrepreneur and Owner of the Dallas Mavericks

teens explored leadership skills and learned directly from changemakers and role models across the globe, from

celebrities and industry icons to educators, activists, artists, and entrepreneurs.

CREATIVITY &amp; INNOVATION In the face of unexpected challenges and disruptions this year, BBYO teens worked

IMPACTING OUR C OMMUNITIES Over 5,736 teens in 30 countries participated in the firstever virtual J-Serve: International Day of Jewish Youth Service, completing 22,944 hours of service across 250 communities. The day culminated in a powerful Celebration of Service and Philanthropy, with teens raising and allocating funds to organizations addressing the spread and impact of COVID-19 as part of the world’s largest Jewish teen giving circle.

tirelessly to transform BBYO experiences into reimagined virtual events— demonstrating the spirit of resiliency that has defined BBYO for nearly a century.

REGION SPOTLIGHT Throughout the spring, teens around the world organized virtual conventions through BBYO On Demand, transforming their regional traditions and experiences into dynamic digital gatherings. In Greater Jersey Hudson River Region, teens took inspiration from International Kallah, a BBYO summer experience focused on Jewish enrichment, and planned a weekend of digital programs exploring art, music, social media, and sports as a means to connect with Judaism.

CELEB R ATING TOG ETHER In the weeks leading up to Shavuot, teens launched a global effort to study all 54 parshiyot (Torah portions)—kicking off with a celebratory virtual Lag BaOmer bonfire. Teens from Turkey to Germany and across Latin and North America designed and led creative learning experiences connected to 12

B BYO S U MMER EXPERIENC ES R EIMAG I NED With summer programs unable to convene safely in person, BBYO quickly pivoted to provide exceptional digital experiences to nearly 700 Jewish teens around the world. These programs provided critical connection and support to teens, and a powerful platform to explore their Judaism, build their character, and discover transformative leadership skills.

change the lives of Jewish teens around the world, helping them connect to Judaism in a way that is meaningful

a gift to BBYO. BBYO

to them and growing

LEGACY SOCIETY BBYO is deeply grateful to individuals and families who have included provisions for BBYO in their estates.