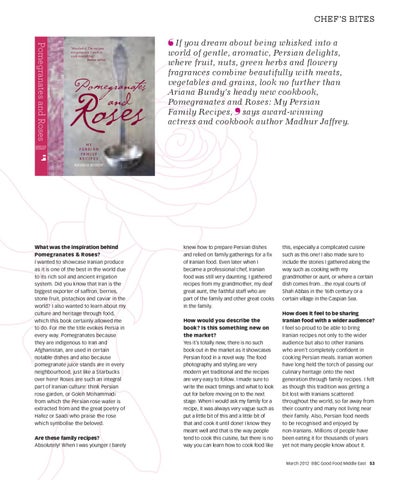 &#39;Wonderful. The recipes are gorgeous. I want to cook everything.&#39; Madhur Jaffrey

If you dream about being whisked into a world of gentle, aromatic, Persian delights, where fruit, nuts, green herbs and flowery fragrances combine beautifully with meats, vegetables and grains, look no further than Ariana Bundy’s heady new cookbook, Pomegranates and Roses: My Persian Family Recipes, says award-winning actress and cookbook author Madhur Jaffrey.

What was the inspiration behind Pomegranates &amp; Roses? I wanted to showcase Iranian produce as it is one of the best in the world due to its rich soil and ancient irrigation system. Did you know that Iran is the biggest exporter of saffron, berries, stone fruit, pistachios and caviar in the world? I also wanted to learn about my culture and heritage through food, which this book certainly allowed me to do. For me the title evokes Persia in every way. Pomegranates because they are indigenous to Iran and Afghanistan, are used in certain notable dishes and also because pomegranate juice stands are in every neighbourhood, just like a Starbucks over here! Roses are such an integral part of Iranian culture: think Persian rose garden, or Goleh Mohammadi from which the Persian rose water is extracted from and the great poetry of Hafez or Saadi who praise the rose which symbolise the beloved. Are these family recipes? Absolutely! When I was younger I barely

knew how to prepare Persian dishes and relied on family gatherings for a fix of Iranian food. Even later when I became a professional chef, Iranian food was still very daunting. I gathered recipes from my grandmother, my deaf great aunt, the faithful staff who are part of the family and other great cooks in the family. How would you describe the book? Is this something new on the market? Yes it’s totally new, there is no such book out in the market as it showcases Persian food in a novel way. The food photography and styling are very modern yet traditional and the recipes are very easy to follow. I made sure to write the exact timings and what to look out for before moving on to the next stage. When I would ask my family for a recipe, it was always very vague such as put a little bit of this and a little bit of that and cook it until done! I know they meant well and that is the way people tend to cook this cuisine, but there is no way you can learn how to cook food like

this, especially a complicated cuisine such as this one! I also made sure to include the stories I gathered along the way such as cooking with my grandmother or aunt, or where a certain dish comes from…the royal courts of Shah Abbas in the 16th century or a certain village in the Caspian Sea. How does it feel to be sharing Iranian food with a wider audience? I feel so proud to be able to bring Iranian recipes not only to the wider audience but also to other Iranians who aren’t completely confident in cooking Persian meals. Iranian women have long held the torch of passing our culinary heritage onto the next generation through family recipes. I felt as though this tradition was getting a bit lost with Iranians scattered throughout the world, so far away from their country and many not living near their family. Also, Persian food needs to be recognised and enjoyed by non-Iranians. Millions of people have been eating it for thousands of years yet not many people know about it.

March 2012 Issue | BBC Good Food Middle East is a must-have for everyone who loves cooking and eating. It’s full of mouth-watering ideas for quick everyday dishes, inspirational entertaining and any recipes you’ve ever dreamt of – all devised to save you time and effort. Food news, chef interviews, what’s new in the shops, gadgets, tips, giveaways and competitions – you’ll find it all in BBC Good Food Middle East. Elegantly designed, the magazine is full of beautiful photography and engaging features that showcase the best culinary experiences this region has to offer. 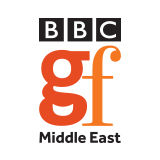