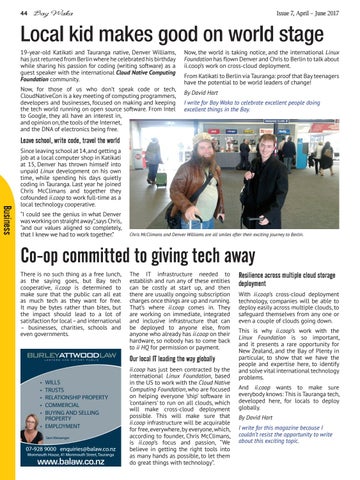 Local kid makes good on world stage 19-year-old Katikati and Tauranga native, Denver Williams, has just returned from Berlin where he celebrated his birthday while sharing his passion for coding (writing software) as a guest speaker with the international Cloud Native Computing Foundation community. Now, for those of us who don’t speak code or tech, CloudNativeCon is a key meeting of computing programmers, developers and businesses, focused on making and keeping the tech world running on open source software. From Intel to Google, they all have an interest in, and opinion on, the tools of the Internet, and the DNA of electronics being free.

Now, the world is taking notice, and the international Linux Foundation has flown Denver and Chris to Berlin to talk about ii.coop’s work on cross-cloud deployment. From Katikati to Berlin via Tauranga: proof that Bay teenagers have the potential to be world leaders of change! By David Hart I write for Bay Waka to celebrate excellent people doing excellent things in the Bay.

Since leaving school at 14, and getting a job at a local computer shop in Katikati at 15, Denver has thrown himself into unpaid Linux development on his own time, while spending his days quietly coding in Tauranga. Last year he joined Chris McClimans and together they cofounded ii.coop to work full-time as a local technology cooperative. “I could see the genius in what Denver was working on straight away”, says Chris, “and our values aligned so completely, that I knew we had to work together.”

Chris McClimans and Denver Williams are all smiles after their exciting journey to Berlin.

Co-op committed to giving tech away There is no such thing as a free lunch, as the saying goes, but Bay tech cooperative, ii.coop is determined to make sure that the public can all eat as much tech as they want for free. It may be bytes rather than bites, but the impact should lead to a lot of satisfaction for local – and international – businesses, charities, schools and even governments.

The IT infrastructure needed to establish and run any of these entities can be costly at start up, and then there are usually ongoing subscription charges once things are up and running. That’s where ii.coop comes in. They are working on immediate, integrated and inclusive infrastructure that can be deployed to anyone else, from anyone who already has ii.coop on their hardware, so nobody has to come back to ii HQ for permission or payment.

ii.coop has just been contracted by the international Linux Foundation, based in the US to work with the Cloud Native Computing Foundation, who are focused on helping everyone ‘ship’ software in ‘containers’ to run on all clouds, which will make cross-cloud deployment possible. This will make sure that ii.coop infrastructure will be acquirable for free, everywhere, by everyone, which, according to founder, Chris McClimans, is ii.coop’s focus and passion, “We believe in getting the right tools into as many hands as possible, to let them do great things with technology”.

Resilience across multiple cloud storage deployment With ii.coop’s cross-cloud deployment technology, companies will be able to deploy easily across multiple clouds, to safeguard themselves from any one or even a couple of clouds going down. This is why ii.coop’s work with the Linux Foundation is so important, and it presents a rare opportunity for New Zealand, and the Bay of Plenty in particular, to show that we have the people and expertise here, to identify and solve vital international technology problems. And ii.coop wants to make sure everybody knows: This is Tauranga tech, developed here, for locals to deploy globally. By David Hart I write for this magazine because I couldn’t resist the opportunity to write about this exciting topic.

[ Issue 7 - Print run 15,000 ] The exclusive community companion delivered to letterboxes in the suburbs of Welcome Bay, Hairini, Ohauiti, Oropi, Maungatapu, Matapihi, RD3 and RD5 (9,000 copies). By 2017, an additional 6,000 copies are distributed from libraries, schools and public places around the city of Tauranga. 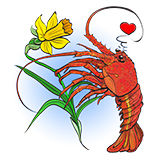